(This article was originally published by the National Museum of American History’s blog, O Say Can you See?)

Recently U.S. Senator Bernard Sanders from Vermont wrote to the museum and gently chastised us for selling small busts of the U.S. presidents. He wasn’t challenging the notion of a souvenir toy; rather he questioned why they were being made in China. 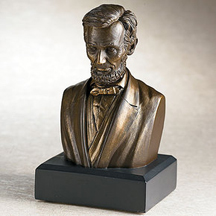 The Lincoln bust sold by the Smithsonian store.

This raises a good question: what does it mean to be Made in America? As a curator who has spent a lifetime studying industrial history I often come across the popular belief that unemployment in the United States is a result of the trend towards offshore production.  In fact, Americans have been buying foreign goods since the formation of the country. Trade as well as manufacturing location is historically important to the development of the nation.  In the late 1700s Americans actually bought a surprising amount from distant countries. Martha Washington owned a dress made from Chinese silk and in the 1830s an enterprising American company, Carnes Brothers, began to experiment in Chinese production of cheap novelties for the U.S. market. 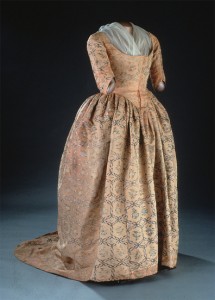 Martha Washington's dress from the early 1780s is made from silk taffeta woven and painted in China.

Years ago I co-curated an exhibition on sweatshops and in the show we asked our visitors to go to their closet, make a list of where the clothes were manufactured, and speculate on why. To help, we provided a table of labor rates from around the world. Of course, our challenge was somewhat of a trick question because there are so many invisible factors that identifying the real source of production is often difficult to ascertain.

As an example, for the manufacture of a simple tee shirt, the cotton may be grown in one country, but the tractor used to plow the field was likely manufactured elsewhere, and the fertilizer that made  the plants grow may come from yet a third. The raw cotton may be spun into thread in one location then woven into fabric and dyed elsewhere. The shirt pieces might be cut in one country, sewn in another, and finished and tagged in yet another location. Even if you can answer these questions you have to determine where the shirt was designed, who moved the goods, who marketed the product and sold the garment. Yikes! The list goes on almost endlessly. Pietra Rivoli has written an outstanding book, The Travels of a T-Shirt in the Global Economy, that explores this complex idea.

While it certainly is ironic that the national museum is selling models of the U.S. presidents made in another country, it isn’t very surprising. Today many products (especially low cost items like toys) are sourced in China. While the United States might lose the actual manufacturing work, the bulk of the profit often goes to American companies doing design, prototypes, and marketing. As a country, retaining the 50 cents of labor on a $10 item is less important than the $9.50 of indirect costs. 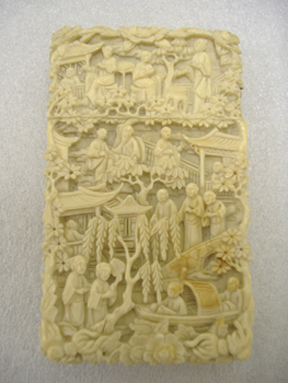 Card case made in China during the 1830s for the U.S. market.

For historians another way of looking at the impact of business on the American experience is from the perspective of the consumer. Currently staff at the National Museum of American History are developing a new exhibition called American Enterprise. The show’s theme is an examination of the American marketplace – the dynamic interplay between consumers and producers. What a product costs is very important because it affects how many people will buy it. For about 100 years the United States has been the world’s largest economy and to a great extent it is because of our ongoing national beliefs in competition, innovation, opportunity, and stable rules.

In our research for American Enterprise we have been visiting factories and farms around the country. Last fall we toured the giant Caterpillar plant in Decatur, Illinois. There we saw highly trained workers using high tech equipment to make state of the art earth moving equipment. Many of the machines are exported to customers around the world, including China. As a nation we can’t make everything; given a choice I am pretty sure we would rather have Americans manufacturing earth movers and let the Chinese people make the toy models of our presidents. 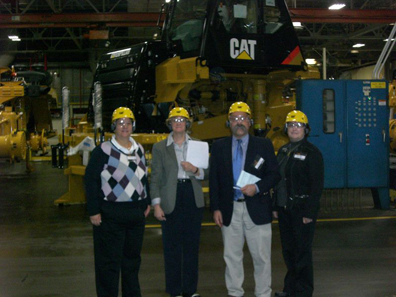 The Smithsonian team visiting the Caterpillar plant in Decatur, Ill. 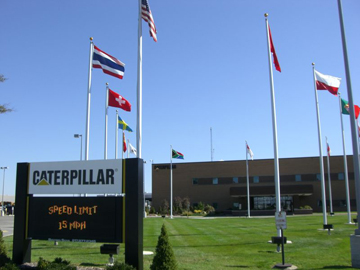 To honor their customers, Caterpillar flies a large group of international flags outside their Decatur plant.

Peter Liebhold is Chair and Curator of the Division of Work and Industry at the National Museum of American History.

“For Love of Liberty: The Story of America’s Black Patriots”

From the Secretary: “Elvis at 21”—A mirror on America