Home Collaboration Education & Outreach Capture the magic of the moment

This post by Catherine Sheytenburg was originally published by the Smithsonian Institution Archives blog, The Bigger Picture.

The 4th of July is coming up next week, promising picnics, gatherings and of course, fireworks. You may have noticed that the magic of fireworks is very challenging to capture on camera. Smithsonian photographers would agree, but they also have years of experience capturing fireworks at inaugurations, special events, and at the 4th of July celebration on the National Mall. Follow their expert advice below to ensure that you take the best possible photographs at your celebration, whether you’re in your backyard or in DC. 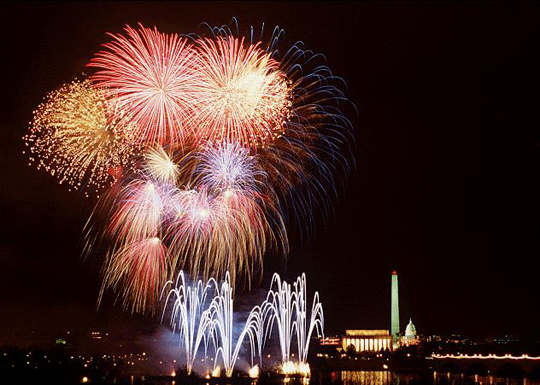 Smithsonian photographer Nicholas Parrella captured this spectacular series of bursts with the US Capitol, Washington Monument and Lincoln Memorial all in the background, These fireworks were part of the Clinton Presidential Inaugural events, 1993, Smithsonian Photographic Services.

Photographer Ken Rahaim’s first suggestion is to anticipate where the fireworks show will occur and scout your shooting position in advance. Smithsonian photographer Eric Long adds that it is desirable to “have something in the photo that’s identifiable.” That might be an iconic building or landmark in your hometown, or as is often the case on the Mall, one or more of the National monuments. “Having water in the foreground to reflect the fireworks also works well,” Long continues.

Aside from the National Mall itself, other suggested vantage points of fireworks on the Mall include across the Potomac River near the Iwo Jima Memorial—a view, photographer Nick Parrella explains, where you can line up “the Lincoln Memorial, Washington Monument and Capitol in the shot”; and the Arlington side of the Potomac, which photographer Jeff Tinsley notes, one can use the river and numerous small boats anchored there as an effective foreground. 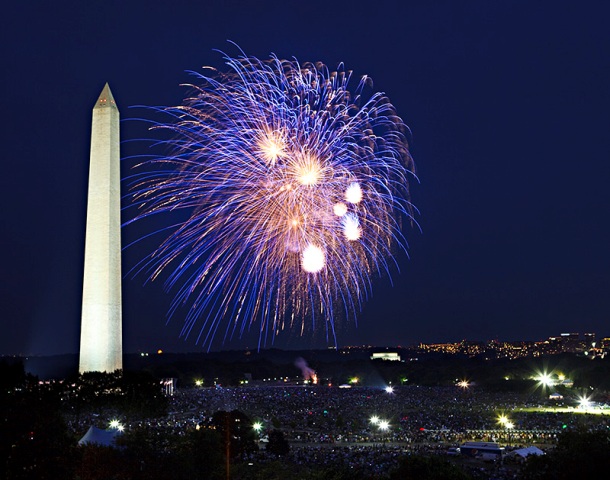 Ken Rahaim uses the Washington Monument not only as a framing element in my photos but also to show scale of enormous firework bursts on the National Mall, 1999, Ken Rahaim, Smithsonian Photographic Services. 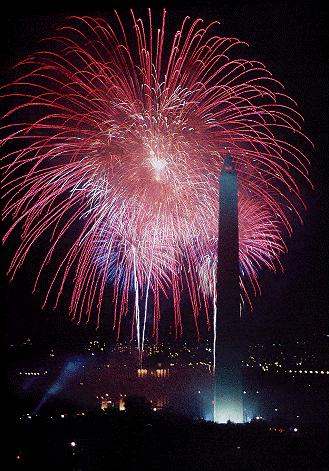 Positioned on the top of the main tower of the Smithsonian Castle Building, Alan Hart captured this sky-filled series of bursts behind the Washington Monument during the Desert Storm Victory Celebration, 1995, Smithsonian Photographic Services.

Ken Rahaim advises that providing scale for firework bursts when framing your image is important: “While bursts in isolation are beautiful, adding some scale will enhance the bursts by emphasizing their size.” Rahaim continues, “Another technique used to add scale to your composition is to include silhouettes of onlookers in the foreground. This has the added benefit of providing a human element to your photographs which help to engage the viewers of your image.”

Photographing fireworks from an unexpected location or vantage point can also make for a unique photo. Smithsonian photographer Alan Hart has had the enviable position of photographing fireworks from the top of the tower at the Smithsonian Castle Building: “It put me just high enough to get a perfect silhouette of the Washington Monument in front of the spectacular bursts.”  While not everyone can shoot photos from these kinds of locations, anyone can think about ways to get a more creative shot.

Have all your equipment ready to go 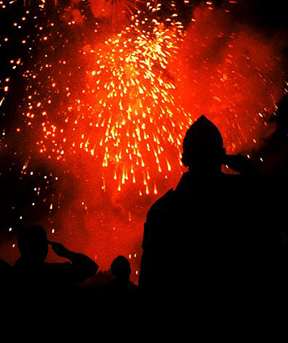 Rahaim explains, “It’ll come in handy should you need to dig into your camera bag or read any of the un-illuminated button labels on your camera.”

Set your initial camera settings before the show begins
Settings such as shutter speed, aperture, ISO, and focal point should be decided before you start taking photographs. Ken Rahaim says, “Naturally, during the show you can make adjustments to shutter speed but you want your baseline settings in place well before the show starts.”

Find out which way the wind is blowing and get upwind

This practical suggestion comes from photographer Richard Strauss, who notes: “Fireworks create smoke and if the wind blows it towards your position it not only blocks the shot but makes it uncomfortable to shoot. From the right position you can use the smoke to your advantage. As the fireworks program builds, the smoke reflects light and can help define the shot.” 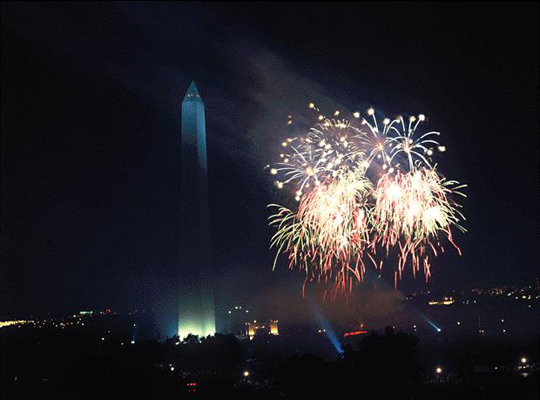 Richard Strauss shot these Desert Storm Victory Celebration fireworks from the roof of the National Museum of American History, 1995, Note the effect of the smoke from the bursts blowing towards the Washington Monument, Smithsonian Photographic Services.

It may seem obvious, but using a tripod helps you keep the camera steady and obtain sharper photos; it allows you to take a photo without having to look through the viewfinder; and it can aid careful composition of a photograph. Ken Rahaim adds: “Once you’ve chosen your position, compose and frame your image securing your camera in place with the tripod. You might have to make minor adjustments to your framing once the show begins but that should only take a few seconds.”

The kind of camera you use really doesn’t matter as long as you can manually control it.
Whether you’re using an old-fashioned film camera or a digital camera, manual control is imperative since auto-focusing is dependent on contrast, which is very difficult to achieve at night in low light.

Most of the time, if your camera is even able to achieve auto-focus, by the time you shoot the burst you were anticipating will have passed its peak. So, Rahaim suggests setting your digital camera to manual focus and doing one of two things: 1) pre-focus on an object within the area of the fireworks burst or 2) set your focus to infinity.

Almost any lens, wide-angle or telephoto, that gives the desired perspective will work, and since on film cameras the exposures will usually be at f/8 or f/11, a fast lens isn’t necessary.

Shutter speed is the most influential variable in capturing fireworks 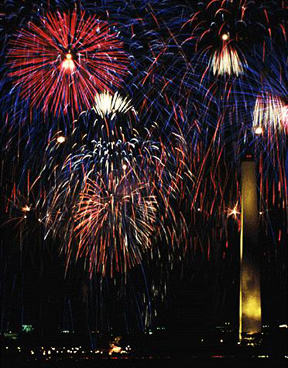 By timing his exposures, Jeff Tinsley was able to compose this photo filling the sky evenly with bursts and exposing only for red, white and blue, These fireworks are from the Second Reagan Presidential Inaugural, Smithsonian Photographic Services.

Ken Rahaim notes that with digital cameras, the shutter speed will be relatively long when photographing fireworks. In his photos here, the shutter speed was between 3 and 4 seconds. He explains, “The combination of your camera’s shutter speed & the duration of the burst’s illumination will determine the ‘length’ of the fireworks’ ‘trails’ that are recorded on your sensor.” Long shutter speeds also have the disadvantage of introducing motion blur into the image. Rahaim explains that a camera tripod will go a long way to counteract this issue, but additionally, “if you have a remote shutter trigger it will further reduce blur inducing camera vibration by allowing you to keep your hands off the camera.”

With film cameras, most Smithsonian photographers start with a basic exposure of f/8 and 4-seconds for ISO-64 film, and bracket their exposures during the fireworks show. Other tips from photographers Richard Strauss, Jeff Tinsley, and Alan Hart include: opening the lens just before a burst is launched to capture the fiery streak climbing skyward, as well as the burst itself; setting the shutter speed to “B” (Bulb) and using a locking cable release for timed exposures; locking the shutter open while covering the lens with a black cardboard card, and uncovering the lens periodically to accumulate bursts; and waiting until the sky goes dark again before closing the shutter.

Some final considerations for those of you using digital cameras versus old-fashioned film?
If you’re shooting with a digital camera, ISO is the second most important variable. Ken Rahaim elaborates: “For digital cameras, higher ISO settings introduce noise. Digital noise is exacerbated in shadow areas and, not surprisingly, in low light, nighttime photography. Keeping your ISO setting as low as possible will help alleviate the noise issue.” His photos her, for example, were shot at ISO settings of 50 to 200 (depending on shutter speed).

With a digital camera, shoot as much as possible!

Ken Rahaim suggests, “Although you should try to anticipate the bursts and gauge their rhythm, don’t be shy about taking a lot of pictures. This is the digital age after all, and you’re not paying for film anymore. That said, consider your time spent reviewing all your images before switching to motordrive mode!” 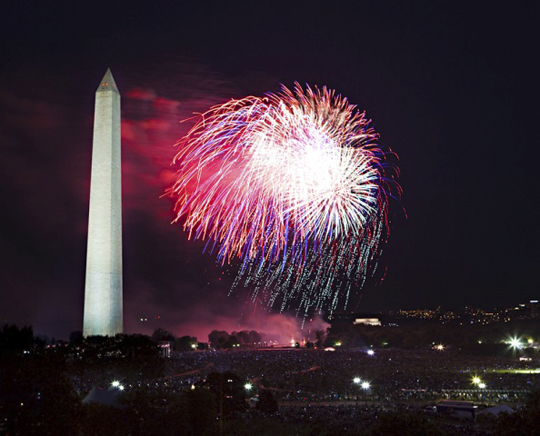 Fireworks on the National Mall for July 4, 2009, by Ken Rahaim, Smithsonian Photographic Services.

But if you are shooting with old-fashioned film… think about the type of (and how much!) film you use.
Most Smithsonian photographers recommend using a slower speed (ISO 64 or 100) slide film. Some, like Talman, prefer color negative film because, “it has greater exposure latitude and contrast control.” Preferences for daylight vs. tungsten film also vary: some feel that tungsten can be better for the  artificial light produced by fireworks; but others feel that daylight film can have warmer saturation, truer color, and be better for areas where there are mixed sources of light. And save some of that film for the grand finale since, as Eric Long observes “The programs usually get better as they progress,” and the best shots are typically at the end of the show.

Thank you to the Smithsonian photographers for their expert advice, and everyone have a safe and happy Fourth of July, full of masterful photographs!

The evolution of fireworks