The Torch spoke with Secretary Clough, our own in-house expert  on earthquakes, to get his observations on the quake that struck the East Coast on Aug. 23, and its effect on the Smithsonian.

Q: Secretary Clough, I understand you have some experience studying the effects of earthquakes. Can you tell me a little about your background in this area? 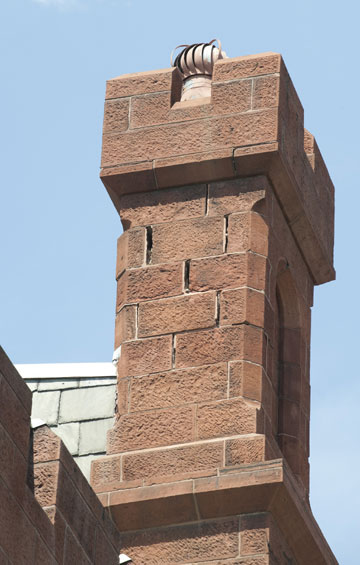 The earthquake’s force and swaying caused damage to this chimney atop the Smithsonian Castle. These top-heavy structures are held together mostly with mortar, which cracked and separated during the quake, causing the massive sandstone blocks to shift dangerously.

A: As a graduate student at the University of California at Berkeley I got interested in earthquakes and how they work. Eventually I became a civil engineer, really a geotechnical engineer, which means I focus on the connections between geology, seismicity and engineering. These are the topics on which I focused my teaching and research while a professor at Stanford University. Since then I have spent a large part of my career serving on earthquake engineering research teams visiting damage sites all over the world to understand how earthquakes work and what lessons we can learn from them. I have studied earthquakes and their effects in Guatemala, Nicaragua, Algeria, Haiti and Alaska and have seen and felt a lot of earthquakes.

Q: Where were you when the earthquake struck D.C. earlier this week and what were your thoughts as it was happening?

A: I was in a meeting with some Regents and senior staff in a room on the second floor of the Smithsonian Castle, at the east end of the building. When I first felt the rumbling, I didn’t immediately think it was a quake because they are not very common in this part of the world. My first thought was that a truck had plowed into the Castle, but as the shaking got stronger, I knew  it was an earthquake. I told everyone to find some place stable to ride it out, preferably under a doorway or beneath the table.

As the quake was occurring, I did what I was trained to do and really concentrated on the type and duration of shaking that we were feeling. There are two kinds of energy waves that earthquakes produce: compression waves and shear waves. These waves produce different types of movement and move at different rates of speed. If you concentrate on what you are feeling and when you are feeling it, you can calculate the magnitude of the quake and your distance from the epicenter. Based on what I felt, I thought it was about a magnitude 6 and approximately 100 miles away. [Note: The U.S. Geological Survey concluded that the quake was a magnitude 5.8 and centered about 100 miles away in Mineral, Va.] 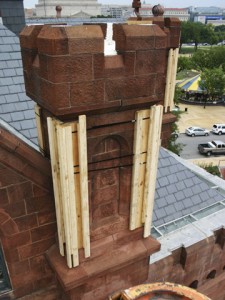 Work crews have temporarily stabilized the damaged chimneys and turrets by securing them with plywood and nylon strapping until permanent repairs can be made.

Q: Were you scared?

A: Well, when the shaking got stronger after an initial pause, and I heard the building groan, I did get a little worried.

Q: What were you worried about?

A: Mostly I was worried about the safety of our staff and visitors–that is always my first priority. The biggest danger in an earthquake is from things falling down on people, and from the strength of the quake I was worried that, especially in the Castle, we could have some problems with the towers and chimneys on top of the building and the plaster and fixtures inside. I was really relieved that no one was hurt and that the damage we sustained, given the number and average age of our buildings, was not more severe.

Q: How badly damaged are our buildings  and what is being done to repair them?

A number of turrets and chimneys on top of the Castle sustained some cracking since they are very top heavy and held together mostly by mortar, which crumbled under the weight and contortion of the swaying. We are working now to temporarily stabilize those structures with plywood and nylon strapping to ensure they are secure and will not break further or fall down, even if we get some heavy winds this weekend due to the hurricane.

Damage can be clearly seen under a stairwell at the Museum Support Center. Red sprinkler pipes like the ones seen in this photograph pulled away from the ceiling in some places and caused minor flooding in the building.

But the more significant damage was out at our Museum Support Center where the design of the building may have contributed to the kinds of damage we saw out there. The way in which walls and floors connect and are joined to the building caused some damage to walls and stairwells that we are working now to repair and stabilize, but which will likely require extensive restoration work in the months to come. In addition, some sprinkler pipes twisted away from the ceiling and burst open, spraying water on some areas of the second floor and causing some minor flooding in different areas. We avoided major damage to collections at MSC only because of the fast action of some of our staff who shut off the water and worked through the night to drain and dry these areas. I am very proud of the way our people responded to this emergency, especially when it was one that very few of us could have foreseen. If only we could speak the language of the orangutans out at the Zoo, then we would have known something bad was on the way. 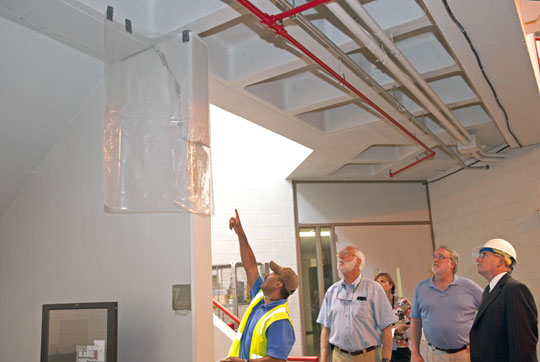 Staff from the Office of Facilities Engineering and Operations and Secretary Clough inspect cracking in walls at the Museum Support Center.

Q: What did we learn from this event and what might we do differently in the future if it ever happens again?

A: I am very proud of the way we handled this event. From the calm and orderly evacuation of our buildings led by the Office of Protection Services, to the expert response of staff in the Office of Facilities Engineering and Operations, to the individual acts of vigilance and care that many staff have taken to secure collections and alert us to damage in their buildings, I think we have all pulled together in a tremendous way. As for what we have learned, I think these conclusions are going to emerge over time as we understand better how our buildings responded and what we’ll need to do to repair them. But I’m confident that since the Smithsonian approaches these kinds of challenges with the same intellectual rigor we apply to scholarly research, I know we will learn something and we will put it to good use. 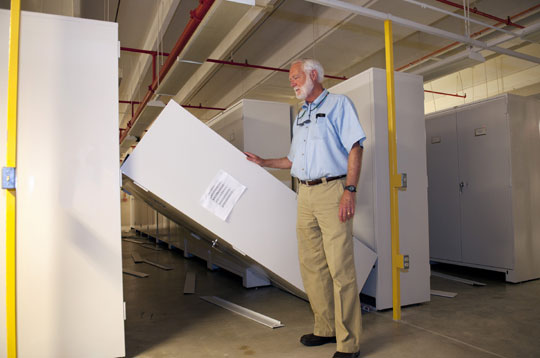 Empty collections storage cabinets at the Museum Support Center “walked” across the floor during the earthquake, causing some to topple over.

Where were you the day the earth moved?

Secretary Clough weighs in on the Zoo’s growing lion pride