Smithsonian scientists have discovered two new, closely related bee species: one from Coiba Island in Panama and another from northern Colombia. Both descended from of a group of stingless bees that originated in the Amazon and moved into Central America, the ancestors of Mayan honeybees. The presence of one of these new species on Coiba and Rancheria Islands, and its absence from the nearby mainland, is a mystery that will ultimately shed light on Panama’s history and abundant biodiversity.

At almost 200 square miles, Coiba Island is the largest offshore island along the Pacific coast of Latin America. Rancheria Island is a much smaller neighbor. The species name, insularis, of the new bee from Coiba, Melipona insularis, means “island.” This is the first species in its group to be found on islands near the mainland. 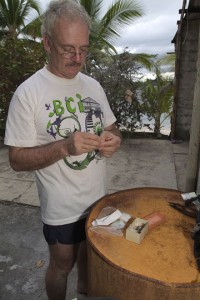 “These forest bees have a small range over which they can establish new nests and colonies,” says David Roubik, staff scientist at the Smithsonian Tropical Research Institute. “They can’t establish a new nest across more than a short stretch of open water because workers from the original nest have to build and supply the new nest before the new queen moves in.”

Either several entire tree-cavity nests arrived on Coiba and Rancheria in floating mats of vegetation or a land connection existed between the island and the mainland before the bees disappeared from the mainland.

Sea level has risen and fallen dramatically in the past. During ice ages, when much of the Earth’s water is locked up in polar caps and glaciers, sea level drops in Panama. The sea floor between Coiba and the mainland, and between Coiba and neighboring Rancheria Island where the bee was also found, is never more than about 300 feet below the surface. Five other stingless bee species on Coiba are widespread on the mainland and on many little islands that were connected to the mainland during glaciations. Those bees are relative newcomers that may have arrived during past drops in sea level when the islands were reconnected to the mainland.

Roubik thinks the ancestors of Melipona (Melikerria) ambigua, the new species from Colombia, gave rise both to the new Coiba bee and the honeybees cultivated by Mayans in Mexico and Central America. Even if a drop in sea level explains how the bees got from the mainland to the island, their discovery that the bees had already established in Central America around 17 million years ago spurs an ongoing debate about the age of the connection between North and South America. Traditionally, geologists think that the Panama land bridge arose by tectonic and volcanic action to connect the two continents about 3 million years ago. 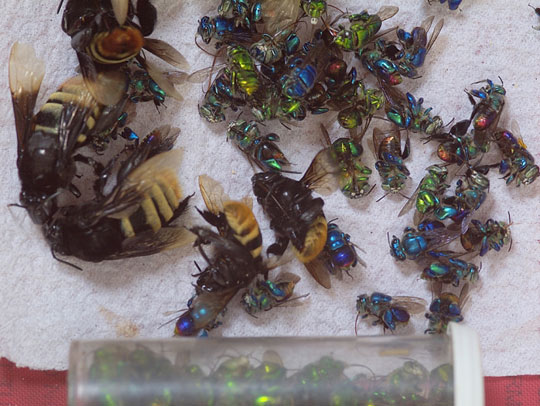 David Roubik, STRI staff scientist, attracts bees by applying scents to paper cards. As bees come to collect the scents, Dave nets them so that he can see the characteristics that distinguish one species from another. Melipona insularis, the new bee species from Coiba Island in Panama, has fuzzy yellow hairs on its abdomen. (Photo by Marcos Guerra)

“Our studies of the genetic relationships between these bees tells us that they originated in the Amazon about 22 million years ago and that they moved north into Central America before 3 million years ago,” said Roubik. “This actually agrees with new evidence that geologists working in the earthworks created by the Panama Canal expansion project are finding. We think that a land bridge may have formed as early as 12 million years ago.”

Not only does the age of the continental connection remain unresolved, there are more questions, such as what happened to the bees that used to be on the mainland and are no longer there now?

Panama’s wealth of biodiversity may be a direct result of the complicated geological history of the area. Only by combining geological evidence, genetic evidence and observations of how organisms behave and respond to change in natural areas like Coiba National Park, can scientists begin to understand the puzzle that is Panama. 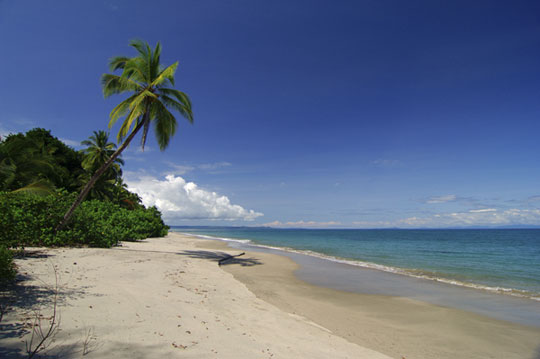 About the Author: Elisabeth King

Elisabeth King is a science interpreter for the Smithsonian Tropical Research Institute. In Panama since 1992, Beth bridges the gap between research scientists and diverse audiences. She has created bilingual exhibitions, written press releases and fielded questions from reporters, hosted journalists and presented STRI research to audiences ranging from school kids to ambassadors.