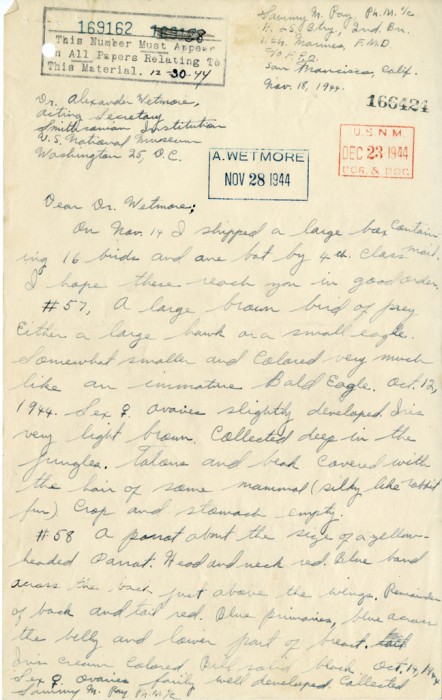 A letter to Alexander Wetmore from Sammy Ray, November 18, 1944, about his bird-collecting efforts in the Pacific islands during World War II.

November 18, 1944 Sammy M. Ray, a Pharmacist’s Mate 1st/C in the U.S. Navy, writes a seven-page letter to then Acting Smithsonian Secretary Alexander Wetmore. Ray and Wetmore maintained an active correspondence throughout Ray’s tour of duty (1942-1945), discussing Ray’s activities collecting birds in the Pacific Islands during World War II. Additionally, Ray tells Wetmore about living conditions, battling disease and war engagements in the Pacific. Ray was one of the many soldiers who collected specimens for the U.S. National Museum during the war. Ray’s specimens are housed in the National Museum of Natural History.