(Image: These color-enhanced views of Deimos, the smaller of the two moons of Mars, result from imaging on Feb. 21, 2009, by the High Resolution Imaging Science Experiment camera on NASA’s Mars Reconnaissance Orbiter.)

The Martian moons, Phobos and Deimos, may actually be the result of a giant impact that sent rocks and debris into orbit around Mars, instead of asteroids that were captured by the planet’s gravity as previously thought. After going into orbit, the material from the giant impact aggregated and formed into small, low-mass moons. This collision could also account for why Mars spins on its axis. This theory is presented in an article by Smithsonian scientist Robert Craddock at the Center for Earth and Planetary Studies to be published in the Icarus International Journal of Solar System Studies. 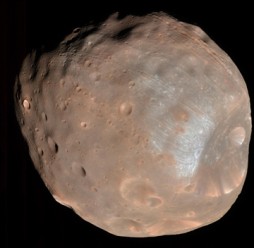 The HiRISE camera on NASA’s Mars Reconnaissance Orbiter took two images of the larger of Mars’ two moons, Phobos, within 10 minutes of each other on March 23, 2008. This is the first, taken from a distance of about 6,800 kilometers (about 4,200 miles).

In recent years, a number of separate observations suggest that the Martian satellites were the result of a giant impact. Similar to the Earth–Moon system, Mars has too much angular momentum; in both cases a giant impact may have caused the planets to spin on their axes. The giant impact on early Earth placed material into orbit that eventually formed the moon; it is likely that a giant impact on early Mars also placed material into orbit. Unlike what happened with the Earth’s moon, however, this material never coalesced into a single giant moon. Instead, a number of smaller moonlets formed. Over time the orbits of many of these moonlets probably decayed and the ended up crashing onto the surface Mars until only two were left.

The theory also explains the orbits of Phobos and Deimos. If they were captured asteroids, their orbits should be different and eccentric; their similar flat and circular orbits would be a natural consequence of having formed from material from a giant impact that was placed into orbit.

“Are Phobos and Deimos the Result of a Giant Impact?” will be published by Icarus International Journal of Solar System Studies and available online at http://tinyurl.com/23m7kky. 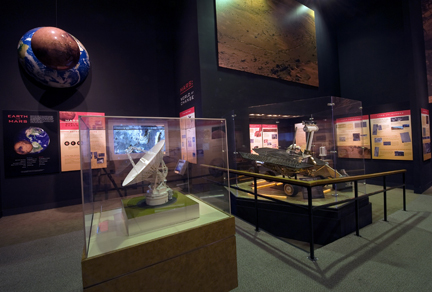 This Mars exhibit inside the Exploring the Planets gallery at the National Air and Space Museum features the results of the Mars Exploration Rovers, the Mars Reconnaissance Orbiter, Mars Express, and other recent spacecraft that have revolutionized our ideas about the surface, atmosphere, ice deposits, and ancient water on the Red Planet. (Photo by Eric Long)

The Lord of the Underworld gives up its secrets