Discovery, the longest-serving orbiter in the space shuttle fleet, will be accepted into the Smithsonian’s National Air and Space Museum collection. The space shuttle has been the icon for American space flight for a generation, and Discovery has flown every type of mission during its
27-year career.

After a period of preparation and delivery, the orbiter will be placed on display in the James S. McDonnell Space Hangar of the museum’s Steven F. Udvar-Hazy Center in Chantilly, Va. Occupying a central position in the space hangar and surrounded by scores of other major artifacts, Discovery will represent the drive to establish routine space transportation and to enable people to live and work in space for scientific and practical benefits. Space shuttle Enterprise, currently on display in the same location, has been showcased at the Udvar-Hazy Center since the center opened in 2003. Enterprise has been seen by almost 9 million visitors to the museum and it will continue to inspire and educate the public at its new home.

The decision to transfer Discovery to the National Air and Space Museum was announced by NASA April 12, the 30th anniversary of the space shuttle program. The museum’s collection contains hundreds of NASA artifacts, including spacecraft and spacesuits from the Mercury, Gemini, Apollo and Skylab programs and the shuttle era. 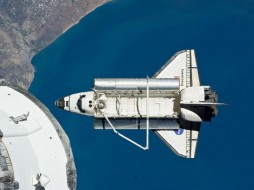 Space shuttle Discovery is seen after leaving the International Space Station where the combined crews of 12 astronauts and cosmonauts worked together for over a week. The area below is the coast of Morocco in the northern Atlantic. Image courtesy NASA, March 7, 2011

“NASA and the Smithsonian signed an agreement in 1967 that has enabled the National Air and Space Museum to preserve and display the greatest icons of our nation’s space history,” said Gen. J.R. “Jack” Dailey, director of the museum. “Honored for four decades, this agreement has served NASA, the Smithsonian and the public very well. The space collection enables us to explore major scientific achievements and share an inspiring aspect of the American experience.”

With the acquisition of Discovery, the museum adds to its holdings of aviation and space “firsts.”

“Fully a third of the museum’s collection of aircraft are one-of-a-kind examples or associated with milestone achievements,” said Valerie Neal, space shuttle program curator in the museum’s Division of Space History. “Discovery will join the ranks of treasures such as the 1903 Wright Flyer, the Spirit of St. Louis, the Mercury Friendship 7 capsule and the Apollo 11 Command Module Columbia. Discovery represents innovation, ingenuity and the effort to make spaceflight a regular activity in the life of the nation.”

Discovery flew 39 missions, including satellite deliveries, Defense Department projects and trips to the Hubble Space Telescope and the Russian space station Mir. It retired after having spent a total of 365 days in space and flown 13 times to the International Space Station, including the 100th shuttle mission in 2000. 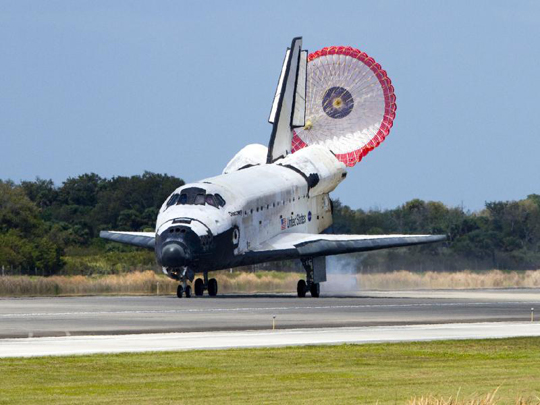 With its drag chute unfurled, space shuttle Discovery rolls down Runway 15 at the Shuttle Landing Facility at NASA's Kennedy Space Center in Florida on March 9, 2011. Landing was at 11:57 a.m. EST, completing the 13-day STS-133 mission to the International Space Station. Main gear touchdown was at 11:57:17 a.m., followed by nose gear touchdown at 11:57:28, and wheelstop at 11:58:14 a.m. On board were Commander Steve Lindsey, Pilot Eric Boe, and Mission Specialists Nicole Stott, Michael Barratt, Alvin Drew and Steve Bowen. Discovery and its six-member crew delivered the Permanent Multipurpose Module, packed with supplies and critical spare parts, as well as Robonaut 2, the dexterous humanoid astronaut helper, to the orbiting outpost. STS-133 was Discovery's 39th and final mission. This was the 133rd Space Shuttle Program mission and the 35th shuttle voyage to the space station. Image Credit: NASA/Jack Pfaller

Discovery is associated with several historic achievements. The first African American commander, Frederick Gregory, flew the craft in 1989. In 1995, the orbiter was flown by the first female pilot of a spacecraft, Eileen Collins, who later commanded a 2005 Discovery mission. In 1998 Sen. John Glenn, at age 77, flew on the spacecraft in a return to space, having made history in 1962 as the first American to orbit the Earth in Friendship 7. Following the Challenger and Columbia tragedies, Discovery was chosen to return to spaceflight.

A new mission for Discovery

In space, no one can see you sweat

To infinity and beyond! Buzz Lightyear lands at Air and Space