Home Feature Stories Where were you the day the earth moved?

The 5.8-magnitude earthquake centered northwest of Richmond, Va., shook much of Washington, D.C., Tuesday afternoon, rattling windows and nerves. The quake was felt as far north as New York City and Canada and as far west as Chicago. By West Coast standards, the 5.8-magnitude jolt is considered mild, but according to The Associated Press, it is the strongest to hit the eastern United States since the Second World War. 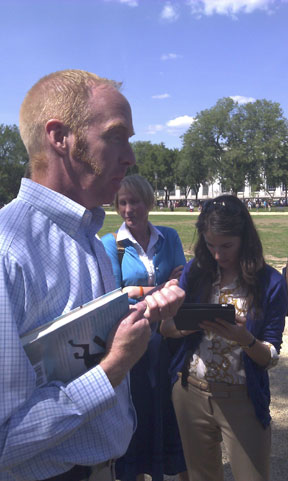 Staff from the Office of Public Affairs in the immediate aftermath of the quake. From left, Public Affairs Specialist for Science John Gibbons, Deputy Director for Communications Carolyn Martin and New Media Specialist Sarah Sulick. (Photo by Alex di Giovanni)

Smithsonian Secretary Wayne Clough, a structural engineer and earthquake expert, was as startled by the quake as everyone else. “We were having a meeting with some of my regents and education people. At first I thought it was a truck with some heavy equipment,” he said. But he quickly realized differently. We all looked at one another and I said, ‘I think this is an earthquake. I told everybody to get under the table.’ ” said Clough.

All the buildings at the Smithsonian were closed, including the landmark Castle building, where Clough was meeting. An initial survey “showed some cracks in beams and perhaps in some of the foundations,” Clough said. On Wednesday, the Smithsonian museums on the mall and the National Zoo reopened, although some exhibitions may be closed until curators are able to assess whether they sustained damage. The Castle and the Museum Support Center in Suitland, Md., remain closed to staff and the public today. Staff at these facilities should check  http://www.alerts.si.edu/ for updates.

Where were you when the earthquake struck? How was your commute? We want to hear your stories and see your photos. Leave comments and links below or visit us on Facebook to post your pictures. 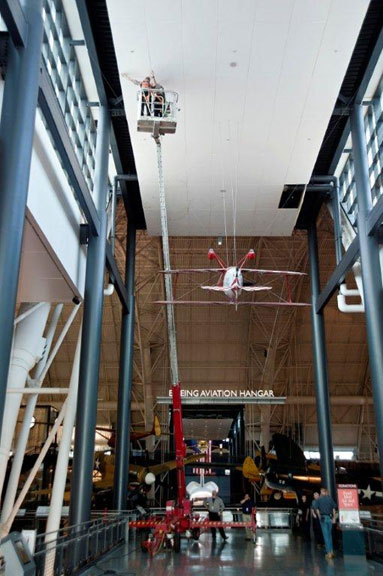 Today, I visited four Smithsonian facilities affected by Tuesday’s earthquake. Two of these facilities, the Castle Building and the Museum Support Center (MSC) sustained the most damage. Fortunately, no one was hurt, but the extent of the damage to these two facilities was greater than we initially expected. It is clear that considerable costs will be involved at a time when resources are already constrained.

Although we began to investigate the after-effects immediately, this process, involving so many structures, is time consuming. We have hired four engineering firms to assist our own capable staff to conduct expedited structural evaluations. Today we continued the assessment, walking through buildings room by room, stairwell by stairwell, trying to document every crack.

The Castle will remain closed to staff and the public on Thursday and Friday. The issues lie with the east side of the building (closest to the Arts and Industries Building) both internally and with the chimneys and decorative turrets on the roof. We are working with structural engineers to secure these structures so they will not sustain further damage during the weekend’s anticipated hurricane. We will assess options for opening the building during the next few days.

The MSC is safe for limited access and will open Thursday for collections assessment and facility clean up only. Staff who are not engaged in these activities should not report to work; employees at MSC will receive further instructions from the Natural History Museum this evening.

I am both proud of and grateful to our expert and dedicated staff who have worked tirelessly since the earthquake to assure the safety and security of our staff and visitors. I am also grateful to staff who continued our daily work–cleaning, cutting grass and caring for collections–to ensure our museums and the Zoo were ready to open on time this morning. Thanks to everyone’s remarkable efforts over the last 24 hours, we are almost back to business as usual.

Aug. 25 UPDATE: Read how animals at the National Zoo reacted to the earthquake.

Thank you to everyone who has assisted the Smithsonian’s efforts to recover from the earthquake earlier this week. Efforts to identify and repair the damage that was sustained are going well and we have not discovered any new significant problems. In addition, preparations are underway to ensure damage is not exacerbated by rain or wind from Hurricane Irene which may affect the Washington metropolitan area over the weekend.

All of our museums and the National Zoo are expected to remain open to the public. The Castle will remain closed to visitors and staff through Monday, Aug. 29.  Staff who work in the Castle should plan to work from alternate locations or telework on Friday, Aug. 26 and Monday, Aug. 29. An announcement about the Castle’s Tuesday status will be posted by the end of the day on Monday. 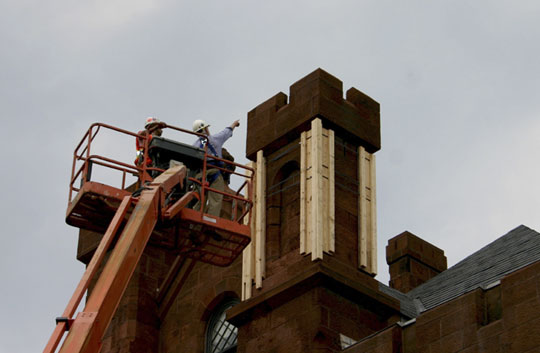 Smithsonian Secretary Wayne Clough, right, examines the Smithsonian Institution Building ("The Castle") in Washington, D.C. on Aug. 26, 2011. The Castle sustained localized damage in the east wing during the Aug. 23 earthquake. Six chimneys and decorative turrets on the roof were damaged when some of the mortar holding the stones was shaken loose during the earthquake, and some stones shifted in place. Crews are working to secure the structures with plywood and metal and nylon bands so they will not sustain further damage during this weekend's anticipated hurricane. The Castle remains closed to the public and staff through Monday, Aug. 29. All Smithsonian museums and the National Zoo are open. (Photo by John Gibbons)

The continued closure of the Castle will allow us to complete repairs now underway to stabilize turrets and chimneys that sustained damage in the quake, and to clean plaster debris from interior spaces. Structural engineering experts will advise and inspect these efforts and we are hopeful that we can reopen the building safely early next week.

The Museum Support Center (MSC) will be open on Friday, Aug. 26 and beyond to all employees, but access to some of the pods may be limited to collections recovery and facilities staff for an additional period of time. Office of Protection Services officers will be posted at the entrances to these pods to control access to these spaces.

Lastly, the Office of Human Resources will be issuing separate guidance that will provide instructions on how employee timecards should reflect any disruptions to work hours this week.

Thank you all for your assistance and support during this challenging time.

Under Secretary for Finance and Administration

After the shock: Secretary Clough gives an earthquake update

33 Responses to Where were you the day the earth moved?