The real purpose of leap day may be to keep the calendar aligned with the seasons, but at the National Zoo’s Panama Amphibian Rescue and Conservation Project the the day is a time to honor their favorite leapers. To celebrate, here’s some fun facts about frog leaping:

• Not all frogs can leap, or even hop. The desert rain frog (Breviceps macrops) has legs that are too short to hop. Instead, it walks.

• Male frogs of the genus Pipa are known to defend their territory by jumping at and then wrestling other males.

• The New Guinea bush frog (Asterophrys turpicola) takes jump attacks one step further: before it jumps at a strange frog, it inflates itself and shows off its blue tongue.

• Stumpffia tridactyla are normally slow-moving critters, but when they’re startled they can abruptly jump up to 8 inches. That doesn’t sound very far, but these little guys are less than half-an-inch long! 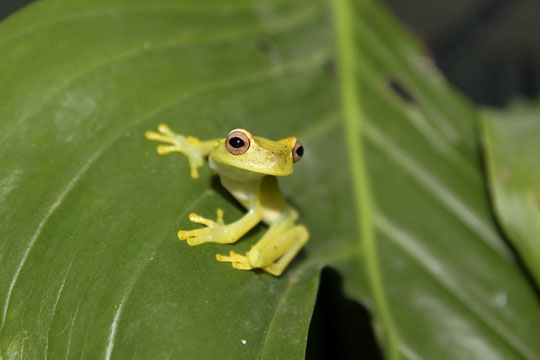 Although the La Loma tree frog, Hyloscirtus colymba, is notoriously difficult to care for in captivity, the rescue project is the first to successfully breed this species. (Photo by Brian Gratwick)

• The Fuji tree frog (Platymantis vitiensis) may be the leaping stuntman of the frog world. Each time it leaps, it twists in the air—sometimes even 180 degrees—to throw predators off its trail.

• The Larut torrent frog (Amolops larutensis) gets its name from a nifty leaping trick: it can jump into a fast-moving stream and back to its usual perch, the underside of a rock, without being affected by the current.

• The record for longest jump by an American bullfrog (Rana catesbeiana) recorded in a scientific paper is a little over 4 feet. But scientists who went to the Calaveras County Fair, which Mark Twain’s short story made famous for frog jumping, found that more than half the competitors bested that record—and one jumped more than 7 feet in one leap!

• The Guinness Book of World Records doesn’t include any frogs for their leaping ability. But it does track human performance in frog jumping (jumping while holding one’s toes).

In honor of leap day celebrations being coordinated globally by Amphibian Ark, the Panama Amphibian Rescue and Conservation Project made this video for a frog song written by Alex Culbreth.

What? You missed Panamanian Golden Frog Day? It’s not too late to start planning for next year.

Global trade in frog legs may be spreading deadly disease