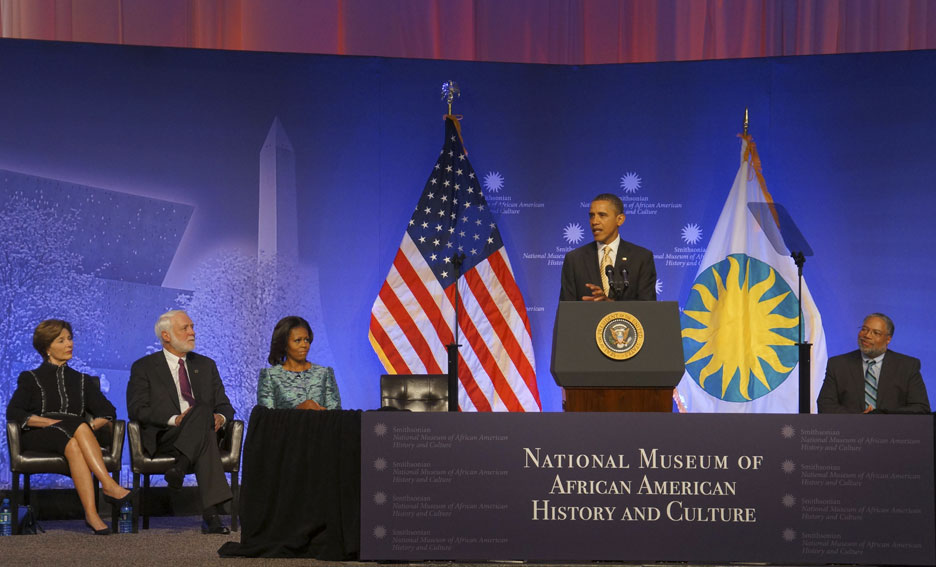 “I think about my daughters and I think about your children, the millions of visitors who will stand where we stand long after we’re gone,” said President Obama. “And I want them to appreciate this museum not just as a record of tragedy, but as a celebration of life. When future generations hear these songs of pain and progress and struggle and sacrifice, I hope they will not think of them as somehow separate from the larger American story. I want them to see it as central—an important part of our shared story.” 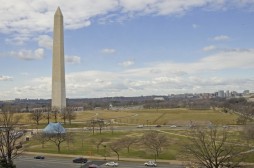 The museum site is directly across 14th St. from the National Museum of American History (to the east) and is northeast of the Washington Monument.

“With this groundbreaking we move closer toward creating a museum to make manifest the dreams of many generations,” said Lonnie G. Bunch III, founding director of the museum. “The structure about to rise on the National Mall will be a signature building, and the museum it houses will give us a way to ensure that America understands the African American experience as a history that has shaped us all.”

The National Museum of African American History and Culture was created in 2003 by an Act of Congress, establishing it as part of the Smithsonian Institution. The museum will be the nation’s largest and most comprehensive cultural destination devoted exclusively to showcasing African American life, art, history and culture.

The construction of the museum will begin in summer 2012 and is expected to take three years. FreelonAdjayeBond/SmithGroup was selected as the museum’s architectural and engineering firm in April 2009, and Clark/Smoot/Russell was selected as the construction firm in July 2011. The museum is expected to cost about $500 million, with half of the funds being raised by the museum and half of the funds provided by Congress. 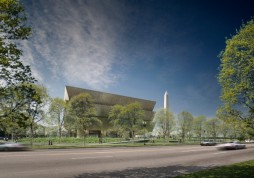 When it opens, the 380,000-square-foot museum will have a three-tiered bronze “Corona,” or crown. Other design elements have been chosen to mirror the faith, hope and resiliency of the African American spirit. The museum also will be designed to achieve Leadership in Energy and Environmental Design Gold certification. Sustainable elements in the museum will include solar hot water panels on the roof and a geothermal groundwater system.

The museum currently has about 25,000 objects in its collection, which cover the major periods in African American history, beginning with the origins in Africa and continuing through slavery, Reconstruction, the civil rights era, the Harlem Renaissance and into the 21st century. Some highlights of the collection are the Harriet Tubman collection, including her hymnal, lace shawl (given to her by Queen Victoria) and family photographs from her funeral; a Jim Crow railroad car (c. 1922); the Black Fashion Museum collection; a Tuskegee Airmen Boeing-Stearman PT-13D trainer plane and Congressional Gold Medal; and works of art by Charles Alston, John Biggers, Elizabeth Catlett, Jacob Lawrence and Lorna Simpson.

The museum’s inaugural exhibitions will focus on the broad themes of history, culture and community. These exhibitions (all titles are working titles) will include: 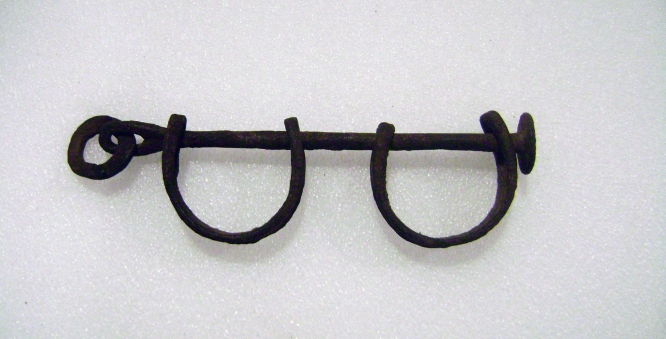 Middle Passage Shackles (wrought iron), c. pre-1863 Ankle shackles of the type used to restrain enslaved people aboard ships crossing the Atlantic from Africa to the Americas, during the Middle Passage.

The exhibitions are being designed by Ralph Appelbaum Associates in collaboration with the museum’s curators and historians. RAA has designed exhibitions for numerous museums, including the United States Holocaust Memorial Museum, the William J. Clinton Presidential Library and the Newseum.

Currently, the museum has its own gallery at the National Museum of American History. The museum’s current exhibition “Slavery at Jefferson’s Monticello: Paradox of Liberty,” opened to the public Jan. 27 and will be on view until Oct 14. This exhibition, presented in partnership with the Thomas Jefferson Foundation at Monticello, features artifacts from the Smithsonian’s collections and from excavations at Jefferson’s Virginia plantation. It provides a rare and detailed look at the lives of six slave families living at Monticello.

Michelle Obama adds her gown to an iconic collection

Why I love working at the National Museum of American History

On the ground in Haiti