Using a continent-spanning telescope, an international team of astronomers has peered to the edge of a black hole at the center of a distant galaxy. For the first time, they have measured the black hole’s “point of no return”—the closest distance that matter can approach before being irretrievably pulled into the black hole.

A black hole is a region in space where the pull of gravity is so strong that nothing, not even light, can escape. Its boundary is known as the event horizon.

“Once objects fall through the event horizon, they’re lost forever,” said lead author Shep Doeleman, assistant director at the MIT Haystack Observatory and research associate at the Harvard-Smithsonian Center for Astrophysics. “It’s an exit door from our universe. You walk through that door, you’re not coming back.”

“Even though this black hole is far away, it’s so big that its apparent size on the sky is about the same as the black hole at the center of the Milky Way,” says co-author Jonathan Weintroub of the CfA. “That makes it an ideal target for study.”

According to Einstein’s theory of general relativity, a black hole’s mass and spin determine how close material can orbit before becoming unstable and falling in toward the event horizon. The team was able to measure this innermost stable orbit and found that it’s only 5.5 times the size of the black hole’s event horizon. This size suggests that the accretion disk is spinning in the same direction as the black hole.

The observations were made by linking together radio telescopes in Hawaii, Arizona and California to create a virtual telescope called the Event Horizon Telescope, or EHT. The EHT is capable of seeing details 2,000 times finer than the Hubble Space Telescope.

The team plans to expand its telescope array, adding radio dishes in Chile, Europe, Mexico, Greenland, and the South Pole, in order to obtain even more detailed pictures of black holes in the future.

The work is being published in Science Express. 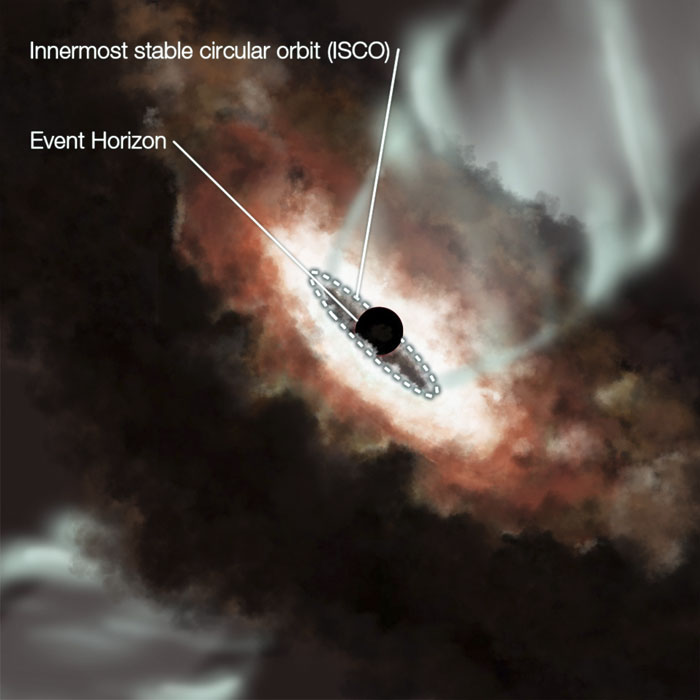 This artist’s conception shows the region immediately surrounding a supermassive black hole (the black spot near the center). The black hole is orbited by a thick disk of hot gas. The center of the disk glows white-hot, while the edge of the disk is shown in dark silhouette. Magnetic fields channel some material into a jet-like outflow – the greenish wisps that extend to upper right and lower left. A dotted line marks the innermost stable circular orbit, which is the closest distance that material can orbit before becoming unstable and plunging into the black hole. (Credit: Chris Fach, Perimeter Institute & University of Waterloo) 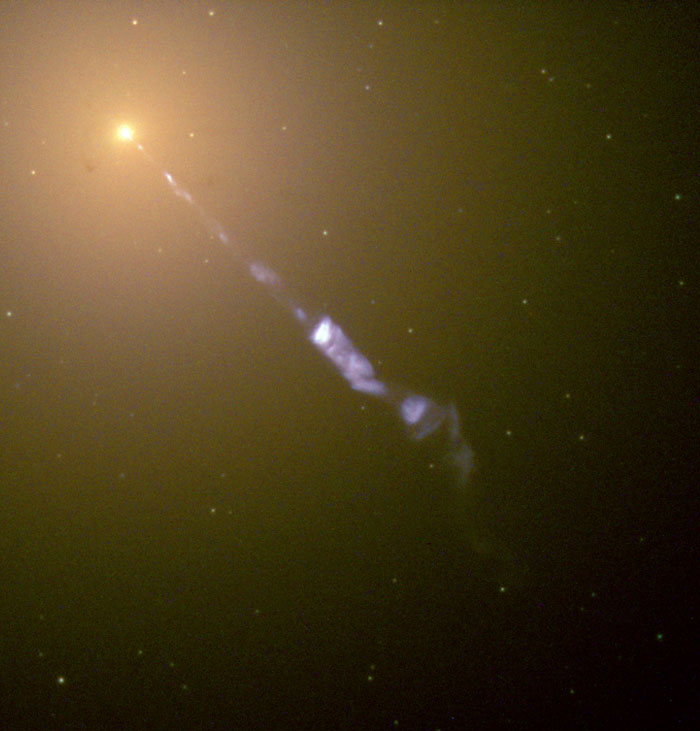 Streaming out from the center of the galaxy M87 like a cosmic searchlight is one of nature’s most amazing phenomena, a black-hole-powered jet of sub-atomic particles traveling at nearly the speed of light. In this Hubble Space Telescope image, the blue of the jet contrasts with the yellow glow from the combined light of billions of unseen stars and the yellow, point-like globular clusters that make up this galaxy.  (Credit: NASA and the Hubble Heritage Team)

The ghosts of gamma rays reveal our galactic past

About the Author: Christine Pulliam

Science writer Christine Pulliam is a former public affairs specialist for the Harvard-Smithsonian Center for Astrophysics, a joint collaboration between the Smithsonian Astrophysical Observatory and Harvard College Observatory located in Cambridge, Mass.