On most days, Rusty Russell, collections manager for the U.S. National Herbarium located in the National Museum of Natural History, Russell is surrounded by the quiet of the Herbarium and many shelves of dried plant specimens that record centuries of expeditions around the world. In his 30-plus years working for the Department of Botany, Russell has brought order and innovation to these collections – creating a bar coding system, scanning specimens into a digital library and placing botanists’ field books online, including those of Edmund Jaeger (1887-1883) who amassed extensive plant collections from the deserts of California.

“The only single unambiguous personal record of a scientist’s research is in his field book. They can contain stories of life and death that are fascinating,” said Russell. 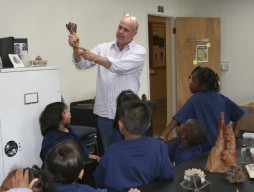 For the past eight years, Russell has been bringing his own encyclopedic knowledge of plants to the Riverside Metropolitan Museum in Riverside, Calif., creating citizen science programs that take residents into the field and help them build their own collections of indigenous plants.

“Our citizen science weeks came about in an interesting way,” said James Bryant, RMM curator and a former student of Russell’s. “I discovered some specimens in our collections that had been collected by Edmund Jaeger, who also collected for the Smithsonian. When I contacted Rusty, he pulled the NMNH specimens and we started talking about the history of the mountains in this area and how they have been affected by climate change.”

The challenge of exploring an area that had not been studied for 70 years intrigued both men and soon, Russell was leading a team to explore the Santa Rosa–San Jacinto mountain slopes that Jaeger had once hiked. This initial field trip grew into a larger program that brings California residents into the field to make their own observations and field notes. Every spring, Russell travels back to Riverside to lead a week-long citizen science program.

In one program, the week focused on wildflowers and how floral areas transition to the nearby desert. Activities included short hikes, pressed- flower workshops and lectures, all designed to increase citizen awareness and appreciation of the region’s environments.

“Rusty’s prominence in the field and our relationship with the Smithsonian contributed to Riverside receiving the grant,” said Bryant. “Citizen Science Week has been a catalyst for many spinoffs.” 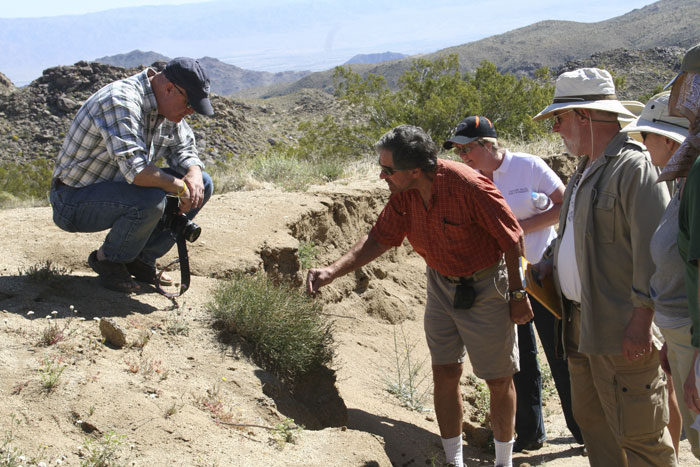 In the field. (Photo by Danielle Leland)

These spinoffs include an invitation for Bryant and Russell to speak at a May conference at the California Academy of Sciences, which is exploring how to create a statewide citizen science program. The University of California, Riverside provides scholars and experts to serve as the research arm of the citizen science efforts, while nearby Redlands-based company ESRI has worked with RMM to create a geographic information system software for digital field notes, which is used by a wide network of volunteers who document plant changes and responses to climate change.

“Our citizen scientists use this to collect and provide this data to scientists like Rusty,” said Bryant. “It’s sparked a revival of interest in this area.”

Both Russell and Bryant agree that RMM’s active relationship with the Smithsonian has benefits for both institutions. “Riverside is also helping the Smithsonian,” said Bryant. “We have helped the Smithsonian establish a presence in our community, and as a result we are providing the Institution new research data, programs and new members.”

“The nice thing about this project is that it brings smaller places together with the Smithsonian,” said Russell. “Many people may not have the opportunity to go to Washington, D.C., but through this kind of outreach, the Smithsonian plays an ongoing role in this community.”

Smithsonian scientists look at climate change from a global persepective

About the Author: Cara Seitcheck

Cara Seitchek is a Washington, D.C.–based freelance writer and editor, specializing in museums, finance and science. She teaches writing classes for UCLA Extension and the Writer’s Center in Bethesda, Md., and has a Master’s degree in writing from Johns Hopkins University.