In Part II of the Secretary’s travel journal, a visit to the highest peak in Hawaii takes us a little closer to the stars themselves. Click here to read Part I.

Our visit to the peak of Mauna Kea on the Big Island of Hawaii to see the Smithsonian Submillimeter Array will take all day. Johnny and I are joined by Roger Brissenden, deputy director of SAO, as we board the plane in Honolulu.  Our destination, Hilo, is a hospitable city of about 30,000 people who have learned to live with upwards of 200 inches of annual rainfall. If you need to dry out, just drive up the road to Mauna Kea where the higher elevations rise above the clouds and the precipitation, and the climate near the peak is desert-like.

On cue, it is raining at the Hilo airport, sweeping in from the ocean and falling in veils that dance like wind-blown curtains. The Director of SAO’s Submillimeter Array, Ray Blundell, has arranged for us to be taken to SMA’s Hilo facility where instruments are built, computer processing is done and there are offices for the scientists and support staff. The building is located on what might be termed Astronomer’s Row, a neighborhood owned and maintained by the University of Hawaii that houses the different organizations maintaining telescopes on Mauna Kea. SMA headquarters is housed in a low building that blends gracefully into the foliage surrounding it and won an award for its architecture when it was completed in 2003. We are greeted by staff who give each of us a lei made from the nuts of the Kukui tree, the state tree of Hawaii that has been planted here to provide shade for the building. We spend about an hour at the headquarters, touring the labs and meeting with staff. It is a great opportunity to bring our colleagues up to date on the Smithsonian back on the mainland. 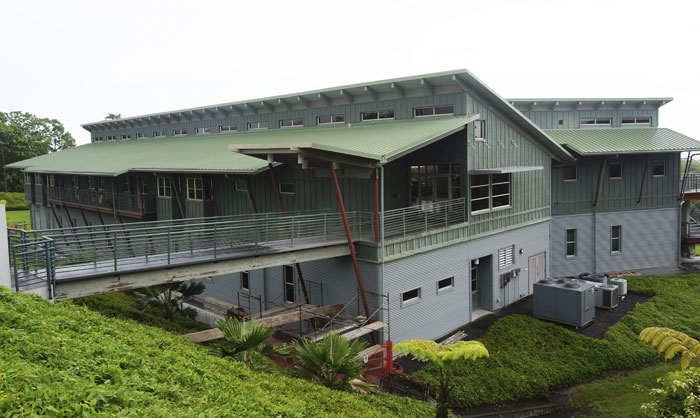 Headquarters for the Submillimeter Array in Hilo, Hawaii. (Photo by John Gibbons)

Our drive up the mountain will take us from sea level to 13,500 feet elevation. On the way we pass through 10 different climate zones. Very quickly, the foliage begins to change from lush tropicals to leaner and more stunted brush and shrubs. At about 6,000 feet we break through the clouds and leave the rain behind. Now in sunshine, the vegetation consists mainly of grasses and sage, the brown expanse broken by the bright colors of phlox-like ground covers and wild flowers. Massive black and gray lava flows line one, and sometimes both, sides of the road—mute reminders of the violent geologic past of Mauna Kea. 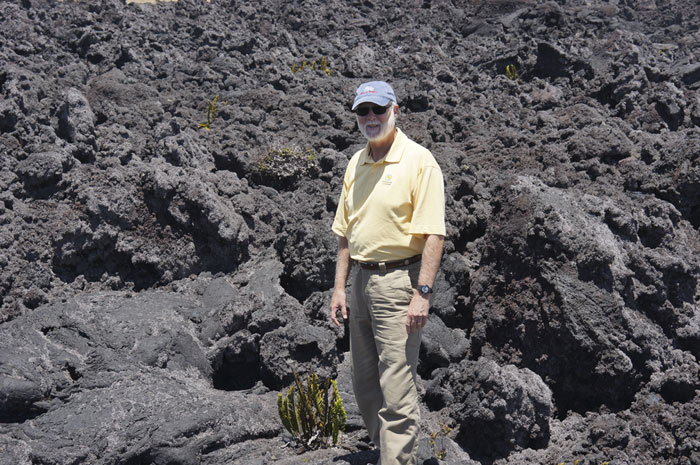 Lava flows on the slopes of Mauna Kea. (Photo by John Gibbons)

We turn off the main road to ride along a saddle ridge that takes us up a steeper slope to reach “HP” (Hale Pohaku, which means house of stone), the base camp for those working at the peak. At 9,500 feet, HP is a convenient location to stop for lunch and give our bodies a little time to acclimate to the altitude. Looking back down our route, the clouds covering Hilo form a plateau to the north as they snuggle against the slope of Mauna Kea, while to the south the road continues on down toward the leeward and dry side of the island. 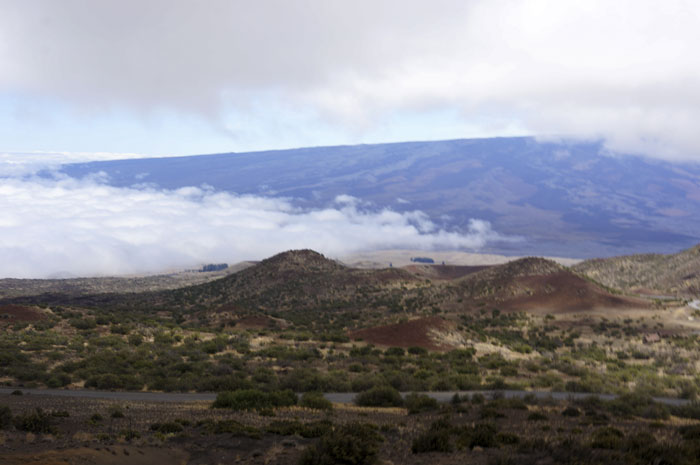 Above the rain clouds. (Photo by John Gibbons)

The final push to the peak begins by downshifting into four-wheel drive for the unpaved road. On the way we conduct a serious science experiment involving a bag of potato chips. At lunch, we noticed the chip bags—sealed under sea-level air pressure—were puffed up like balloons as the air pressure inside the bags exceeded the air pressure outside. The burning scientific question is: Will the bag pop on the way up and if so, at what elevation?  Experienced hands among the crew say it will pop, but there is some difference of opinion as to the elevation. My job is to hold the bag upright and clear from my body so Johnny can videotape the big moment. Roger has an app on his phone that can track the elevation and so we advance with our team in place and the bag drawing ever tighter with the growing pressure differential. It dawns on me that I may have drawn the short straw here since I am holding an object that could explode, sending its contents flying into space—a space I occupy. The tension grows and precisely at 11,000 feet, the bag gives up—not with an explosion, but with a disappointing wheeze. A split had developed in the seal at the unwatched bottom of the bag. While we feel gratified that there is an outcome, we are a little disappointed that our “Big Bang” theory did not have a more dramatic resolution. 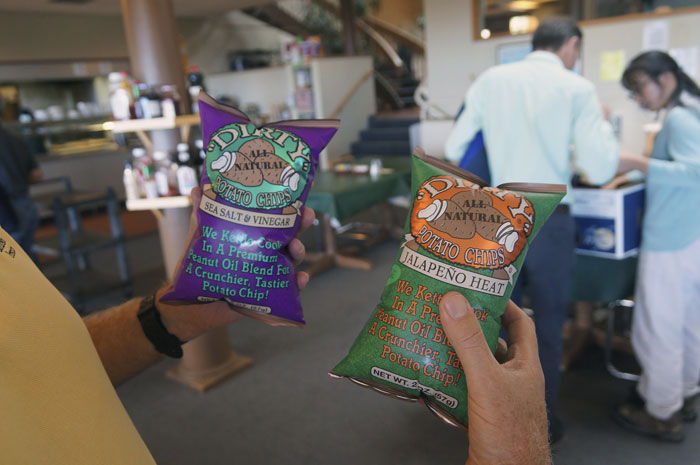 The experiment has distracted us from the fact that we are reaching elevations with thin oxygen and low pressure that our bodies do not normally experience. We stop to take pictures at the sign marking 13,000 feet and the simple act of walking a few feet back and forth to the car lets you know just what that means. Even mild exertion causes labored breathing and lightheadedness. Fortunately, the peak of the mountain is just around the bend. It is a breathtaking sight as the great telescopes come into view, each occupying a spot selected for its view of the heavens. Some of the telescopes are cylindrical and others rounded or domed in the manner of a classical observatory. Perhaps the most well known are the twin Keck optical telescopes, each housing a mirror 10 meters in diameter. They were built in the early 1990s and have been key in major astronomical discoveries. 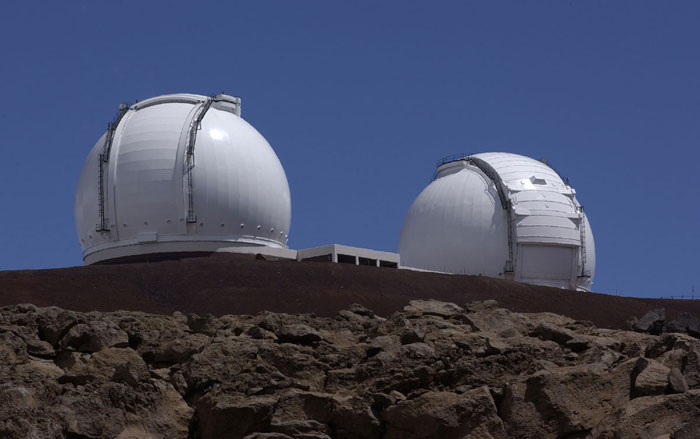 Relying on a different technology and with a different mission, the Submillimeter Array is designed to detect light that is not visible to the human eye. By detecting millimeter and submillimeter radiation, the SMA can measure quantities of gas and dust and see events like the death and formation of stars in regions that optical telescopes cannot reach. The SMA is a joint venture between the Smithsonian and Academia Sinica Institute of Astronomy and Astrophysics of Taiwan and consists of eight 6-m-diameter antennas. There are 24 antenna pads that allow the antennas to be reconfigured to obtain different angular resolution on the sky as needed to facilitate observations in different parts of the sky. Each antenna is mounted on a bearing system that allows it to rotate and move during observations to track stars and other objects. 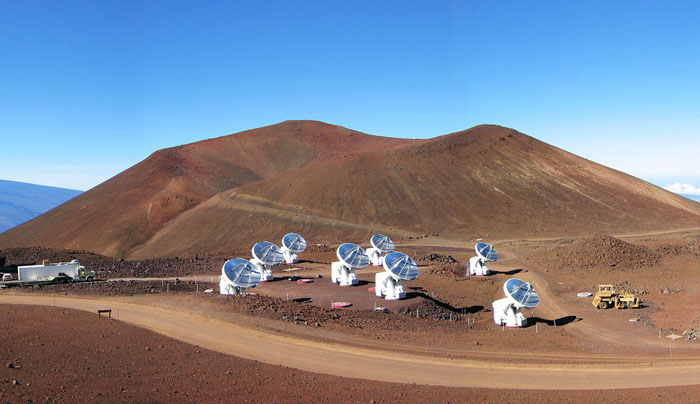 We are escorted to the control room, which is oxygenated to allow the operators to breathe freely. For lowlanders who are not used to the altitude, it is a welcome respite to catch our breath. The telescope operations crew describes how the telescopes work and to illustrate the remarkable flexibility of the antenna field, I am given the opportunity to push a button that activates a redirection of the antennas. On cue, the antennas respond immediately and rotate in unison to a new position with military precision.

My work done in the control room, we proceed outside for a close-up view of the antenna field, first bundling up in parkas to shield us from the cool temperature and the brisk winds. I climb a ladder on one of the antenna up to a small platform where the controls are housed. Within is a wonder of electronics, all encased in vertical aluminum trays that can be removed for updating and repair. To make the case that the antenna are mobile, a call is made to move further demonstrate their mobility, the control room programs another relocation and I go along for the ride as the antennae rotates smoothly into its new position. These remarkable machines were designed and built by SAO engineers and scientists back in Cambridge, Mass., shipped to Hawaii and reassembled on site. 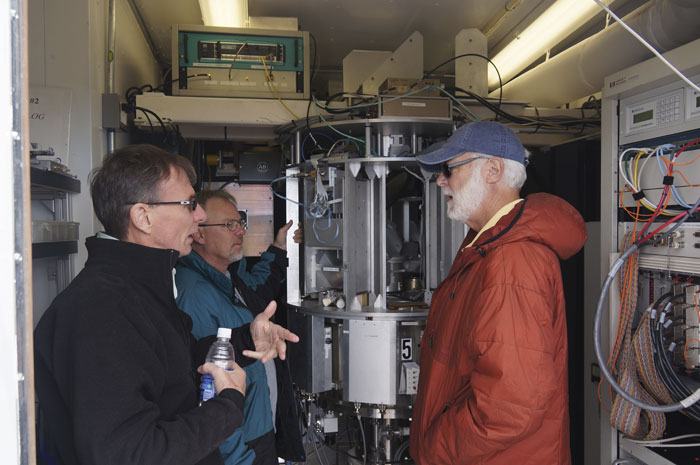 Inside the control room (Photo by John Gibbons)

We return to the control room and learn more from one of the astronomers as he presents a compilation of findings made using the SMA.  Particularly interesting is the early stages of the formation of a new star and its solar system. Beginning as a whirling disk of gas and dust around a gravitational center, the images show that planets are beginning to emerge, sweeping out their orbits from the disk of gas. Although I have to confess that some of this science is over my head, I find the parts I understand fascinating. And what is even more exciting is how much more we have yet to learn. 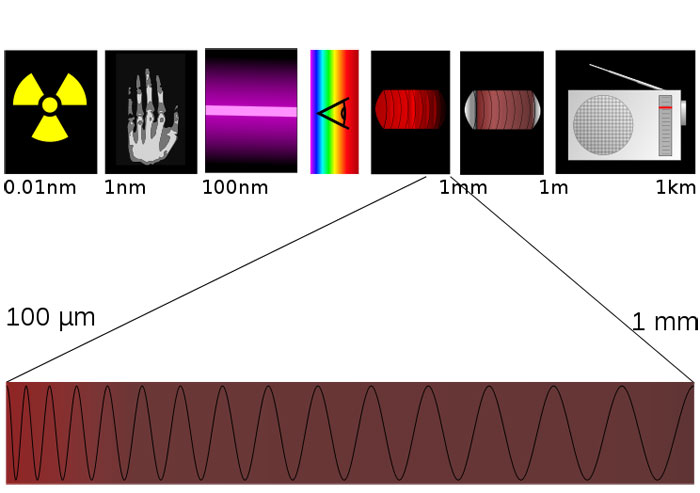 Submillimeter radiation (or terahertz waves) lie at the far end of the infrared band, just before the start of the microwave band. Image via Wikipedia Commons.

Time arrives for us to depart, but I do so with a tinge of regret because what I have seen has been eye-opening and inspirational. On our way out, we take a detour up the road to see the Keck Telescopes that loom over the SMA. Visitors are welcome for an informative self-guided tour.  I am surprised to meet a couple of tourists, who apparently drove up the mountain just to have a look around. I am sure they found their detour rewarding!

As we wind our way down, we make one stop just below the peak to see one of Hawaii’s most endangered plant species, the Haleakalā Silversword (Argyroxiphium sandwicense subsp. macrocephalum). This remarkable plant lives only in desert conditions at the highest elevations—an ecosystem suited only for the hardiest of species. The plant is surrounded by a low fence to keep feral goats from eating it, standing unto itself on a baked, rocky slope in lonely solitude. Its coloration is unique and seems to me to be a dusty, but striking silver, standing out on this barren hillside. It has radiated green shoots laden with seed pods as it prepares to offer another generation a chance to succeed. 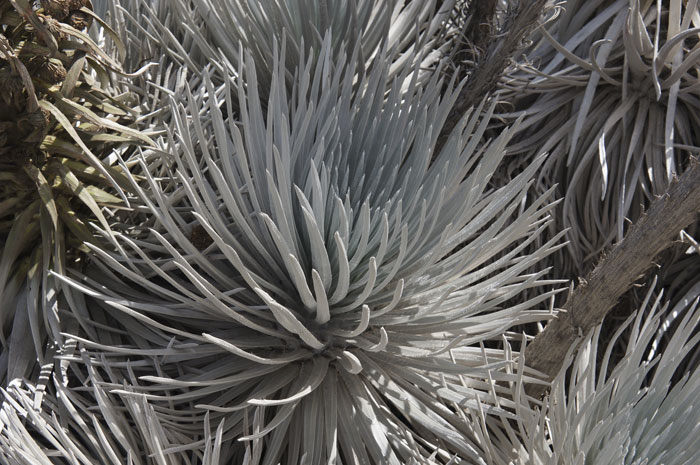 Our route takes us back the way we came and soon we are passing from sunlight into the layer of clouds we left in the morning. We drive down into the intermittent rain of Hilo and to the airport where we catch our plane back to Oahu. As we fly over Maui, the waning sun lights a promontory on the volcano Haleakalaa mountaintop and Roger points out the Pan-STARRS Telescope, in which SAO is a major partner. This telescope has remarkable ocular powers and is designed to detect moving objects like asteroids and comets hurtling toward earth. Fortunately, one is not heading our way at the moment.

Next: Coral reefs and cryogenics.

On the road in Arizona: The Secretary’s travel journal

One Response to On the road in Hawaii II: The Secretary’s travel journal