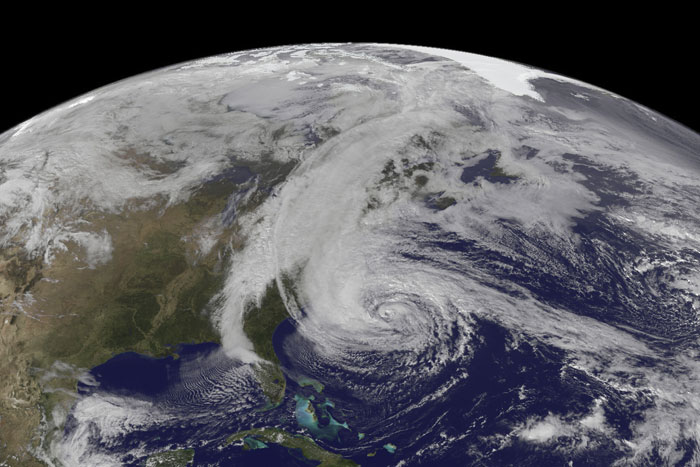 As hunter-gatherers and farmers, from the industrial age to the information age, humans have shared a symbiotic relationship with the Earth. Never before, however, have we been able to so profoundly change the world around us, creating vast amounts of waste, depleting finite resources, altering biodiversity, and even changing the chemical composition of our atmosphere and oceans. This unprecedented global change has caused some to label this a new geological epoch: the Age of Humans or the Anthropocene. We will have to make major long-term decisions based on the consequences of this global change. The Smithsonian can help put these changes into context, not just from the perspective of our scientists, but from a historical, cultural and even artistic perspective. As David Shayt, the late, beloved curator from the National Museum of American History once noted, “there is an accurate perception that we are forever,” and as such, the Smithsonian should forever be a bigger part of the discussion.

Many organizations, ranging from the National Oceanic and Atmospheric Administration to NASA, research areas of global change. The Smithsonian stands alone, however, in our ability to approach it from multiple angles, from fields as disparate as paleobiology, anthropology and botany. The National Zoo’s Suzan Murray is exploring how zoonotic diseases—those transmitted from animals to humans—flourish under rising temperatures. Marine ecologist Mary Hagedorn and her team, using innovative cryopreservation techniques, conserve coral that is threatened by warmer temperatures and ocean acidification. Scientists from the Smithsonian Arctic Studies Center are exploring the history of arctic climate change and its impact on the land, sea ice and contemporary peoples of the region. The Smithsonian can also look back hundreds of thousands of years, as Rick Potts’s team did in obtaining core samples from lake sediment in Kenya, to investigate how the environment might have played a role in the origins of Homo sapiens.

But if we are to do more to comprehensively address global change, we must collaborate more closely. The Smithsonian Institution Global Earth Observatories  do just that, as our Tropical Research Institute in Panama, the Conservation Biology Institute in Virginia and the Environmental Research Center in Maryland, along with partners around the world provide real-time, detailed data on how climate change is affecting forest biomass, how carbon sequestration in forests varies with latitude, and how a forest’s biodiversity changes over time and distance. Two big initiatives on the horizon will further widen the lens through which the Smithsonian looks at the effects of humans on the planet—the Smithsonian Astrophysical Observatory project Tropospheric Emissions: Monitoring of Pollution and the Tennenbaum Marine Observatories. 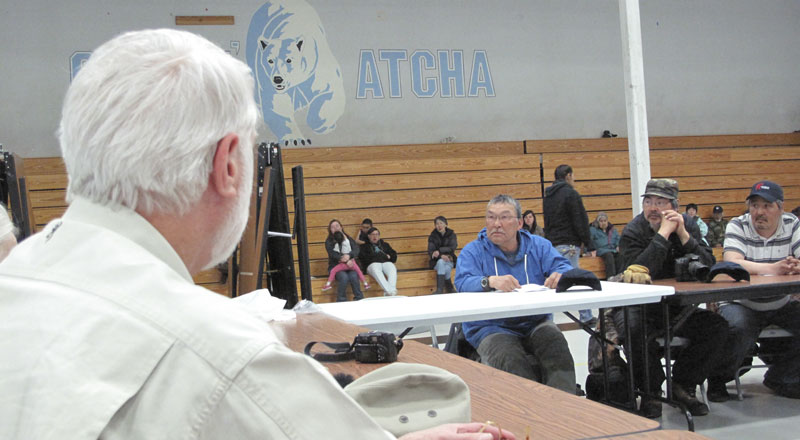 Wayne Clough listens attentively as members of the Gambell community on St. Lawrence Island between Alaska and Siberia describe how climate change is affecting their traditional culture. May, 2010.

Led by SAO scientists, TEMPO will be the first space-based instrument to hourly monitor air pollutants across North America during the daytime, providing clues to the relationship between air pollution and climate change. The Tennenbaum Marine Observatories will monitor the ocean’s coastal ecosystems to study environmental change on the world’s coasts. We already do a wide array of research into the costs of human-driven change to our oceans, from acidification to the effects of warming waters on marine life to the impact of invasive species. This initiative will allow us to put it all together and work in a more integrated way.

Several events led me to believe that we should, as an Institution, begin to integrate our approach to communicating about human-driven global change. Before I started at the Smithsonian, I was thinking about the global challenges posed by human activity, especially after I had the opportunity to work on the Committee on New Orleans Regional Hurricane Protection Projects after Hurricane Katrina.

Hurricane Katrina illustrated how vulnerable anyone living near a coast is—a current worldwide population of more than 5 billion people. When designing levees to prevent flooding or buildings to withstand hurricane winds, engineers look ahead 100 years or more, and they must take rapidly rising sea levels into account. Ultimately, the reconstruction costs of the hurricane prevention system in Louisiana were more than 14 billion dollars. But many deplored that expense and suggested these risks are the price of living below sea level in New Orleans. Recently I visited the Yupik people, subsistence hunters from St. Lawrence Island between Alaska and Russia. There I heard the elders relate the hardships they are enduring due to rising temperatures and how their way of life is threatened. Again, some dismissed this as the misfortune of a small society of people with little global significance. It was only when Hurricane Sandy struck so violently and widely along the east coast many in the general population began to change their thinking about such natural disasters. Although no particular hurricane or violent storm can be directly connected to climate change, the evidence strongly predicts more frequent intense hurricanes with substantially higher rainfall rates, increased melting of arctic ice, higher sea levels and dwindling food sources. The plight of the Yupik, the hardships faced by the residents of New Orleans, the devastation seen in New York and New Jersey make it clear that we are all in this together. We must all devise work together to devise solutions to mitigate and adapt to these changes.

In October, the Smithsonian’s Grand Challenges Consortia presented the symposium The Anthropocene: Planet Earth in the Age of Humans, a comprehensive look at the ways in which we have changed our world. Since the Smithsonian first opened its doors in 1846, this Institution has used its multidisciplinary expertise to be a trusted source of knowledge for learners of all ages. Now it is time to add our voices, more loudly, more forcefully and more comprehensively, to the chorus of authorities weighing in on the global changes which will drive decisions for generations. David Shayt was looking for objects in New Orleans after Katrina when he came across a toy castle buried in the muck. It seemed a perfect item to add to our collection because of our own iconic Smithsonian Castle, but David noted the sad irony that the ruined castle also “spoke volumes about our expectation that houses are supposed to last.”

I welcome all of your input in the coming weeks and months as we look to create new educational materials and a web presence as part of a lasting, singular Smithsonian voice that will speak to the global changes that affect us all. 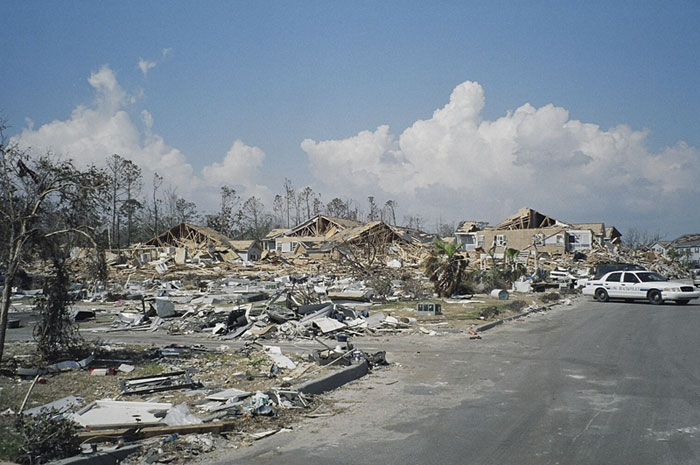 The aftermath of Hurricane Katrina, August 2005. (Image via Newshawker.com)

Collecting history in the aftermath of Katrina