Home News & Announcements From the Secretary Smithsonian music: Here for all to Hear 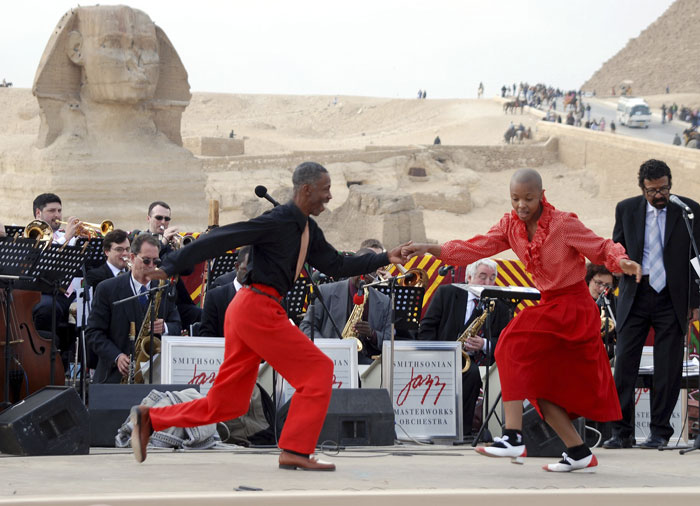 Swing dancers at the “Jazz on the Nile” performance of the Smithsonian Jazz Masterworks Orchestra in Cairo, Egypt, Feb 15, 2008.

Last year, Kenneth Slowik, curator of musical instruments for the National Museum of American History and artistic director of the Smithsonian Chamber Music Society, was named the Secretary’s Distinguished Lecturer. In addition to displaying his scholarship and his remarkable ability to conduct and to play harpsichord, viola da gamba, and cello, he related what it was like to work as a young performer in the fields of popular and commercial music. Years ago, for example, Ken accompanied R&B star Isaac Hayes in concert. But the gig wasn’t as glamorous as it sounds. He and three other string players were suspended from the ceiling in a cage for three hours out of the audience’s sight, lowered for their single musical number, and then whisked back up into the rafters for the remainder of the concert.

Here at the Smithsonian, Ken and fellow music scholars and performers are working on a new initiative to bring music at the Smithsonian into the spotlight. We have a unique musical legacy: our extensive collections of instruments and recordings, scholarly research into the history and culture of music, archival material and live concerts featuring music ranging from Haydn to hip-hop. It is time to sing the praises of Smithsonian’s rich legacy in music—so all Americans can enjoy it.

If you’re going to sing its praises, you need to hear the music! The Smithsonian offers a wide selection of live performances throughout the year. Classical music winds its way through the Institution courtesy of the Smithsonian Chamber Music Society, now in its 36th season, with the world-class ensembles the Axelrod String Quartet and the Smithsonian Chamber Players. The Smithsonian American Art Museum’s contemporary music ensemble-in-residence, 21st Century Consort, plays pieces inspired by artworks from the museum’s exhibitions and permanent collection. The Freer/Sackler Gallery’s concert series, available via podcast, represents the wide range of musical styles from Asia. Jazz takes center stage at the Institution as well. The Smithsonian Jazz Masterworks Orchestra, founded in 1990 by a Congressional appropriation, practices “cultural diplomacy” by taking this uniquely American art form abroad to places as far flung as Egypt,  Russia and Ethiopia. New SJMO artistic director and conductor Charlie Young will lead a program on Feb. 23 featuring the music of New Orleans’ pioneering soprano sax player Sidney Bechet, and April kicks off the 12th annual national and international Jazz Appreciation Month, founded by NMAH and celebrated in all 50 states and in 40 countries. Even our four-legged friends like to get in on the live music act; one of our biggest musical stars is Shanthi, an 8,900-pound Asian elephant at the National Zoo who plays a mean harmonica.

When jazz icon Lionel Hampton donated one of his vibraphones to NMAH, he summed  up by noting, “When you get into the Smithsonian you are the best. There’s nothing better.” Our vast musical instrument collections span a diverse cross-section of eras, cultures and regions: electric guitars from Prince and Eddie Van Halen and Dizzy Gillespie’s trumpet at NMAH; 5th-century Chinese bronze bells at Freer/Sackler; traditional African musical instruments at the National Museum of African Art; a 1930s- era drum of wood, bark and iguana skin found at the National Museum of the American Indian; an ancient Hindu war horn at the National Museum of Natural History. In all, more than 16,000 musical instruments inhabit the Smithsonian, one of the largest collections in the world. An impressive array of other music holdings—from a hundred thousand pages of musical notation to technological advances that helped turn those notes into recordings—tells the stories of centuries of musical expression. But without our expert music curators, scholars and educators, these stories would go untold. 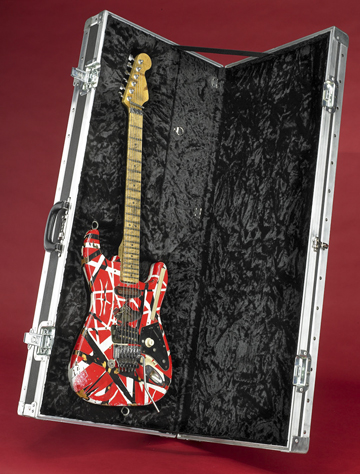 Smithsonian researchers delve deeply into our historical musical collections, often using technology to glean new insights. From optically scanning early wax cylinder audio recordings so they can be played without damaging them, to digitally imaging Stradivarius violins to quantify their distinctive rich tone, our music scholars do compelling research. They also present educational seminars and programs such as those produced by Smithsonian Associates, including an upcoming exploration of jazz giant Louis Armstrong’s legacy by founder of the Smithsonian Jazz Masterworks Orchestra and curator of American music at NMAH, John Edward Hasse.

In this time of dwindling resources dedicated to school music programs, the Smithsonian has a real opportunity to help fill the gap with our activities, research and resources. One program for libraries and educators, the Smithsonian Global Sound for Libraries, is helping learners of all ages tap their full potential through the power of music. This comprehensive streaming audio collection provides access to over 42,000 tracks from the Smithsonian archives including world music, songs that explore American history and an extensive collection of children’s music. Much of this content comes from the archives of Smithsonian Folkways, our nonprofit record label dedicated to celebrating the heritage of music from cultures throughout the world. This traditional music repository is using technology to expand its reach globally, as the Folkways iTunes collection can now be purchased in 63 countries, from Argentina to Vietnam. Their efforts are paying dividends, as a record five Smithsonian Folkways recordings were nominated for this year’s GRAMMY awards.

Bringing it all together

Recognizing that creating a voice that speaks to the collective impact of our music holdings would enhance our reputation as a great musical resource, the Smithsonian Consortia funded the Grand Challenge project, “Creating a Roadmap for the Future of Music at the Smithsonian.” In June, this Smithsonian Music Group, led by principal investigator Kennith Kimery, executive producer of SJMO, convened Smithsonian leaders and external “thought leaders” to help make the Smithsonian a one-stop music access point for people anywhere. We want people to think of the Smithsonian when they think of music, so they can be transported to different countries, different times and different cultures, to experience the full scope of human musical achievement.

The annual Folklife Festival on the National Mall proves the uniting power of music. Last year, the National Museum of African American History and Culture’s “Bring Back the Funk” concert with headliner George Clinton brought back the funk and brought down the house for thousands of music lovers, including me. It was a treat to show Mr. Clinton some of the artifacts around my office and to obtain his autograph, which includes his distinctive caricature of a hound dog. It is fitting that his famed stage prop, “The Mothership,” will hold a prominent place in NMAAHC, alongside other artifacts that celebrate the indelible contributions by African Americans to the nation’s musical legacy. The Smithsonian Music Group will help us bring that legacy, and all of our musical resources, out of the shadows for good. And that will be music to our ears. 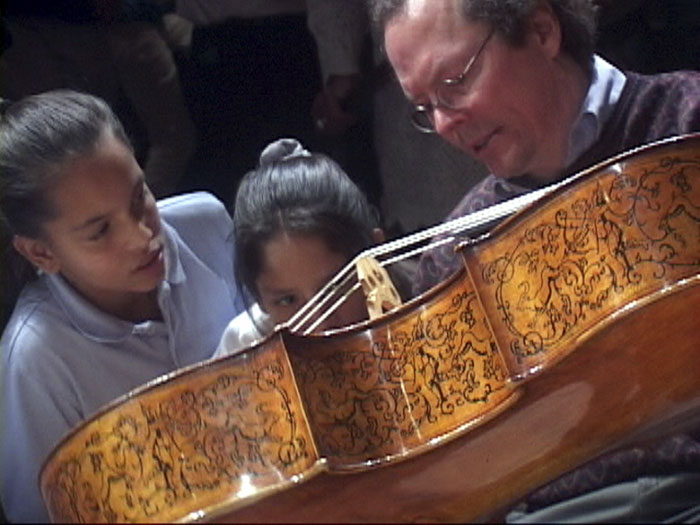 Kenneth Slowik shares the unparalleled craftsmanship and elegance of one of the Smithsonian’s Stradivarius cellos with students from Santa Fe, New Mexico.

Sex and the city songbird: Can you hear me now?

2 Responses to Smithsonian music: Here for all to Hear