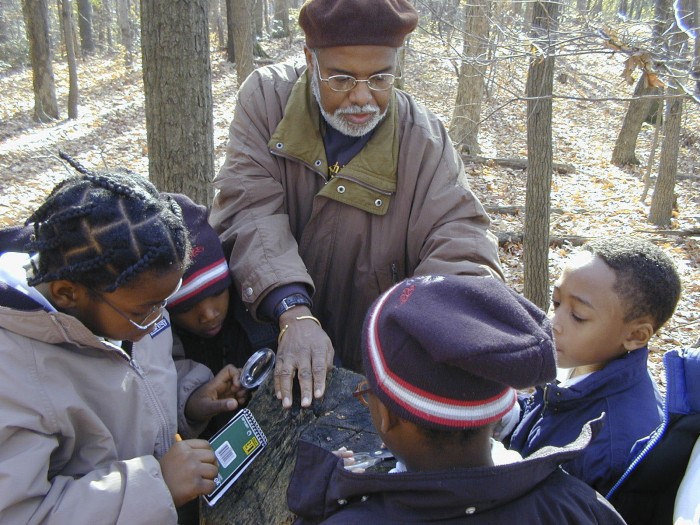 Fifth graders from Our Lady of Perpetual Help School, Washington, D.C., walk the Dr. George Washington Carver Nature Trail at the Anacostia Community Museum with Dr. Jawara Kasimu-Graham. He shows them how to use a magnifying glass to count the rings of a tree to tell its age.

Venture to the many galleries, museums, libraries and research centers throughout the Smithsonian and you will realize the key role volunteers play in our work. People of all ages and backgrounds give of their time, passion, and expertise every day, in many cases for years. In April, our annual Volunteer Appreciation Month will celebrate the myriad contributions of more than 6,200 volunteers who worked more than 449,000 hours at the Smithsonian last year. We simply could not do what we do without the docents who give tours, the people who work behind the scenes, the friendly faces our visitors see at the information desks, folks at the Zoo who wake up at daybreak to care for and feed our wonderful animals, the citizen scientists who add to our body of knowledge—and that has been the case since the Smithsonian first appeared on the National Mall.

The United States is so deeply rooted in volunteerism that it began before our independence. In 1736, Benjamin Franklin started the first all-volunteer firefighting brigade in Philadelphia, the Union Fire Company. Years later, Alexis de Tocqueville noted, “I have often seen Americans making great and real sacrifices for the public welfare; and I have noticed a hundred instances in which they hardly ever failed to lend faithful support to one another.” That spirit was not lost on the Smithsonian’s first Secretary, Joseph Henry. When he established a network of volunteer weather observers that stretched from Canada to the Caribbean, he not only set the stage for the National Weather Service by creating the first daily national weather map, he set in stone the integral role that volunteers continue to play in the Smithsonian’s success. 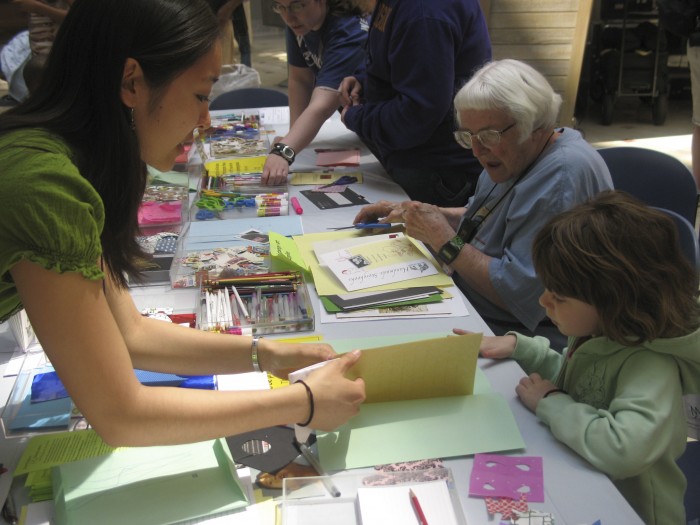 A volunteer shows a child how to make a storybook letter at an Asian Pacific American Heritage Month program at the National Postal Museum.

From more interactive technology like mobile apps and social media, to more inviting spaces like the Great Hall in the Castle, the Smithsonian is changing into a more dynamic and engaging place for visitors. That change is happening for our volunteers as well, which is evident in the pilot Visitor Concierge program at the National Museum of Natural History. Instead of waiting behind a desk for people to ask questions of them, these volunteers actively engage visitors throughout the museum, offering them guidance, giving them tips on planning their activities, and enhancing their museum experiences. By applying what these volunteers learn, we hope to replicate the program in other units. I can personally vouch for the value of active engagement, as I often get into the spirit of volunteering myself by offering to help visitors who look like they need assistance. When they ask me what I do here, I proudly tell them that I am an honorary volunteer.

Technology is also expanding opportunities for volunteers. Recently, the Archives of American Art and Smithsonian American Art Museum held a volunteer “edit-a-thon” to increase the representation of women artists on Wikipedia. Volunteers for the National Postal Museum help build the value of the Arago website by adding metadata to the images in the search engine. And throughout the Smithsonian, scanning collections and digitally curating exhibits is an increasingly common task for our volunteers. 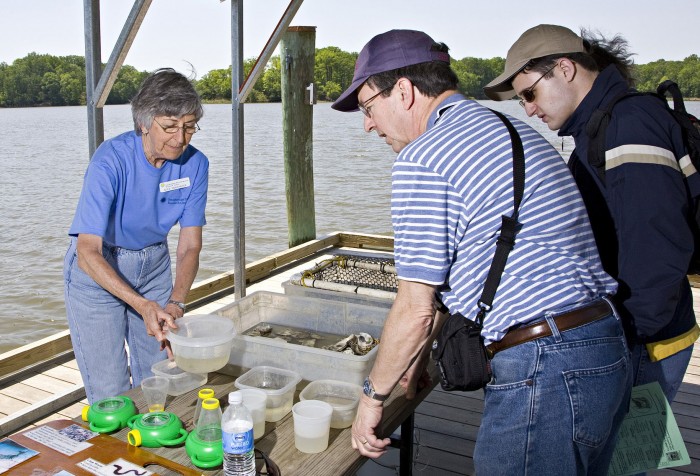 A volunteer at the Smithsonian Environmental Research Center explains how oysters in the Chesapeake Bay are affected by water quality.

I am heartened to see people of all ages around the Smithsonian who are imbued with the spirit of service. Young people work as Class Aides during the Summer Safari Day Camp at the National Zoo, assisting FONZ teachers. People 16 and up staff the National Air and Space Museum’s Discovery Stations—portable kiosks that engage visitors with hands-on demonstrations about aviation’s history and principles of flight, the exploration of space, astronomy and planetary geology. And coming soon, the National Museum of Natural History will open its new education center, Q?RIUS. Youth volunteers will guide museum visitors new to the center and help excite the learning in visitors of all ages.

I have been fortunate to have lunch with some of the volunteers who give years of their lives to us. Two of them, Fanchon and Manny Silberstein, exemplify this generosity. Fanchon and Manny worked for the State Department and lived abroad for years while Manny was in the Foreign Service, making them ideally suited for roles as docents—Fanchon in the Hirshhorn Museum and Sculpture Garden and Manny in the Freer and Sackler Galleries. Chatting with them revealed how dedicated and passionate they are about the Smithsonian. Fanchon has written a book that includes some of her most rewarding Hirshhorn experiences. One such moment was when she helped a couple unfamiliar with modern art gain new insights into the artists’ intentions by asking them to concentrate on certain essentials, such as lines and circles. Manny told me a terrific story about his first day at the Sackler Gallery. Feeling confident after a year of training, he had prepared to give his first probationary tour to a typical Sackler audience well-versed in Asian art. To his surprise, when the doors flew open, about 40 inner-city high school students came in, and Manny had to change his remarks on the fly. The tour went so well that after it was over, one young man told Manny, “If I had any money, I would give you a tip.” Unexpected connections like these are priceless, both for our volunteers and for our visitors. 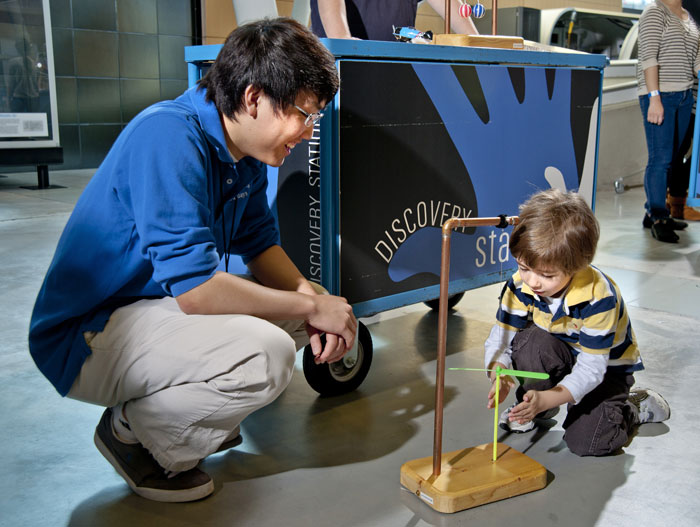 A young visitor explores the properties of a whirlygig at one of the Air and Space Museum’s Discovery Stations.

Peace Corps founder Sargent Shriver noted, “Of all our ideals, none surpasses the importance of service.” The service that our volunteers provide helps transform the Smithsonian into a more dynamic Institution, one better able to meet the needs of our visitors online and in person. As Fanchon Silberstein observed, the glue that binds all Smithsonian volunteers is pride about working here. That pride is a two-way street, and I feel it every time I see our volunteers in action.