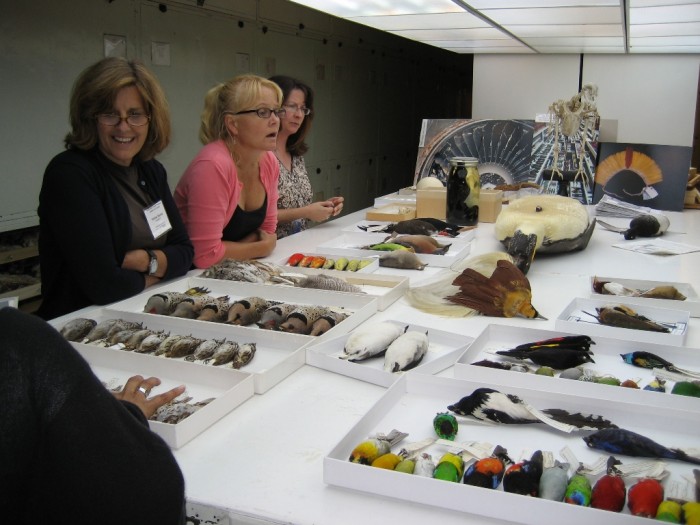 Smithsonian Science Education Academies for Teachers (SSEATS) bridge formal and informal science education for educators by combining training in science content and pedagogy with behind-the-scenes experiences throughout the Smithsonian.

As someone who remembers the hassle of using rudimentary computer punch cards when I was a grad student at Berkeley, the dynamic changes in technology today never cease to amaze me. The convergence of technological power and shrinking costs are making real the promise of fundamental discoveries that will yield medical breakthroughs and unimaginable leaps in human potential. Take the price of mapping an individual human genome: Six years ago, it cost a million dollars. Now it can be done for a thousand. Supercomputers with ever more power are opening up new possibilities for collaboration and innovation. The secrets of the universe are unfolding before us as we peer deeper into space, finding out more about what else and who else might be out there. Our grandchildren have access to knowledge using smart tablets we never dreamed of, and are learning on their own in ways unimagined before.

President Obama recognized the opportunity before us when he told participants at the third White House Science Fair, “This is the time to reach a level of research and development that we haven’t seen since the height of the space race.” But if we’re going to succeed with a modern-day equivalent of the Mercury project, the nation must provide the mathematicians and scientists and engineers that the innovation age demands by improving our science, technology, engineering, and math education—STEM. Of the 20 fastest-growing job fields, 15 require advanced math and science skills, but only 7 percent of U.S. eighth-grade students have high-level skills in math and only 10 percent have advanced science skills. Compare that to their counterparts in Taipei and Singapore, where students attain advanced proficiency at the rates of 49 percent and 40 percent, respectively. If we are to fulfill our promise, we must close the STEM education gap that threatens our progress. At the Smithsonian, STEM education has long been a part of our mission to diffuse knowledge for the benefit of the American people. And recently, those efforts have attracted the attention of Washington—including the President. 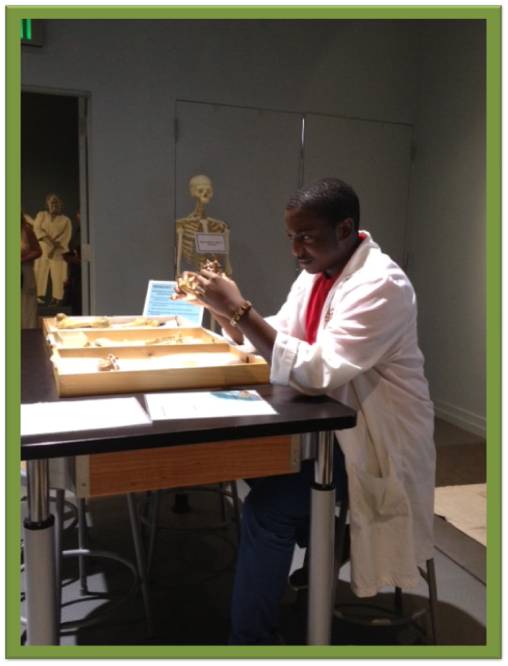 High school student Dion Anderson examining a spinal cord in the Anthropology Lab at NMNH as part of the Youth Engagement through Science (YES!) program

We were thrilled to see an allocation of 25 million dollars in the President’s 2014 budget for STEM education directed to the Smithsonian. We don’t have the money yet, and in this budget atmosphere anything could happen, but this is an enormous vote of confidence in what we have been doing here at the Smithsonian, one that we can all take pride in. As a part of the proposed funding, we have been mandated to coordinate STEM efforts with government agencies such as NASA, the National Oceanic and Atmospheric Administration and the Department of Education, while delivering educational materials related to their missions along with our own. We will continue our leadership in reducing the gap between formal and informal learning, particularly by using digital technologies. We will continue to develop educational materials that meet state standards, as well as facilitate partnerships and adopt professional development strategies that align with federal STEM goals. We will bring our special assets to this formidable task, including more than 500 scientists, numerous education programs and the 137 million objects in our collections. We will even turn STEM to STEAM by adding arts to the equation and using the creative arts as a way to spur insights into science and math.

This new initiative will build on the work of our museums and research centers, as well as that of the Smithsonian Center for Learning and Digital Access (formerly SCEMS) and the Smithsonian Science Education Center (formerly the National Sciences Resource Center). The SSEC not only uses digital programs, but also provides face-to-face teacher training, curriculum development, and community organizing. In 2010, SSEC was awarded one of the highly competitive Investing in Innovation (i3) grants sponsored by the Department of Education to create a project modeled on the SSEC Leadership and Assistance for Science Education Reform (LASER) program. The $25 million award, with the requirement that we raise $8 million in matching funds, supports work that focuses on low-income rural and urban school districts in New Mexico, North Carolina and Houston, Texas. The program is aimed at enhancing teachers’ professional skill level, developing assessment tools for teachers and students, and establishing administrative and community support systems to sustain progress. The project recently received high marks in an external review, leading to an extension through 2015 with the possibility of more funding in the future. 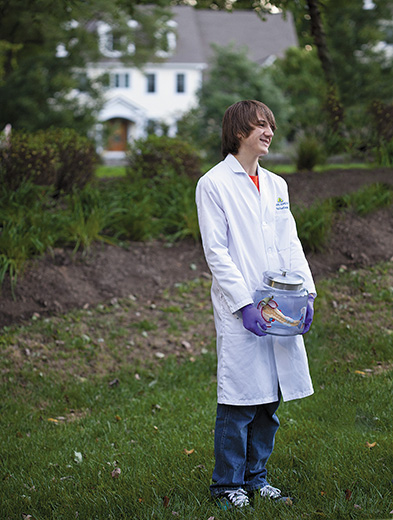 Only a sophomore in high school, Jack Andraka has invented an inexpensive test for a deadly form of cancer. (Photo by Ethan Hill)

A good example of a museum program that will have a role in the STEM initiative is the Natural History Museum’s Youth Engagement through Science (YES!) internship, which provides another path to scientific exploration and inspiration for young people. This six-week summer program brings together traditionally underrepresented youth and Smithsonian researchers and educators. Working alongside the students, experts from Smithsonian Gardens, NMNH and the Zoo use Smithsonian research collections to help stoke the students’ interest in the sciences and put them on the path to college and STEM careers.

When we nurture and inspire the next generation of scientific thinkers, amazing things can happen. Jack Andraka, a student from Maryland, is a prime example. Jack was bitten by the science bug at a very young age when his mom brought him to our Natural History Museum. As a 15-year-old high school sophomore, he invented an inexpensive test for pancreatic cancer, which prompted one of his mentors to call him “the Edison of our times,” and for which he was awarded a Smithsonian Magazine American Ingenuity Award. And 12-year-old Chase Lewis won a patent for his “refugee travois” in the Smithsonian-ePals Global Kids Invention Challenge. Spurred by the tragic sight of Somali women who had to leave children behind that they were unable to carry, Chase’s inexpensive wheeled device would prevent mothers in war-torn and famine-ravaged countries from having to make that terrible choice.

When President Kennedy gave his famous speech at Rice University in September 1962, urging the country to rally behind the goal of getting to the moon, he recognized that the purpose would “organize and measure the best of our energies and skills.” That inspirational message was on display when Jack accepted his American Ingenuity Award, and he threw down his own challenge to a new generation: “Instead of taking pictures of your food tonight and posting them on Instagram, how about instead…change the world with your ideas.” The Smithsonian is proud to partner with educators, learners and organizations to revitalize STEM education and “change the world with ideas.” Helping to create a scientifically literate workforce of visionary innovators like Jack and Chase, to paraphrase President Kennedy, is a challenge that we are willing to accept and one that we are unwilling to postpone.

From the Secretary: Education, Technology and the Smithsonian’s Service to the Nation

An innovation in renovation

From the Secretary: Celebrating innovation