This post by historian Pamela Henson was originally published by the Smithsonian Institution Archives blog, The Bigger Picture.

What is a researcher to do when the historic caption contradicts the information in the historic photograph?  Here at the Archives, we encounter this occasionally in our work and have to remember that sometimes people in the past made mistakes.  Just because something is written in beautiful 19th century penmanship doesn’t mean it is always correct. 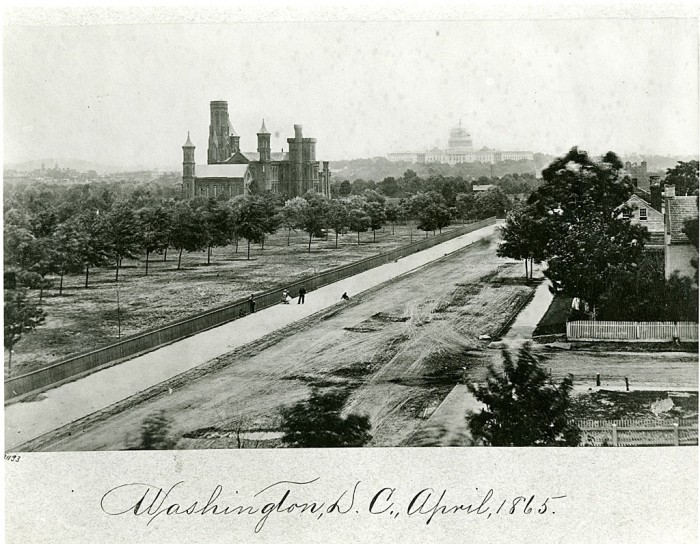 I encountered this issue recently when asked about the caption for an image of the Smithsonian Institution Building or Castle from the 1860s, probably taken by Mathew Brady’s Studio. There are several versions of this picture from slightly different angles and the picture is held by the Smithsonian Institution, the Library of Congress, and the National Archives, among other repositories. In one of our two copies, there is a beautifully written caption, “Washington, D.C., April, 1865.” This lovely picture, with a sweeping view of the National Mall, shows the Smithsonian Castle at the center. The view is looking east from what is now Independence Avenue, but was B Street at the time the photograph was taken. A few houses along B Street, SW, can be seen to the right. People are standing along B Street, with a fence between the street and the “Smithsonian Park,” which had been landscaped according to a plan by landscape architect Andrew Jackson Downing. The Castle is nestled among a stand of trees, far different than the stark flat Mall we know today. The Smithsonian’s Magnetic Observatory can been seen within the trees. The US Capitol is in the distance, with downtown Washington behind the Castle.

So what could be wrong with that caption? It looks like a Civil War era photograph? However, several things about the buildings tell us it could not have been taken in April 1865. The new dome is under construction on the Capitol – hard to see but just visible when enlarged. The dome was built from 1855 to 1866 and would have been further along in 1865. More important is the Castle itself. 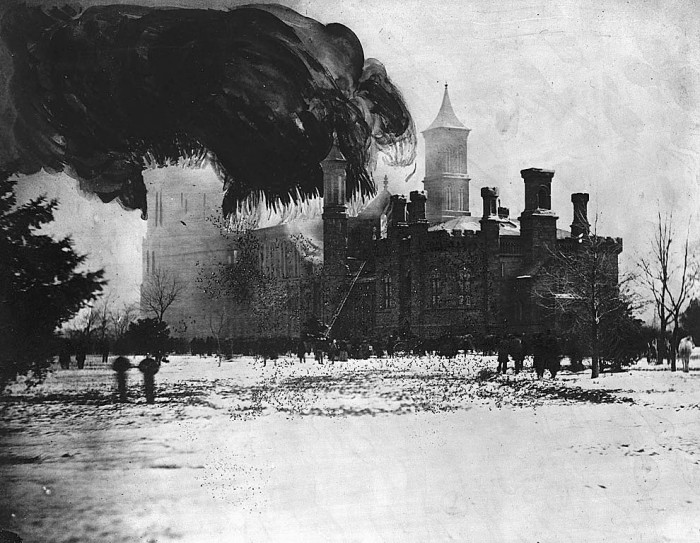 In January of 1865, the Castle was damaged in a devastating fire. We know from written reports that the roof over the center of the building collapsed, and the caps on the north towers were consumed in the flames. A photograph taken shortly after the fire captures the damage. 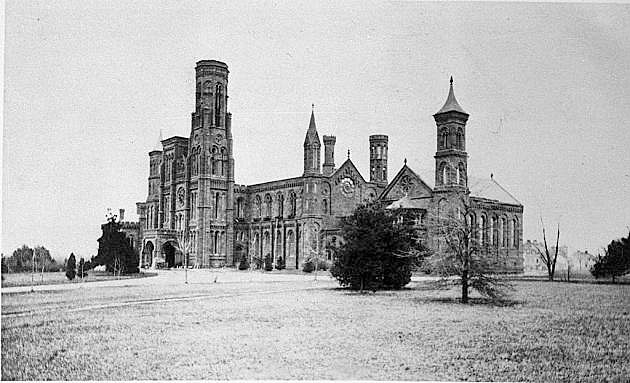 The Smithsonian Institution Building After the Fire, post-January 1865,

The fire pictures are also inaccurate. Photographer Alexander Gardner painted the flames into the photograph he took that day, and he put the flames in the wrong part of the building – set in the east wing, but the actual damage was more in the west wing and center of the building.

Burning of the Smithsonian Institution, January 24, 1865, sketch in Harper’s Weekly,

The Harper’s Weekly image has the entire building consumed in flames, again inaccurate since the east wing did not sustain much damage.

Going back to our original image, we now know that the Castle would not have had caps on the north towers in April of 1865, and the central roof was still under repair. So we know that this image was taken prior to the caption written on the image, probably 1863. Photo research requires us to compare and contrast the written with the image. A report on the fire detailed what parts of the building were damaged, refuting the fanciful images by Gardner and Harper’s Weekly. Visual information in the first image provides evidence that the image was not taken in April 1865, no matter how carefully written the caption is. While it may seem challenging, such detective work is often the most fun parts of our days, as we track down clues and convict the erroneous caption.

Slavery and the Smithsonian

The burning memory of a a “national calamity”