Upon seeing multimedia artist Rina Banerjee’s site-specific installation at the Sackler Gallery, my first reaction was that a giant jellyfish had made the Sackler its new home. A giant jellyfish with horns. On closer inspection the details came to life, adding to the sense that the gallery space had become fluid. The meandering line of shells, corals, coins, tiny figurines—all brought to mind the detritus typically left behind in the wake of rivers and oceans. Banerjee’s piece examines the many ways in which rivers connect us and divide us—how they affect our shared culture through globalization, commerce and manufacturing, immigration and migration—how they can give life or take it away.

The installation’s lengthy title itself winds like a long river, evoking the journey the water takes and the life it touches: A World Lost: after the original island, single land mass fractured, after populations migrated, after pollution revealed itself and as cultural locations once separated merged, after the splitting of Adam and Eve, Shiva and Shakti, of race black and white, of culture East and West, after animals diminished, after the seas’ corals did exterminate, after this and at last imagine all water evaporated…this after Columbus found it we lost it imagine this. 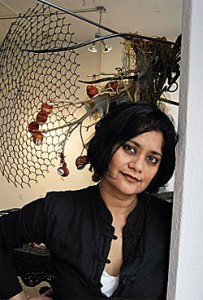 Banerjee’s own immigrant background flows through her work. Born in Kolkata, India, in 1963, Banerjee moved with her family to the U.K. before coming to the U.S. Banerjee’s Asian heritage and interest in globalization inform A World Lost, as the Ganges and Yangtze rivers were major sources of inspiration. Her personal history is an important part of her art as well, having trained and worked as a polymer research chemist before changing gears and pursuing an art career.

That background in science led her to incorporate materiality into her art, allowing her to explore the natural and the synthetic. “In some sense we can fabricate our own culture,” Banerjee has noted, and in A World Lost she has done just that, creating something living and breathing from the inanimate, blurring the distinction between the biological and the manufactured, and reminding us of the interconnectedness of humans and the water.

Art has the ability to transport us to other places and make us see the world in a different light. Part of the Sackler’s contemporary art series, “Perspectives,” Banerjee’s installation gave me a new perspective on the cultural and human impact created by rivers all across the globe.

A river runs through us all

Masonic mysteries and lost symbols at the Postal Museum

Pushing the boundaries of female identity in the Muslim world

About the Author: Marilyn Epstein

Marilyn Epstein is an editor in the Office of Communications and External Relations.