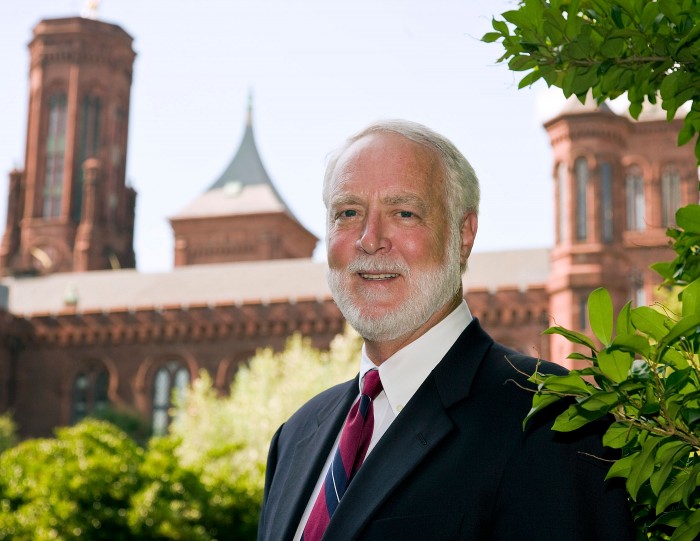 Secretary Wayne Clough announced today he will retire from his position at the Smithsonian in October 2014 after having served more than six years as head of the Institution. Clough joined the Smithsonian in July 2008, succeeding Acting Secretary Cristián Samper. Before coming to the Smithsonian, Clough served as president of the Georgia Institute of Technology for 14 years. His goal in joining the Smithsonian, Clough said, “was to help this remarkable institution prepare itself for a new and revitalized role in the 21st century and to ensure that when my work was done, an orderly transition to new leadership could occur.”

The Smithsonian’s governing body, the Board of Regents, will form a committee to conduct an international search for a new Secretary. Regent John McCarter Jr. will chair the search committee; Regent Shirley Ann Jackson will serve as vice chair.

“When I became Secretary in 2008, I believed strongly that the Smithsonian had enormous untapped potential, especially in digital technology, to reach millions of people and serve as a resource for those who cannot visit Washington,” Clough said. “I am confident that with our initiatives underway in bioconservation, education, digitization and fundraising, this is the right time to announce my plans for next fall.”

Dr. Clough notified John G. Roberts Jr., Smithsonian Chancellor and Chief Justice of the United States. In response, Roberts wrote, “Your enthusiastic embrace of the Smithsonian’s mission has earned the public’s admiration and support, which is so vital as the Institution tackles the many ongoing challenges….For now, the Regents are fortunate to have your continued leadership, dedication and wisdom. We are looking forward to the exciting plans for the year to come.”

“Secretary Clough has served the Smithsonian with great distinction,” said France A. Córdova, chair of the Smithsonian’s Board of Regents. “He has led new initiatives to broaden access to millions more people around the world, raising the reputation of the Smithsonian at home and abroad. He has championed a visionary and inclusive strategic plan and overseen bold new facilities and projects. The Regents are grateful that Wayne will continue to serve until a successor is on board; we look forward to another outstanding year for the Smithsonian.”

Clough is responsible for an annual budget of $1 billion (federal and non-federal funds), 6,400 employees and more than 6,200 volunteers. Since his arrival, the Smithsonian has raised $893 million from private contributions, which included a record-setting year in 2012 of $223 million. The Institution has started planning a national fundraising campaign to launch in fall 2014. 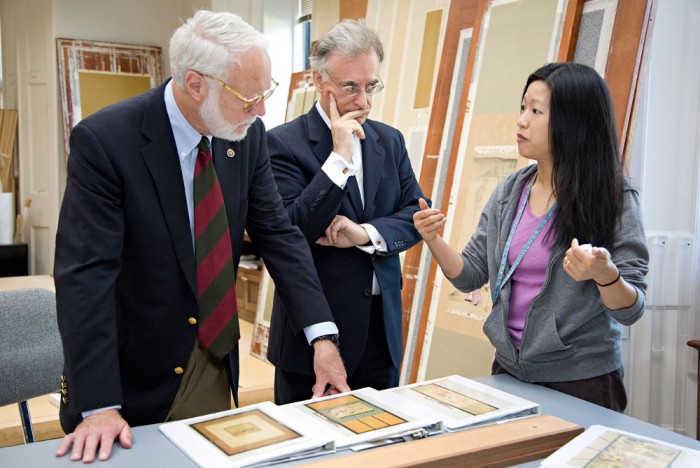 Clough points to the Smithsonian’s first comprehensive, collaborative strategic plan as his signature project, which laid the foundation for the goals he wanted to achieve. Focused on four main themes, or Grand Challenges—biodiversity, world cultures, the universe and the American experience—the plan encompasses numerous projects and encourages entrepreneurship. The creation of the strategic plan was a pan-Institutional endeavor. “Change is not often easy” Clough said, “so my thanks to the more than 1,500 people inside and outside the Institution who worked so hard to discuss, draft, and implement our comprehensive strategic plan, the first such plan in the history of the Smithsonian. All of our actions are now guided by four Grand Challenges, and our management is girded by solid principles and sound procedures. That flexible, cross-disciplinary plan has worked, and it will steer us through both tough times and bright days ahead.”

Clough’s lifelong commitment to education is evident in the museums, online and in the classroom. The Smithsonian now delivers educational materials to students and teachers in every state. Nearly 2,000 learning resources, linked to state standards, are available online. He also enhanced educational opportunities within the Smithsonian, which now hosts 800 fellows, 1,200 interns and approximately 800 research associates.

Clough also helped create dozens of partnerships with universities and cultural and scientific organizations to increase educational opportunities at the Smithsonian. A prime example is the creation of the Smithsonian-Mason School of Conservation with George Mason University and a degree program in conservation biology.

“With its vast collections and scholarship, the Smithsonian is in a unique position to offer informal education for people with lifelong interests in learning,” Clough said. One of the most visible examples of informal education is the Smithsonian’s award-winning website, www.seriouslyamazing.com, which poses fun questions with short answers and provides an opportunity to dive deeper into a subject with in-depth information from Smithsonian experts.

The core of the Smithsonian is its vast collection of 137 million artifacts, scientific specimens and works of art. Care of the collections became a priority under Clough, who established a new senior-level office for collections management across the Institution.

Clough also focused on bringing the Smithsonian into the digital age by increasing digital access to the collections and establishing two-way communication with the public, especially younger audiences. Within months of his arrival, Clough invited internationally known digital leaders and entrepreneurs to advise the Smithsonian on next steps in the digital world. Today, the Smithsonian has more than 3 million social media followers, and 144 websites viewed by 114 million people. His thoughts on how the Smithsonian has engaged people using digital technology, and what other museums and libraries are doing, are the subject of his free e-book released in late August, “Best of Both Worlds: Museums, Libraries, and Archives in a Digital Age.”

Accomplishments in biodiversity and conservation under Clough’s leadership include establishing the Smithsonian Conservation Biology Institute and a worldwide marine observatory program to study the effects of climate change on coastal ecosystems. He also helped the Smithsonian establish partnerships with dozens of organizations and the World Bank to create the Global Tiger Initiative, an international program aimed at raising awareness and helping conserve wild tiger populations. His monograph, “Increasing Scientific Literacy: A Shared Responsibility,” generated discussion on this important topic.

The Smithsonian now operates in more than 130 countries on a variety of projects, many of them coordinated with the federal government and the private sector. The rescue of the art and cultural heritage of Haiti following the earthquake in 2010, for example, was spearheaded by the Smithsonian. Art conservators, planning experts, engineers and Clough traveled to the island to help conserve 30,000 objects and artworks and train Haitians in museum conservation techniques. 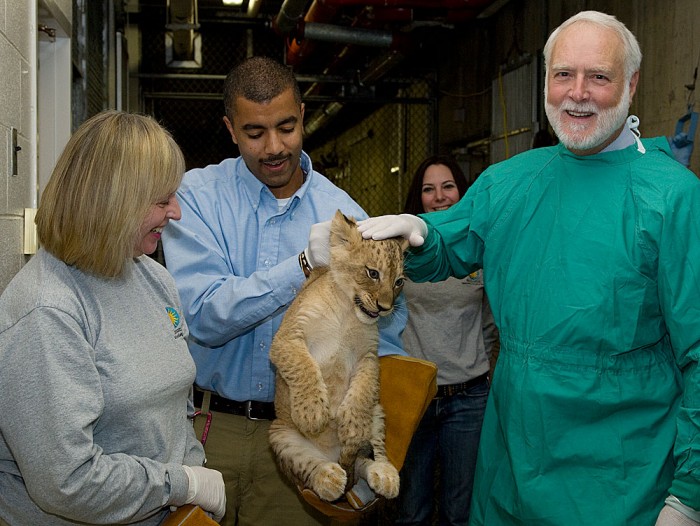 Clough oversees several renovation and construction projects that are underway. The Arts and Industries Building, which will be devoted to innovation, is being renovated and is scheduled to open in September 2014. The complete renovation of the Renwick Gallery will begin next year, as the work at the Smithsonian’s Cooper Hewitt, National Design Museum in New York moves toward completion. The Hazy Center of the National Air and Space Museum opened the James S. McDonnell Space Hangar in 2004 and welcomed NASA’s shuttle Discovery in April 2012.

Construction began on the $500 million National Museum of African American History and Culture, which is scheduled to open in late 2015. This fall, major artifacts such as the Pullman train car and a prison guard tower will be lowered into the museum site adjacent to the Washington Monument.

In announcing his plans to retire, Clough reassured staff: “Advancing the Smithsonian’s mission remains my priority. We’ve made a lot of progress, but there is always more work to do. As I know you do, I believe in public service, and whatever I do will continue in that vein. It has been an honor to serve with you, and I look forward to working with you in the year ahead. There is still much to accomplish, but your willingness to tackle any challenge and your belief in our mission promises a bright future for the Institution.”

Watch the webcast of the Sept. 18 All-Staff Meeting during which Secretary Clough discusses his plans for the coming year. >

On the Road in Alaska: The Secretary’s travel journal