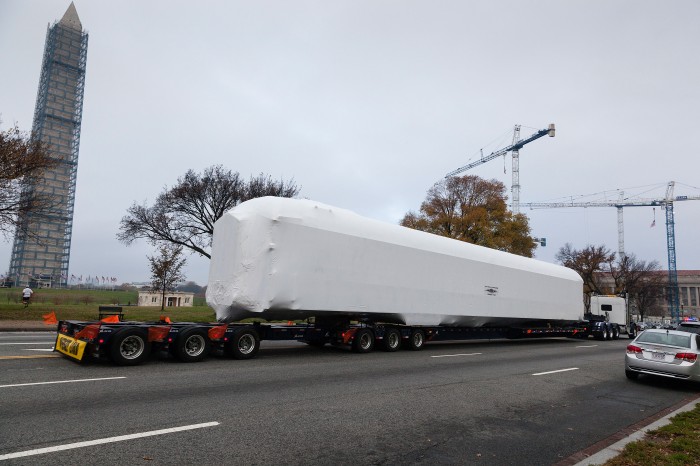 The shrink-wrapped rail car arrives at the site of the new National Museum of African American History and Culture. (Photo by James Di Loreto)

Construction on the Smithsonian’s National Museum of African American History and Culture reached a significant milestone with the arrival and installation of two signature artifacts in Novembver. A restored segregation-era railway car, circa 1918, and an early 20th-century guard tower from the infamous Angola prison in Louisiana promise to be two of the most captivating and though-provoking objects in the new museum when it opens in late 2015. They will be on display in the Segregation Gallery as part of an inaugural exhibition “Defending Freedom, Defining Freedom: Era of Segregation 1876–1968.”

Since the 77-ton, vintage rail car and concrete guard tower are too large to be installed after the the museum building is completed, they were lifted off a convoy of semi-trailers on Constitution Avenue between 14th and 15th streets by two 500-ton cranes and lowered 60 feet into the bottom levels of the museum now under construction. The remainder of the museum will be built around these two artifacts.

“It is both a humbling and an inspiring experience to witness these extraordinary and iconic artifacts placed in their permanent home in the museum,” said Lonnie Bunch, founding director of the museum. “The Jim Crow-era rail car and the Angola prison guard tower are two striking reminders of America’s segregated age and tell powerful freedom stories that our museum needs to share with the public. Together they present a unique opportunity to instill a profound appreciation of the everyday experiences, the inequality and the harsh realities that segregation and incarceration practices presented to African Americans—realities that shaped our collective national history.”

Today’s installation represents one of the most complex artifact-delivery operations in Smithsonian history, requiring special staging in multiple locations and months of planning. Before arriving from an off-Mall Smithsonian facility early this morning as part of a seven-truck convoy, the 80-foot-long rail car and cast-concrete tower underwent extensive restoration in Stearns, Ky. The railway car was then shrink-wrapped for protection and loaded for highway transportation onto semi-trailers for the three-day journey to Washington, D.C. Constitution Avenue between 14th and 15th streets was closed to vehicular and pedestrian traffic during the five-hour installation operation. 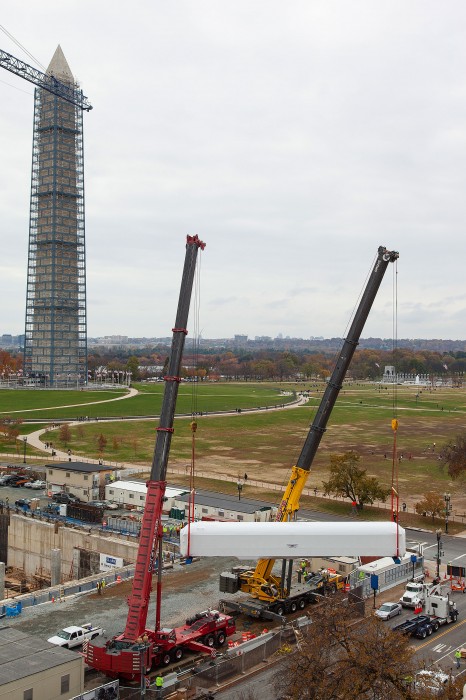 Cranes lower the rail car into position. Construction of the museum will be completed with the car already in place. (Photo by Donald Hurlbert)

The museum acquired the 44-seat Southern Railway car (No. 1200) in 2009 as a donation from a longtime friend of the Smithsonian, Pete Claussen, chairman and CEO of Gulf & Ohio Railways, and a member of the Smithsonian National Board. Built by Pullman Palace Car Co., the passenger coach was refurbished in 1940 and 1950 to create separate seating for white and “colored” passengers; it was used as a segregated passenger car from 1940 to 1960, serving routes in Kentucky, Tennessee, Georgia and Florida. Before it was donated to the museum, the rail car was stored at the Tennessee Valley Railroad Museum in Chattanooga, Tenn.

“This rail car belongs in the National Museum of African American History and Culture because it is a tangible remnant from America’s long years of segregation—and those remnants are rare,” said Claussen. “The separate water fountains are gone; the black and white sections of movie theaters are gone. There are very few objects that allow people to see what segregation was like, and this is one of them.”

Since 2012, the rail car has been undergoing extensive restoration by Wasatch Railroad Contractors at a warehouse maintenance shop in Stearns used by Big South Fork Scenic Railway. The 18-month restoration returned the rail car to its authentic 1940s design with a sylvan green, newly painted exterior. Funding for the restoration came from Norfolk Southern Railway, BNSF Railway and from the Save America’s Treasures program of the National Park Service.

“We had over 20 people work on this project…electricians, woodworkers, metal workers, general carpenters, restorationists and painters,” said John E. Rimmasch, head of the restoration project and CEO of Wasatch Railroad Contractors. “Once all the structural elements were done, we went to the cosmetic items, fixing hat racks, putting lights together, then started the paint process and that’s where the car gets its personality.”

The rail car will help the museum tell an all-important, all-American story of the physical manifestation of the Jim Crow-era segregation laws and how railroads interpreted them. Starting in 1900, railroads began segregating cars to accommodate state laws. South-bound passenger cars had to be outfitted so there was a divider between the front, for white passengers, and the back for “colored” passengers. Visitors to the museum will be able to walk through and around the rail car. Interpretive kiosks, sounds within the car and guided tours will let visitors understand the experiences of segregated train travel from the early 1900s until the Civil Rights Act of 1964.

The museum acquired the prison guard tower from the Louisiana State Penitentiary in 2012 as a donation to explore post-Civil War incarceration practices and to tell the story of Angola prison as a 19th-century plantation site. Angola is one of the largest maximum-security prisons in the country.

The plantation land was bought by Samuel James, a major in the Confederate Army, who in 1869 was awarded the lease to run the state’s penitentiary. It housed inmates in old slave quarters, which later became known as Camp A. The prison officially opened in 1901 and drew some of its labor directly from the state’s prisons in a common post-Civil War penal labor practice known as convict-leasing that allowed private individuals to lease prisoners.

The guard tower was erected between the 1930s and 1940s and used to guard inmates in Camp H. Measuring almost 21 feet tall by 14 feet wide and made of cast concrete with steel reinforcement inside, the tower represents surveillance and discipline methods during the Jim Crow and segregation eras, when the prison population was predominantly African American. In July 2013, the guard tower was dismantled from Camp H at the Louisiana State Penitentiary and transported to the restoration facility in Stearns. It was loaded into the museum’s lower level in two pieces and will join the rail car in the forthcoming inaugural exhibition on segregation.

The museum also acquired a 6-by-9-foot cell from another section of the prison that was also built on former slave quarters. It will be installed later in a different section of the museum. 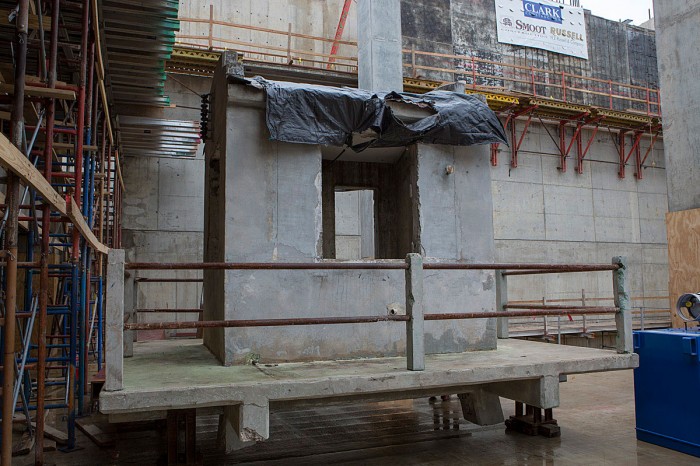 This guard tower from Angola Prison in Louisiana will help tell the story of segregation in an inaugural exhibition at the new museum. (Photo by Michael Barnes)

A People’s Journey, A Nation’s Story: The Reviews

A People’s Journey, A Nation’s Story: The Grand Opening