Home History & Culture American History Museum Batter Up! It’s Opening Day no matter where you are

Opening Day is a state of mind. Countless baseball fans recognize this unofficial holiday as a good reason to call in sick at work or be truant from school and go out to the ballpark for the first of the regular season games. Now, we’re not suggesting playing hooky or skipping school by any means, but if you can’t make it to the ballpark, catch some baseball history at the Smithsonian or in your own neighborhood at one of these Smithsonian Affiliates.

Thanks to a donation from Aberdeen, S.D. native Paul Gertsen, a collection of Northern League (1900-1971) baseball materials showcasing the history of baseball in South Dakota will open soon. “The Northern League was the highest level of professional baseball in South Dakota, and an important minor league system in the upper Midwest. So many great players were on those teams, such as Hank Aaron, Jim Palmer, Lou Brock and Willie Stargell. The league’s history is rich, and its South Dakota roots run deep. I am proud that the society is now home to the most complete and definitive collection of Northern League materials in existence. It is truly an honor to accept this collection, and it is very exciting for anyone interested in the history of South Dakota baseball,” commented Dan Brosz, curator of collections at the Museum of the South Dakota State Historical Society. Contact Jay Smith, Museum Director for more info 605.773.3798. 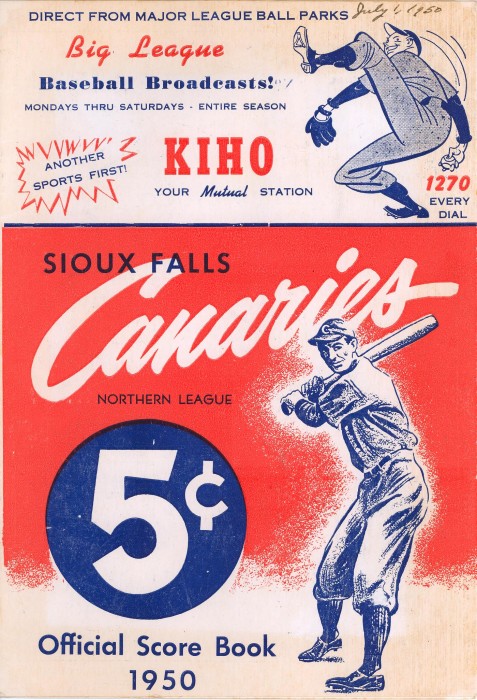 At the National Museum of American Jewish History (Philadelphia)

Chasing Dreams: Baseball and Becoming American is on view through October. The exhibition displays the central role baseball has played in the lives of American minority communities as they sought to understand and express the ideals, culture, and behaviors of their homeland—or challenge them. Programs for this show include talks with ESPN and major league baseball historians, and a summer film series featuring baseball. 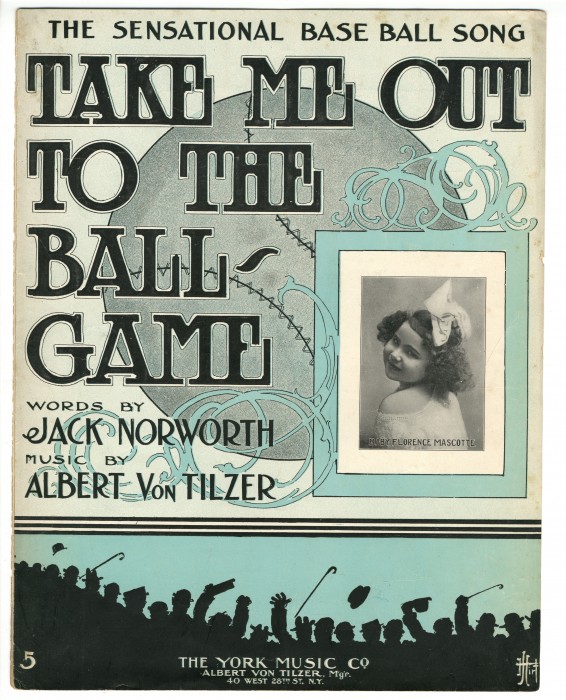 Sheet music for “Take Me Out to the Ball-Game” by Jack Norworth and Albert Von Tilzer, 1908
(Courtesy of Andy Strasberg / National Museum of American Jewish History)

The Western Pennsylvania Sports Museum at the Heinz History Center will showcase artifacts from one of the greatest moments in sports history through May 1– Mazeroski Artifacts from the 1960 World Series. Fans will enjoy Mazeroski’s Pirates uniform and bronzed 35-inch Louisville Slugger bat accompanied by additional items from 1960, including the pitching rubber and first base from Game 7, shortstop Dick Groat’s jersey from his 1960 Most Valuable Player season, and a life-like museum figure of Mazeroski hitting the legendary home run. 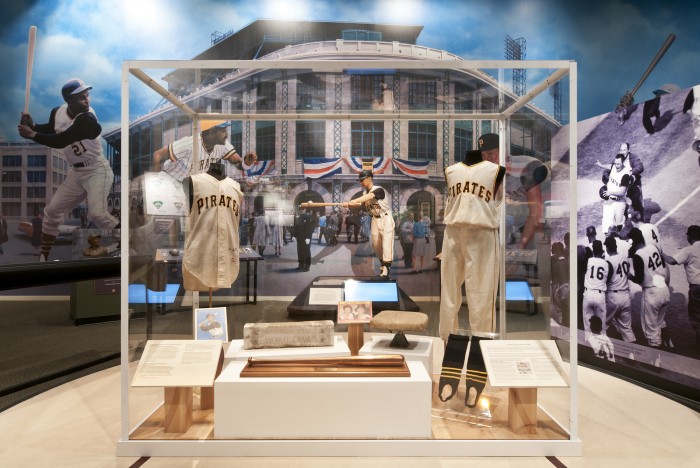 At the University of Illinois at Urbana-Champaign (Champaign, Illinois)

The Rare Book & Manuscript Library has made a number of important book and manuscript additions over the past few years. Babylon to Baseball: Recent Additions to the Rare Book & Manuscript Library will showcase over thirty new pieces. Collections and items to be highlighted range from a 4000 year old Babylonian clay tablet to scarce baseball reference works once owned by the American League President’s Office. 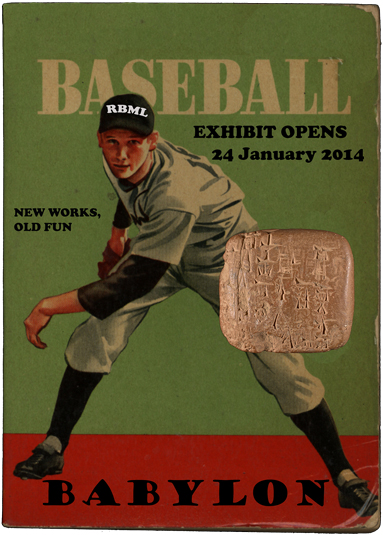 Dodgers: Brotherhood of the Game, on view through September 14, explores the team’s storied past through four players and a Hall of Fame manager, each of whom made history in his own right: Jackie Robinson, Fernando Valenzuela, Chan Ho Park, Hideo Nomo, and Tommy Lasorda. From their original roots in Brooklyn to today’s home in Los Angeles, the Dodgers are trailblazers in the world of sports, on and off the field. The franchise is dedicated to supporting a culture of winning baseball, providing a first-class, family-friendly experience at Dodger Stadium and maintaining strong partnerships in the community. 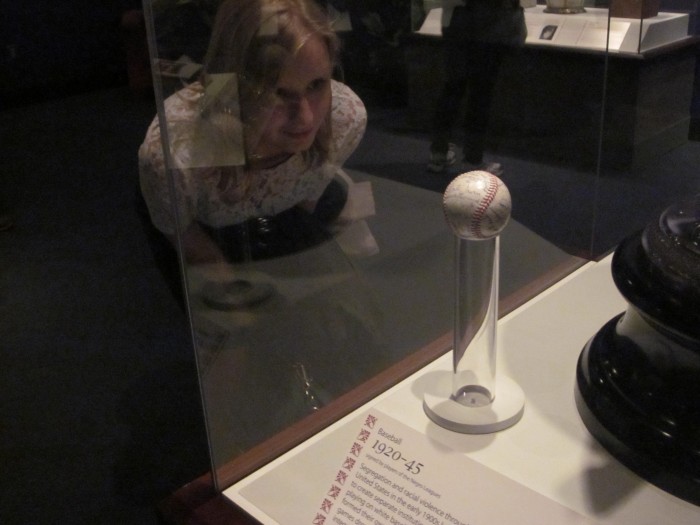 Checking out some baseball history at NMNH. (Photo by Elizabeth Bugbee)

At the Smithsonian’s National Museum of American History (Washington, D.C.)

The American History Museum boasts the best in baseball history, including a Secret Compartment Baseball (1942). During World War II, the U.S. Military Intelligence Service created “care packages” with the intent of assisting Allied prisoners’ escapes from enemy containment. Baseballs were often used to smuggle in different items to the prisoners through secret compartments.

Before Jackie Robinson rocked the baseball world by becoming the first integrated baseball player in history, African Americans played in separate leagues. On view also in the American Stories exhibit is a Negro Leagues Baseball (1920-1945), signed by players of the Negro Leagues, which drew millions of fans during their height.

Through Museums on Main Street at the Smithsonian Institution Traveling Exhibition Service and possibly coming to a small town near you—Hometown Teams. Hometown Teams tells the story of sports as an indelible part of our culture and community. For well over one hundred years sports have reflected the trials and triumphs of the American experience and helped shape our national character. Whether it’s professional sports, or those played on the collegiate or scholastic level, amateur sports or sports played by kids on the local playground, the plain fact is sports are everywhere in America. Our love of sports begins in our hometowns–on the sandlot, at the local ball field, in the street, even. Americans play sports everywhere. 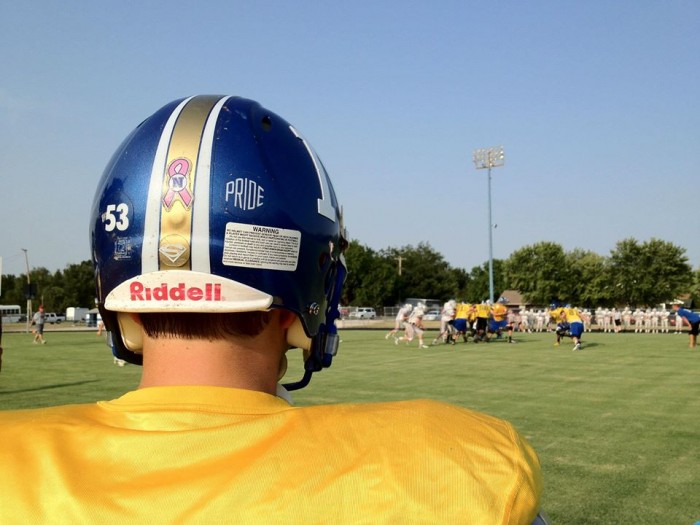 And last but not least, the exhibition may not be on the road anymore, but you can still view Beyond Baseball: The Life of Roberto Clemente through an online exhibition from SITES, based on an original exhibition from the Museo de Arte de Puerto Rico, a Smithsonian Affiliate. Clemente was born in the summer of 1934 in a house of concrete and wood on an old country road in Barrio San Antón, Carolina, Puerto Rico. He died on December 31, 1972, in a plane crash a few miles from his birthplace while attempting to deliver aid to earthquake victims in Nicaragua. In his thirty-eight years, RobertoClemente became a baseball legend in the United States, but in his homeland and throughout Latin America he became a national and cultural icon.

This post was originally published by the blog The Affiliate.

About the Author: Elizabeth Bugbee