Home Collaboration On the Road in Belize II: The Secretary’s Travel Journal

On day two of his stay at Carrie Bow Marine Station, Secretary Clough ventures into the murky waters of a mangrove swamp, a critical part of the marine ecosystem. Read part one here >>

After being fueled by one of Martha’s hearty breakfasts on the morning of the 11th, we load our gear on the Hangman with Alvin and Earl in order to go out to a reef that Emmett had explored years before that will likely have snapping shrimp populations. Joining us are Johnny, Zach, Val, Caitie, Solomon and Justin Campbell, who works with Val. Emmett checks several sites before finding the snapping shrimp he seeks. Several of us put on snorkeling gear while others don SCUBA equipment in order to go deeper and collect specimens.

Below the surface a forest of staghorn coral appears, some areas lightly populated and others forming large colonies that create hotels for the tropical fish that appear in abundance. As soon as I get my head underwater I hear a slight snapping noise. The tiny snapping shrimp below are letting us know they know we are here. It is hard to believe that such a small organism could possibly make such large noise, but it happens because there are so many of them.

Fish are everywhere, some flashing by in schools, others guarding holes and crevices in the coral where they make their homes. They are spectacularly diverse in coloring, shape and size and I remember that some species vary in color and shape depending on age and sex. I realize that it is going to be a challenge to name them all, but at Carrie Bow I can call on some of the world’s experts to help me. Attached to this journal is a list of the 43 species I saw—a small percentage of the species that live in the seas around Carrie Bow. Sadly, Val tells me that in spite of seeming vitality of marine life, the reefs are only moderately healthy as they are declining due to the effects of ocean warming and acidification, contamination of the water by humans, and for other reasons not fully understood yet.

We remain at the reef for about an hour and a half, collecting specimens of snapping shrimp and other species before returning to the cay.

After lunch, we head out to an island that is still ringed with mangroves. Zach takes us up a channel to a spot where the mangroves are thick and their roots dangle into the water in profusion. I marvel at this amazing plant and its ability to grow so well in salt water, but at the same time I am trying to figure out how we are going to snorkel here. What might lie in wait under all those dangling roots? This becomes even more of a question after we jump into the water made cloudy by silt and suspended organic matter. 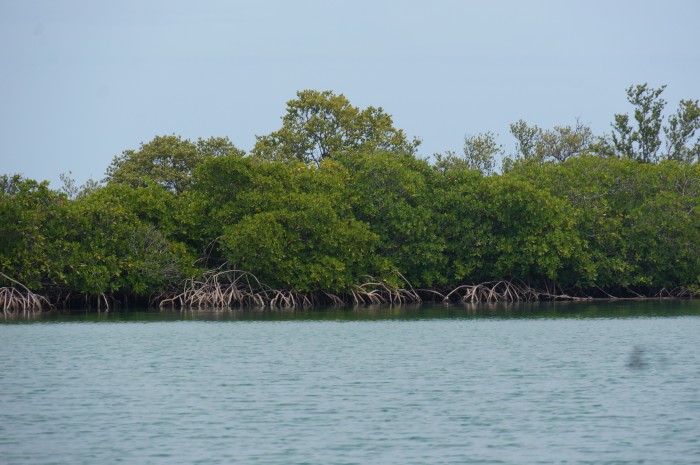 Mangroves are a vital part of the marine ecosystem. (Photo by John Gibbons)

As instructed by Zach, I dutifully swim towards the root line of the mangroves, fully prepared to beat a fast retreat in an instant. Yet with each stroke closer a view begins to form of a world apart under the mangroves trees. There are roots aplenty here, but they frame a continuous passage that works like a superhighway for fish that pass by. These are mostly smaller species, such as anchovies and tomtates, but there are also schools of yellowtail snapper and sergeant majors. In and amongst this flowing sea of life cruises the sleek shape of a barracuda, which it seems, only needs to open its mouth to snag a meal. This riot of life illustrates the importance of mangroves in the marine environment. They provide a safe haven for fish and many other species, are a vital carbon sink that helps absorb carbon dioxide from the atmosphere, and serve as a catchment that helps create island habitats for birds. Beyond the confines of the roots the channel bounded by the mangroves is also rich with life. One of the more curious creatures is an upside-down jellyfish, which lies at the bottom of the channel, moving in pulses by contorting its body as it photosynthesizes the filtered sunlight that makes it to the bottom. Although I approached the mangroves with some trepidation, I leave with a new respect for their unique role in sustaining the marine habitat.

We speed back past Carrie Bow out beyond the ocean-side breakwater reef to find blue water. About a half mile out the shallower water, which reflects the underlying near-surface reefs, turns navy blue as the reef dives down a hundred feet and beyond. Snorkeling here is a marked contrast to the cloudy water of the mangroves. Conditions are crystal clear and you can see all the way down to another world of the sea. Below passes a parade of large nurse sharks and even more spectacularly, two spotted eagle rays flapping their way gracefully through the deep waters. As Val and Emmett point out, there are few places in the world other than Carrie Bow where within 10 minutes you can be atop a shallow staghorn reef, in a mangrove swamp and hovering over a 100-foot-deep reef. 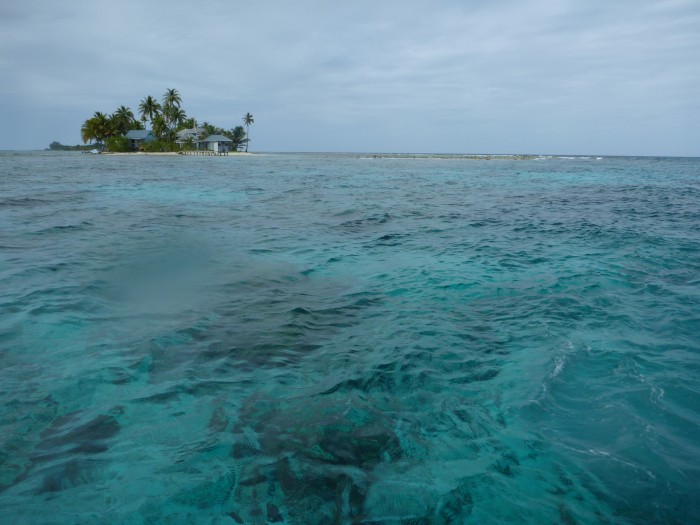 Swimming in to shore. (Photo by John Gibbons)

We turn for home, but will swim the last 200 yards to shore in order to take a look at the progress on the underwater observation platform being created to observe sea grass near Carrie Bow. Snorkeling along the way we see some new species of fish we had not seen earlier and find examples of Elkhorn corals that extend out like small trees that resembling a multi-pronged elk horn. Nearby are examples of hybrid corals that combine features of staghorn and Elkhorn. Emmett explains that these corals are sterile like mules that result from interbreeding horses and donkeys and unable to reproduce themselves.

Closer into shore we watch as Justin and Caitie sink the white plastic poles that will be strung with nets in a grid to capture the creatures that live in the sea grass so changes to the grass beds can be observed over time. As I swim closer to shore, I come across a flounder that peers up at me with eyes set on one side of its flat body. Not pleased with my intrusion, he flaps slowly away. 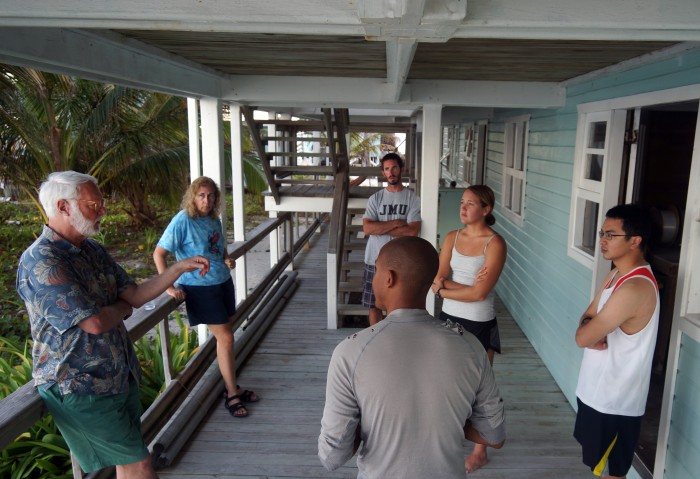 Discussing research with (from left) Valerie, Justin (back to camera), Zach (facing camera) Caitie and Solomon (Photo by John Gibbons) 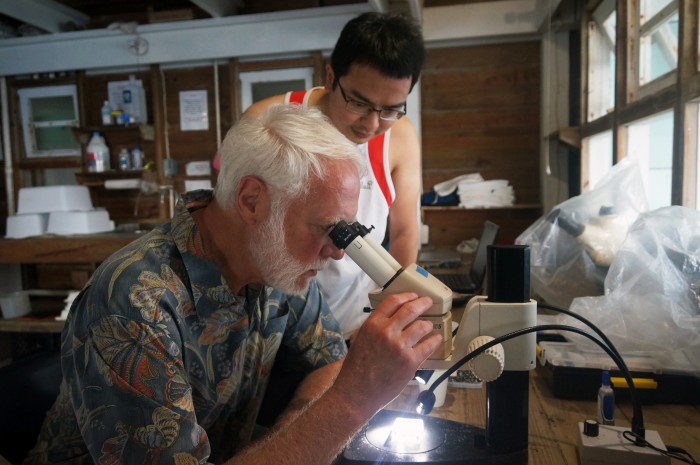 Back on shore I spend some time with Justin, Caitie and Solomon talking about their research interests and plans for future experiments. Their enthusiasm reminds me of my time as a doctoral student at UC Berkeley and the excitement that comes in the search for new knowledge. Solomon caps our discussions off when he offers us an up-close-and-personal encounter with one of the snapping shrimp specimens he collected earlier in the day. Tiny when viewed by eye, under the microscope these shrimp look formidable waving their big claw and unintimidated by any threat we giants might make. So it is that from big sharks and rays to tiny crustaceans, we have in one day experienced the wonders of our oceans, courtesy of a dot of land called Carrie Bow Cay.

It has been a short but entirely effective visit as I have been able to develop an appreciation for the importance of Carrie Bow Cay as a resource for Smithsonian researchers and hundreds of other colleagues who have visited.  I am also more than ever encouraged by the Tennebaum Marine Observatory Network concept and its value to our understanding of our oceans that are facing ever increasing pressures from climate change, development and global marine traffic. 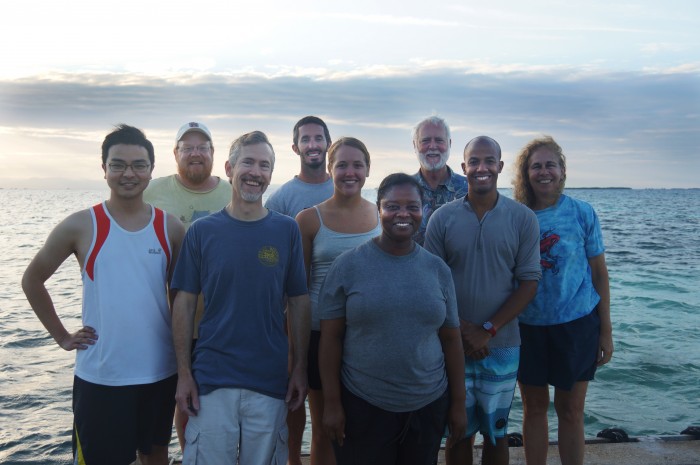 On the final leg of his journey to Belize, Secretary Clough ventures ashore and back in time to visit the Mayan city of Xunantunich. Read Part Three here >>

(All images via Wikipedia Commons unless otherwise noted.)