The presidential campaign of 1896 was an emotional one—and much of the political maneuvering may look familiar to voters today. A key player in the political drama was a man whose name is associated more with pianos than hardball politics. In this post for the American History Museum’s blog, “O Say Can You See?” volunteer researcher Larry Margasak explores piano manufacturer William Steinway’s role in the 1896 campaign.

William Steinway had more than pianos on his mind as he strolled to his Third Avenue polling station in New York City, preparing to cast his presidential ballot on November 3, 1896. After arriving, he marked an X on the ballot, in a place where he had never done so before. Steinway’s politics had just gone through a traumatic change.

“This is the first time in my Life that I voted any but the democratic ticket but this year the danger of democratic candidature of Wm. J. Bryan and the unlimited free coinage of silver is so great, that no true democrat can act otherwise than to vote for McKinley and sound money,” Steinway wrote in his diary. 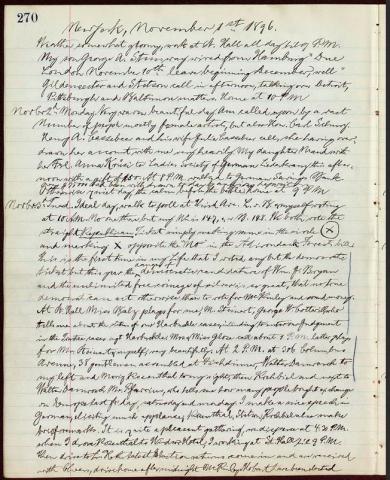 The page of Steinway’s diary in which he explains his vote. The full transcription of the page is available.

A fascinating story of political drama brought Steinway to vote for Republican candidate William McKinley in the last weeks of his life (Steinway died of typhoid fever November 30, 1896). That story has many elements of today’s political campaigns: the political clout exercised by Steinway’s German-American political organization; polling of German-Americans; the use of economic class warfare as a campaign issue; and Steinway’s use of a relatively new technology— a phonograph recording—to listen to speeches of McKinley and his Democratic opponent, William Jennings Bryan.

Steinway even suspected—wrongly—that his organization was the victim of what would be known today as a political “dirty trick.” The issue was a public letter appearing to support the Democratic position on silver coinage, signed by a top official in Germany. Steinway’s group believed it was phony, written by Bryan’s supporters. It turned out that the letter was authentic.

We know a lot about William Steinway (born 1835), of Steinway & Sons piano fame, because his diary (1861-1896) is part of the Smithsonian’s collections at our Archives Center. Thanks to many years of transcription and research, you can now read the diary online. 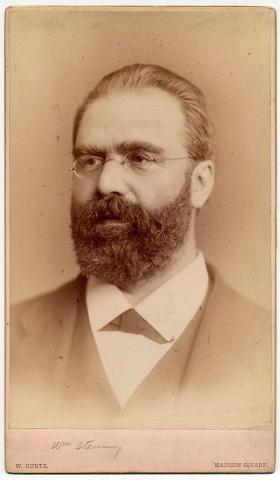 In the election of 1896, unlimited silver coinage vs. the gold standard brought out the same kind of emotions as gun control, abortion, or immigration today. The debate wasn’t far off from today’s class warfare arguments between Republicans and Democrats over who is protecting working Americans.

Many Democrats argued that a restricted money supply would lead to lower wages and depressed prices for farmers and others. These “silverites” contended that adding silver coins to the money supply would make more money available for higher wages, farmers’ profits and debtors needing to pay off loans. It also would boost profits for Western silver mine owners and benefit their employes.

The nation had gone on and off the gold-only standard since the issue first surfaced in 1873. In that year, the gold standard was adopted. But silver coinage was added five years later, after an economic depression. Fast forward to 1893. The nation’s worst depression to that point began that year. Each party blamed the other. The stage was set for a gold-versus silver showdown in 1896.

1896 campaign buttons from American History’s collection. “16 to 1” referred to the weight ratio of silver to gold in the coinage of money: 16 ounces of silver equaled an ounce of gold. The “cross of gold” button is a reference to Democratic nominee William Jennings Bryan’s speech in favor of silver coinage, the convention address that won him the party’s nomination for president.

In this environment, enter William Steinway and his aggressive politics. Steinway was a founder and president of the German-American Sound Money League, formed to support the gold standard. Politically potent groups today throw their support behind parties and candidates who back their key issues, and work against those who don’t. The League exercised the 1896 version of that tactic.

The League wrote the chairman of the Republican National Convention that German-Americans “will support only that party” whose platform backed the gold standard, and would refuse to vote for any candidate who “does not pledge himself to stand by this declaration,” according to the New York Times on June 17, 1896. Later that month, the League used the same language in a letter to every delegate of the Democratic National Convention and urged the party to back the gold standard.

The tumultuous Democratic National Convention in Chicago didn’t listen to Steinway and other business interests. On the fifth ballot, the party chose Bryan as its standard bearer after he electrified many in the hall with some of the most famous words in U.S. political history: “You shall not crucify mankind upon a cross of gold.”

Steinway wrote in his diary entry of July 10, 1896, “To our horror Democratic Convention adopted a silver platform and nominated Wm. J. Bryan of Nebraska as the democratic candidate for President.” 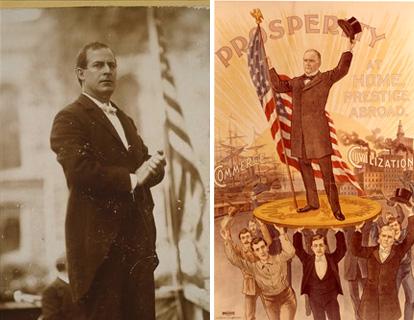 Steinway, a Democratic elector four years earlier, said in an interview with The Sun (of New York, published July 11, 1896) that he would vote for McKinley. He predicted that “the German-American sound money Democrats, together with hundreds of thousands of native American citizens, will go over and vote the Republican national ticket…”

The piano manufacturer wasn’t simply making a threat. He told The Sun that the League polled more than 700 German newspapers printed in the United States and only 31 advocated free coinage of silver. Steinway said there were 1.2 million German-American voters in the United States, and estimated two-thirds were Democrats. Steinway predicted, in The Sun article, that the Republicans would win if “an overwhelming majority of the German-American Democrats” vote for McKinley in the key states of Connecticut, New York, New Jersey, Pennsylvania, Ohio, Indiana, Illinois, and Michigan.

Every one of those states went Republican. 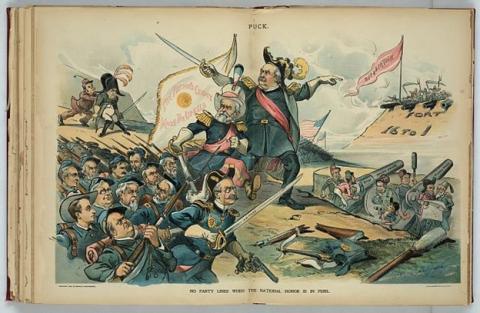 “No party lines when the national honor is in peril.” Puck magazine July 22, 1896. Library of Congress collection. Print shows the combined forces of the gold standard supporters, including some newspaper editors, and a reluctant William McKinley. They are marching under the standard “The Nation’s Credit Must Be Upheld”, toward a fort labeled “Fort 16 to 1” flying the banner “Repudiation”, and manned by soldiers armed with pitchforks and scythes. The newspaper editors are staffing the big guns labeled “Sound Money Press”.

Emotions ran high during the campaign. German-Americans attending a mid-October rally in New York’s Cooper Union punctuated the speeches of Steinway and others with “enthusiastic outbreaks of cheering,” the New York Tribune reported. Two weeks later, during a Bryan rally in the same hall, the names of Steinway and others “were loudly hooted,” according to The New York Times.

Steinway’s October 28 diary entry said that while attending the “American Institute Fair,” he was able to “hear phonograph Bryan and McKinleys speech.” His entry for November 1, with election day approaching, reported, “Sound Money parade a grand success, estimated that 130.000 men were in line.”

In the days after casting his vote, Steinway complained of illness. His last diary entry, on Nov. 8, 1896, said, “I still eat little, having no appetite.” He died 22 days later.

Left, right or somewhere in the middle

Collecting history as it happens at the 2016 political conventions