Home History & Culture American History Museum When the cure is worse than the disease: Six cold and flu remedies you’re not taking today (for good reason)

If it seems like this winter you and everyone else has been getting sick, you’re not imagining things—the U.S. Centers for Disease Control and Prevention has declared a flu epidemic, as the disease has been hitting the country hard this season and will likely continue for several more weeks.

You may have already hit up your medicine cabinet or the cold and flu aisle in your nearest pharmacy looking for relief. It may surprise you that many medications that were prescribed decades ago contained ingredients that you definitely won’t find in cold and flu medicine today.

“Patent medications weren’t nationally regulated until the 1906 Pure Food and Drug Act, and even after that, it was updated and amended many times to include more regulations on what shouldn’t be included in over-the-counter medications,” says Katherine Ott, curator in the Division of Medicine and Science at the Smithsonian’s National Museum of American History. “So for a long time, medicines had ingredients that would never be allowed today.”

Smithsonian Science asked Ott about six cold and flu remedies in the museum’s collection that you won’t be taking today. 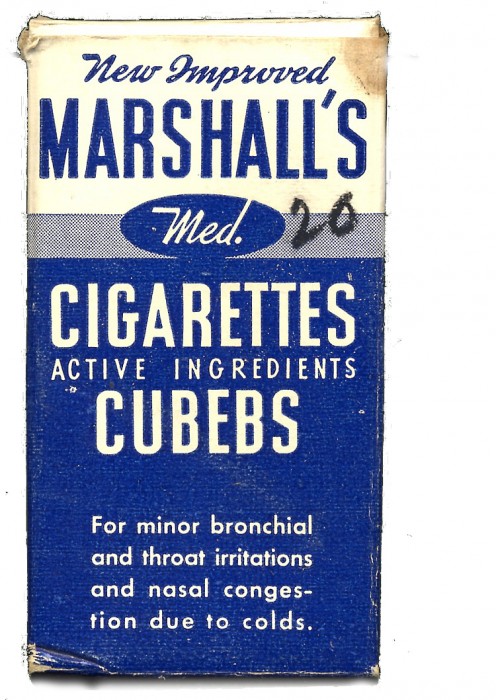 Ahh… nothing like a smoke to ease your cold. Sold in the 1940s, Marshall’s Med. Cigarettes were marketed for minor bronchial and throat irritations due to colds.

“In the early to mid-20th century, cigarettes would be produced with medicine in them and given to people with asthma and respiratory issues as a way to get the medicine into their lungs,” Ott says.

One of the active ingredients was cubebs, an herb said to help loosen mucus along the respiratory tract. 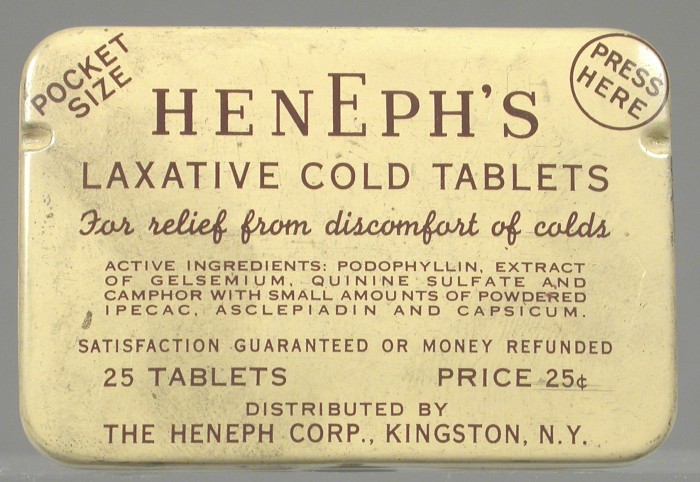 Sold in the 1930s, these tablets had active ingredients, including extract of gelsemium, which raises serious safety concerns as it’s said to contain substances that act in the brain to reduce pain; camphor, which is safe to apply topically (synthetic camphor is an active ingredient in Vicks VapoRub) but is unsafe to take orally and can cause serious side effects, including death; and ipecac, which can be used as an expectorant but is also used to induce vomiting after suspected poisoning. 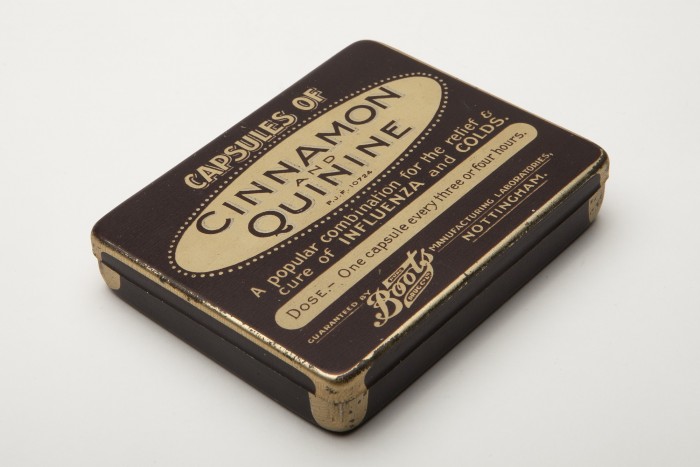 3. Capsules of Cinnamon and Quinine

Sold around the 1900s, these tablets claimed to be for the relief and cure of influenza and colds. Cinnamon’s active chemical cinnamaldehyde is said to help reduce inflammation and fight bacteria and fungi, which would certainly come in handy when getting over a cold or the flu, and some people still take it today. Quinine is now used to treat malaria, as it kills the parasites living in red blood cells. 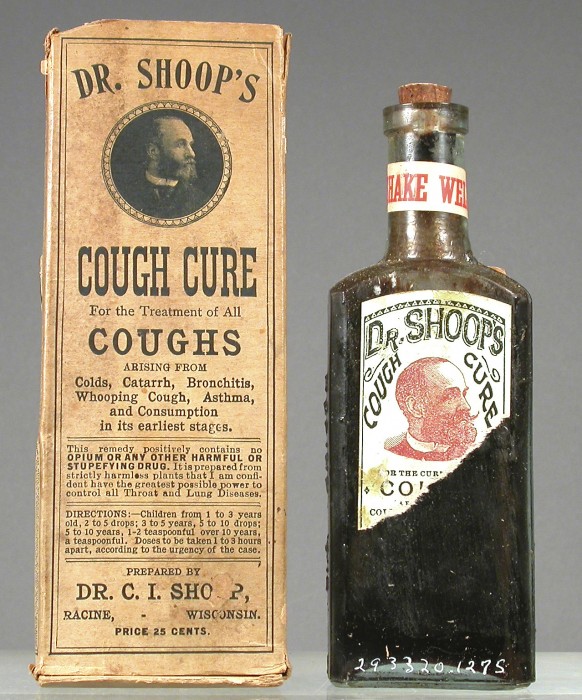 This cough medicine from the 1890s claimed to treat all coughs arising from colds, bronchitis, whooping cough, asthma and consumption (tuberculosis) in its earliest stages.

“Back then, people didn’t know specifically what was causing their ailments. They saw symptoms shared by many different illnesses and sought to treat them uniformly,” Ott says.

This particular cough syrup also included an interesting disclaimer, assuring patients that it positively contained “no opium or any other harmful or stupefying drug” and it was prepared from “strictly harmless plants.” Another indication of the troubling ingredients most medications had at the time. 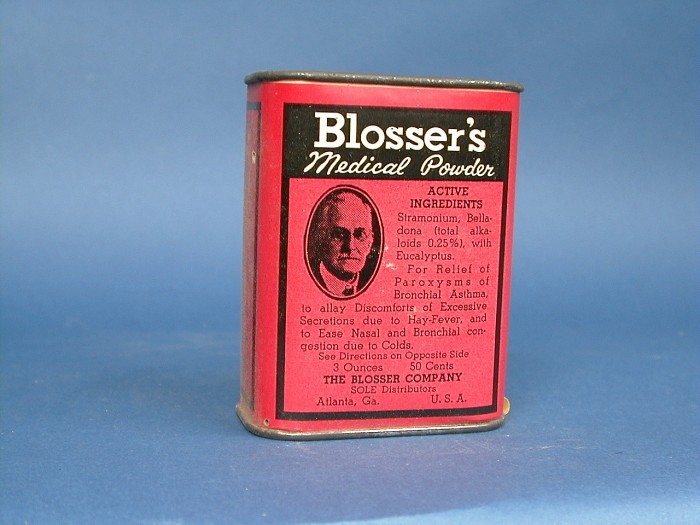 Speaking of troubling ingredients: This 1940s medical powder was used to ease nasal and bronchial congestion due to the common cold. It contained stramonium, which is used to relieve asthma symptoms but is also a powerful hallucinogenic that produces intense visions and is fatal in even slightly higher amounts than recommended. This powder also contained the extremely toxic belladonna, which is probably most commonly known as the poison of choice for murderous plots in Roman times–not as an active ingredient in a cold medication. 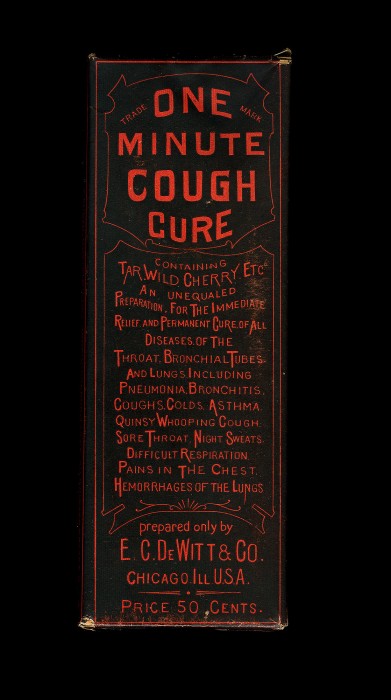 And finally, imagine picking up your cold or flu medication and seeing only one ingredient listed followed by “etc.”

“Early in the 20th century, drug manufacturers added anything they wanted into medications and wouldn’t list secret ingredients so others couldn’t copy their formulas,” Ott says.

This cold medication claimed to be a “one minute cough cure,” good enough to cure all diseases of the throat, bronchial tubes and lungs, including pneumonia, bronchitis, coughs, colds, asthma, whooping cough, sore throat, difficult respiration, pains in the chest, night sweats and hemorrhages of the lungs.

This post by Maria Anderson was originally published by Smithsonian Science.

Smoke gets in your eyes

Outbreak! On the front lines of a measles epidemic