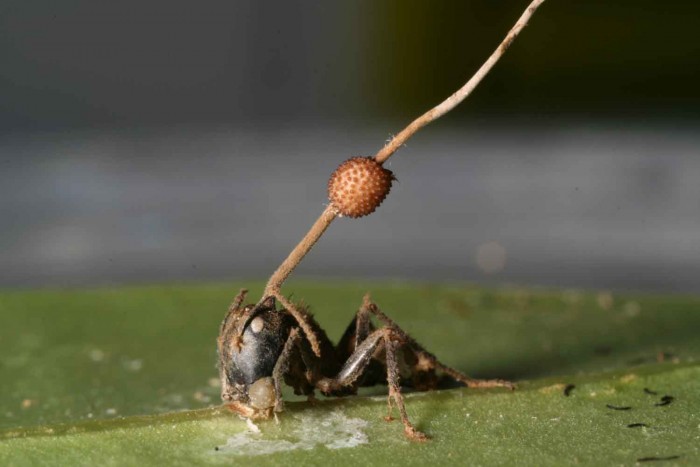 This photo shows the fungus “Ophiocordyceps unilateralis,” which looks like a stick with a ball in the middle, coming out of the dead ant’s head. (Photo by David P. Hughes, University of Exeter, England)

Zombies have been part of popular culture for decades. The living dead rising and taking over the world is a terrifying concept, worthy of Hollywood blockbusters and television hits. But even more terrifying is the fact that zombies actually exist in the natural world.

There are several species of ants known as “zombie ants,” one of which is targeted and infected by a parasitoid fungus called Ophiocordyceps unilateralis. This fungus takes over an ant’s brain and controls its actions so that it does what’s best for the fungus before it eventually kills the ant.

“Unlike parasites, like mosquitoes, which benefit by getting food or nutrients from a host without killing it, parasitoids eventually kill the host,” explains Conrad Labandeira, curator of fossil arthropods and a researcher at the Smithsonian’s National Museum of Natural History.

Here’s what happens:  An ant is going about its normal life, when suddenly the parasitoid fungus attacks the ant’s brain and essentially turns it into the walking dead.

“This type of fungus needs a particular ant as a host to complete its life cycle,” Labandeira says. “The fungus starts out as airborne spores. When a spore lands on an ant, it lodges itself into its head through an exposed part of the ant’s exoskeleton. The fungus then infiltrates and targets the ant’s brain, taking control of the ant in what’s called ‘zombification.’”

Once the fungus takes over the ant’s brain, it makes the ant leave its colony and head for a leaf that provides the ideal conditions for the fungus to grow. The ant crawls under the leaf and goes into a “death grip”—biting down very hard on the major veins of the leaf and eventually hangs attached to the leaf as a carcass.

“As the ant clenches to the underside of the leaf, the fungus slowly feeds on it. When the fungus finishes growing, it eventually kills the ant and releases its spores,” Labandeira says. 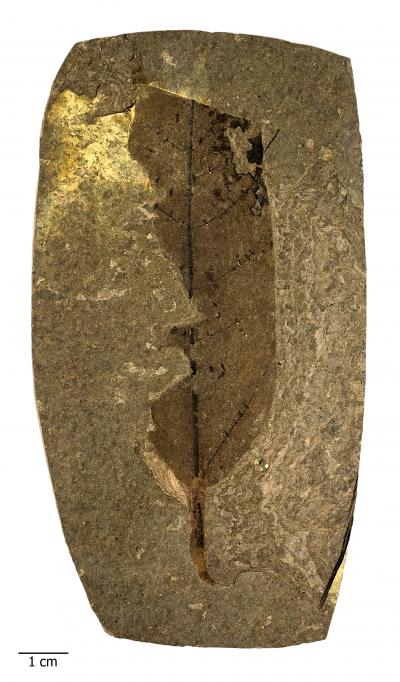 This 48-million-year-old leaf fossil from the Rhine Rift Valley in Hesse, Germany, clearly bears the tell-tale scars of ants that have been infected with the mind-controlling fungal parasite. (Photo by Torsten Wappler)

The real genius of the fungus’ attack is not only that it makes the ant go to a leaf that offers ideal shade and humidity levels for the fungus to grow, but that is also positioned directly on top of the ant’s colony, so when the spores burst out they fall on other ants and begin the cycle all over again.

There are hundreds of mind-controlling fungi like this one, most of which haven’t even been discovered yet, and scientists (including Labandeira) have been able to trace this fungus back 48 million years in the fossil record.

With so many mind-controlling parasitoids out there, is it possible one could target humans and turn us into zombies?

Labandeira assures that the chances of this type of parasitoid fungus eventually evolving to target humans as hosts are unlikely. So, no need to assemble a zombie apocalypse survival kit… for now.

Fungal fidelity: Some ants have been eating the same meal for 5 million years!

Take a walk on the wild side

Attack of the Killer Space Zombies from Mars

Going for the gut