When Charley Potter opened up a large box marked “Alaska Seafood: Keep Frozen” at the Smithsonian’s Museum Support Center, he wasn’t sure what to expect inside. Underneath layers of packing material was the cleaned skull of a beaked whale, carefully wrapped and sent to the Smithsonian’s National Museum of Natural History by the Aleut people that live on St. George Island, Alaska. Two of them, Hertha Kashaverof and Josh Prokopiof, investigated the whale’s massive body beached along the coast of their remote island earlier this summer. 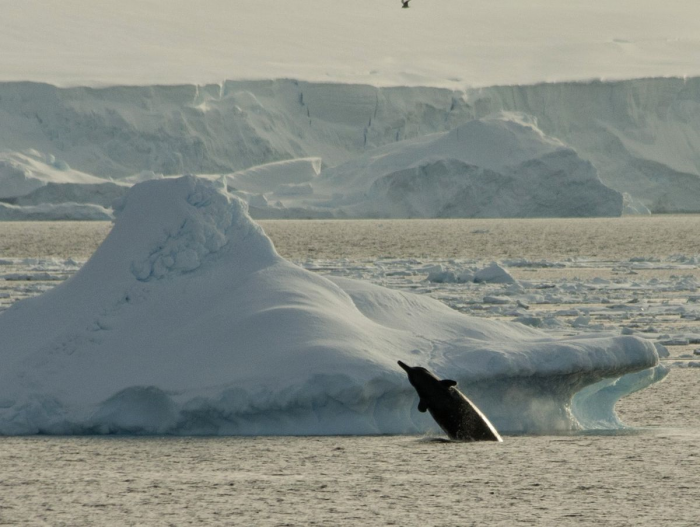 A beaked whale breaching in the icy waters off of Antarctica. (Image by Soler97, Wikimedia CC-by-NC-SA)

After DNA samples were collected and measurements taken, the skull was submerged for cleaning in the Bering Sea. A few months later, the St. George Tribal Government’s biology crew recovered the skull and shipped it to Potter and his team for scientific analysis with the hopes of solving an ongoing mystery about beaked whales. 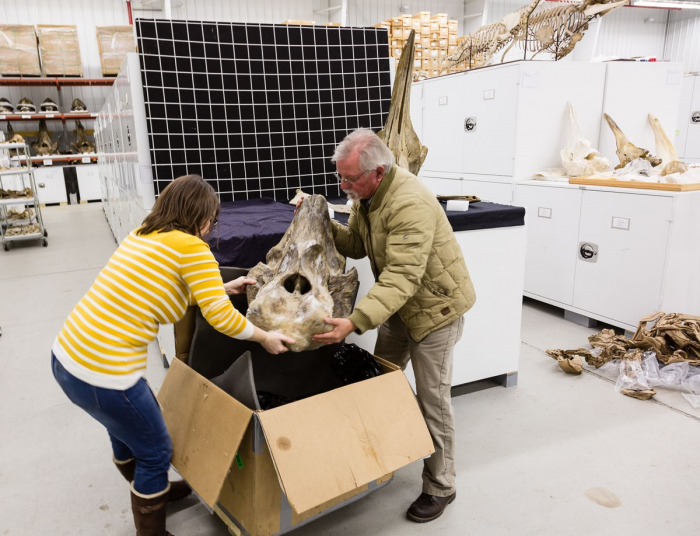 Beaked whales are kind of extreme. With their elongated faces, some of them look more like dolphins than whales, but all species are known for their impressive diving abilities. Scientists have recorded beaked whales 3,000 feet below the ocean’s surface, holding their breaths far longer than most other species- more than two hours at a time! They speculate that the whales primarily live in an underwater abyss, searching for other deep divers, like squid, to eat. This reclusive lifestyle makes beaked whales difficult to study, and little is known about their behaviors and life history.

Aside from their diving habits, beaked whales are known for their unusual dentition. Males have 1-2 pairs of teeth that protrude from their bottom jaws, kind of like boar tusks. In the marine world, this trait is unique to beaked whale species. Females may rely on the appearance of these teeth to find the right species of male during mating season.

Left: A tell-tale sign of a beaked whale: two tusks protruding from the lower jaw. Photo Credit: Smithsonian Institution. Right: Charley Potter and Nikki Vollmer hold the tusks of two Baird’s Beaked Whale specimens. The new skull representing the black species is on the right, and the gray species is on the left. (Photo by Donald E. Hurlbert)

Smithsonian collections manager Charley Potter and emeritus curator Jim Mead have been studying beaked whales for decades. One species, known as Baird’s Beaked Whale (Berardius bairdii), has long been though to exist in two shades: black and gray. However, new DNA research studies suggest that these color variations might actually represent different species! Potter and Mead are part of a team of scientists from NMNH, the National Marine Fisheries Service and National Museum of Nature and Science in Tokyo, Japan looking for clues to support this hypothesis.

In addition to genetic studies, the research team is relying on beaked whale specimens in museum collections to do morphological comparisons between the gray and black populations. The gray species is noticeably larger and found in the North Pacific and southern Bering Sea. The black species has primarily been found in pacific waters near northern Japan, although the new skull was located in Alaskan waters. With only a handful of examples of Baird’s Beaked Whale available in museums around the world, the skull from the Aleut people adds another piece to the puzzle that will help scientists better understand Baird’s Beaked Whales and how to protect them. 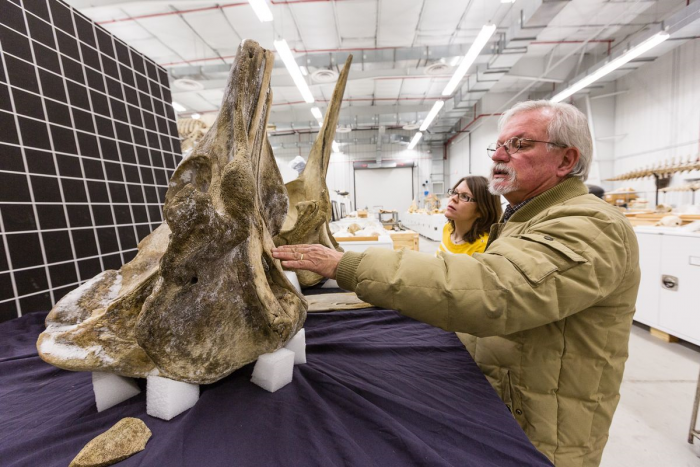 Charley Potter examines the skull of the black Baird’s Beaked Whale skull, which was shipped to the NMNH by the Aleut people of St. George Island, Alaska. The skull was so well packed that bits of ice remained on the surface. (Photo by Donald E. Hurlbert)

After examining the skull in person, Potter determined that it was likely from an older male belonging to the black subset of Baird’s Beaked Whale. It will temporarily join one other black specimen in NMNH’s collections, which was also obtained from Alaska in 1948.

NMNH would like to extend a special thanks to the Aleut leaders and members of the St. George Island community who recovered and sent the beaked whale skull to the Smithsonian for scientific study. Thanks also to Professor Kate Wynne, University of Alaska SeaGrant Marine Mammal Expert with the University of Alaska Fairbanks for coordinating logistics and networking communications about this specimen.

This post by Kathryn Sabella was originally published by the National Museum of Natural History blog, Unearthed

Long-beaked echidna may not be a thing of the past

About the Author: Katie Sabella

Katie Sabella is a press officer and science writer at the National Museum of Natural History. She first arrived at the museum in the summer of 2008 as an anthropology intern and has been hooked on learning about Smithsonian science ever since.