Ten years later, objects collected in the aftermath of Hurricane Katrina help personify the impact of that horrific natural disaster, Erin Blasco reflects on the experience of the late David Shayt, who traveled with photographer Hugh Talman to the Gulf Coast, and explains why he chose to preserve what he did. 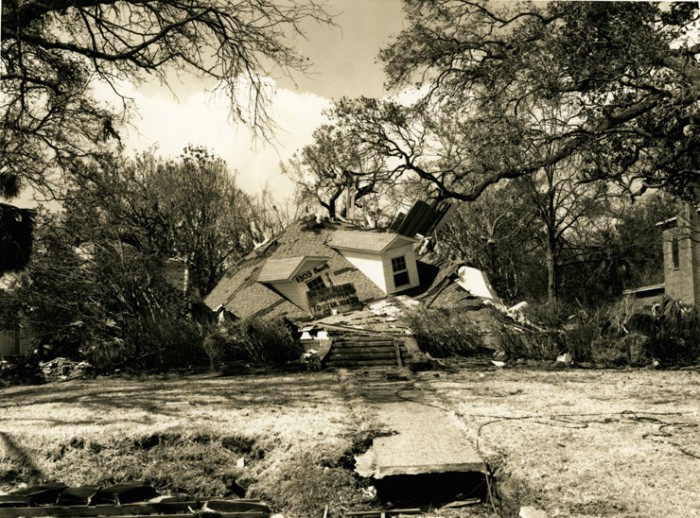 The late David Shayt (1952 – 2008) curator of the Work and Industry division of the National history Museum, once said, “All museum work in one form or another is digging in the dirt. We dig in the dirt of old factories to find old machines and blue prints. We dig in musty film vaults to find old films. . .It’s a process of digging, and searching, and looking for the unknown, the unexpected.”

When Hurricane Katrina hit the Gulf Coast in August 2005, Shayt said it was “a natural response for me to take interest. . .thinking about ways of preserving what quickly became a national tragedy─not just a local or regional event but one with truly national scope. And that’s why we got involved.” 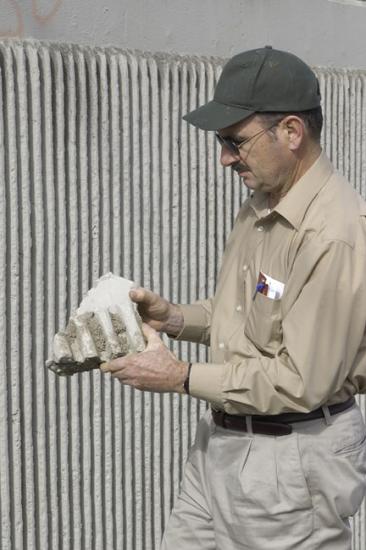 David Shayt with a fragment from a broken levee. (Photo by Hugh Talman)

As we look back on the tenth anniversary of the devastating hurricane, we revisit an interview with Shayt in which he talks about why and how the American History Museum responded and learn more about a few of the things Shayt and his team collected. (Listen here >>)

As a museum professional, I confess that I often think museums move a bit slowly, allowing historical legacies to develop before jumping to collect objects. But Shayt explained that the decision to send a team to collect in the wake of Katrina happened fairly quickly.

Collecting objects for posterity after a disaster is a specialized skill that requires not only fieldwork experience but sensitivity and tact. “I was selected in part because of my experience during the aftermath of September 11, 2001, when, due to my connections in New York City, I was part of a team that collected objects and artifacts from that experience. So I’d had some field work under my belt and knew in a sense what to expect. But we really hadn’t ever before, until now, collected a natural disaster.”

Shayt explained that his team decided to focus not just on New Orleans, but on the entire Gulf Coast area affected by the storm—a daunting task. “What was in our favor,” he said, “was the freshness of our response. We didn’t wait too long before buying plane tickets and renting a car in a fairly desolate airport in New Orleans to start making our way around. Right away, we found things and found people to talk to.”

One of the people the team met was Dr. Michael White, a local jazz performer, professor and a collector of clarinets. His house was flooded with nine feet of water. When he returned to it weeks later, he found a scene of devastation─his sheet music, records and clarinets caked with mud and mold. His belongings were in “a very soupy condition,” Shayt said. 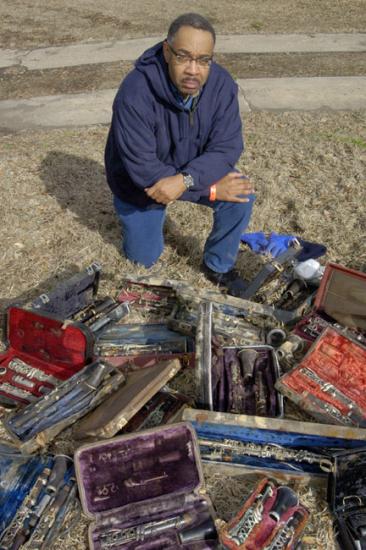 “In the process of meeting with [Dr. White],” Shayt said, “we actually helped him empty his house and hauled out, through a broken window, clarinet after clarinet after clarinet, in moldy, rotting cases. I selected one of those with his approval to add to the collections, a 1930s Pan American Special from Elkhart, Indiana—a metal clarinet, so it has held up pretty well. Its case, which I also collected, of blue velvet and wood, is in pretty shabby shape but I wanted that as well.”

Other objects the team collected also related to music history, including two photographs by jazz photographer Herman Leonard. “I met with Herman—and his studio, also flooded out, also a victim of great loss—and received from him a photo of Miles Davis and another one of Lena Horne,” Shayt said. “These were badly damaged in the flood but, because they were bubble wrapped, they floated for weeks on the flood waters in his studio, so they have this very interesting vignette of mold and growth coming in from the edges of these beautiful black-and-white prints inside their frames. So those, too, are an aspect of jazz and jazz history that are here at the Smithsonian.” 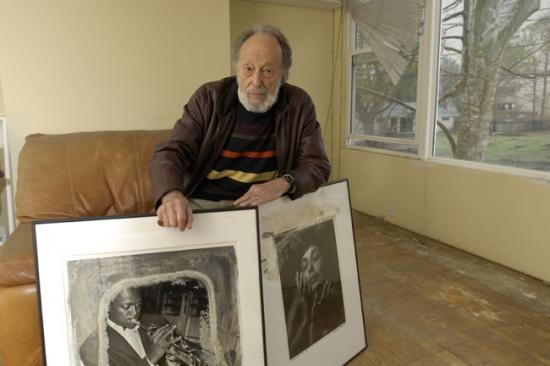 Shayt’s team also collected objects that reflect the experiences of everyday people affected by the storm, including signs along the evacuation route.

Those now in the collection include the familiar hurricane evacuation route signs, homemade cardboard signs thanking volunteers and rescuers, and many signs announcing business opportunities created by the storm, such as signs advertising “Get Rid of Your Katrina Water Stain,” house cleaning, junk removal or legal services. Shayt said these are “emblematic of the resilient American desire to make money, to have enterprise, even in a disaster zone like that.” 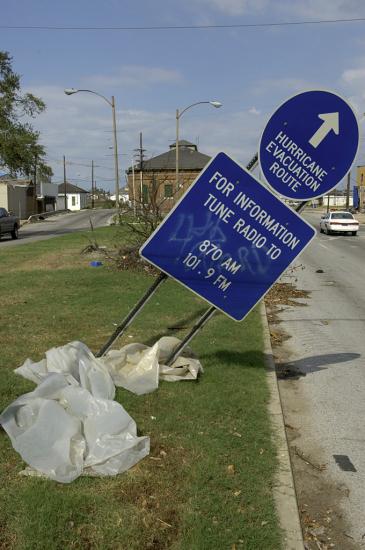 Shayt collected about 24 signs. This one is particularly heartbreaking. 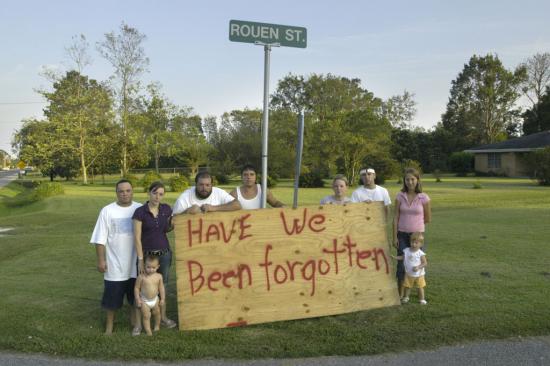 “One of the signs that we collected is a supplication,” Shayt said. “It says, ‘Have we been forgotten?’ [It’s] a large plywood sign from the outskirts of New Orleans people left by the side of the road as aid trucks zoomed by. I think signs like that and like the enterprising signs that offer services testify to this enduring American trust in one another, that somebody’s reading these signs, that there’s faith, there’s hope, there is a brighter future around the corner, if they can just get their message out.”

Learn more from photographer Hugh Talman as he talks about his experience photographing the aftermath of Katrina in this video produced for Smithsonian Folkways Magazine.

Erin Blasco is an education specialist in the American History Museum’s New Media Department. Other objects collected in the wake of Hurricane Katrina can be found in the museum’s online collections database.  A version of this post was originally published by American History’s blog, O Say Can You See?

Moments on the Metro: The Photographs of Hugh Talman

On the ground in Haiti