Home Art Take a trip to the Uncanny Valley

“Suspended Animation,” now on view at the Hirshhorn, is an unsettling journey into the digitization of the human experience. 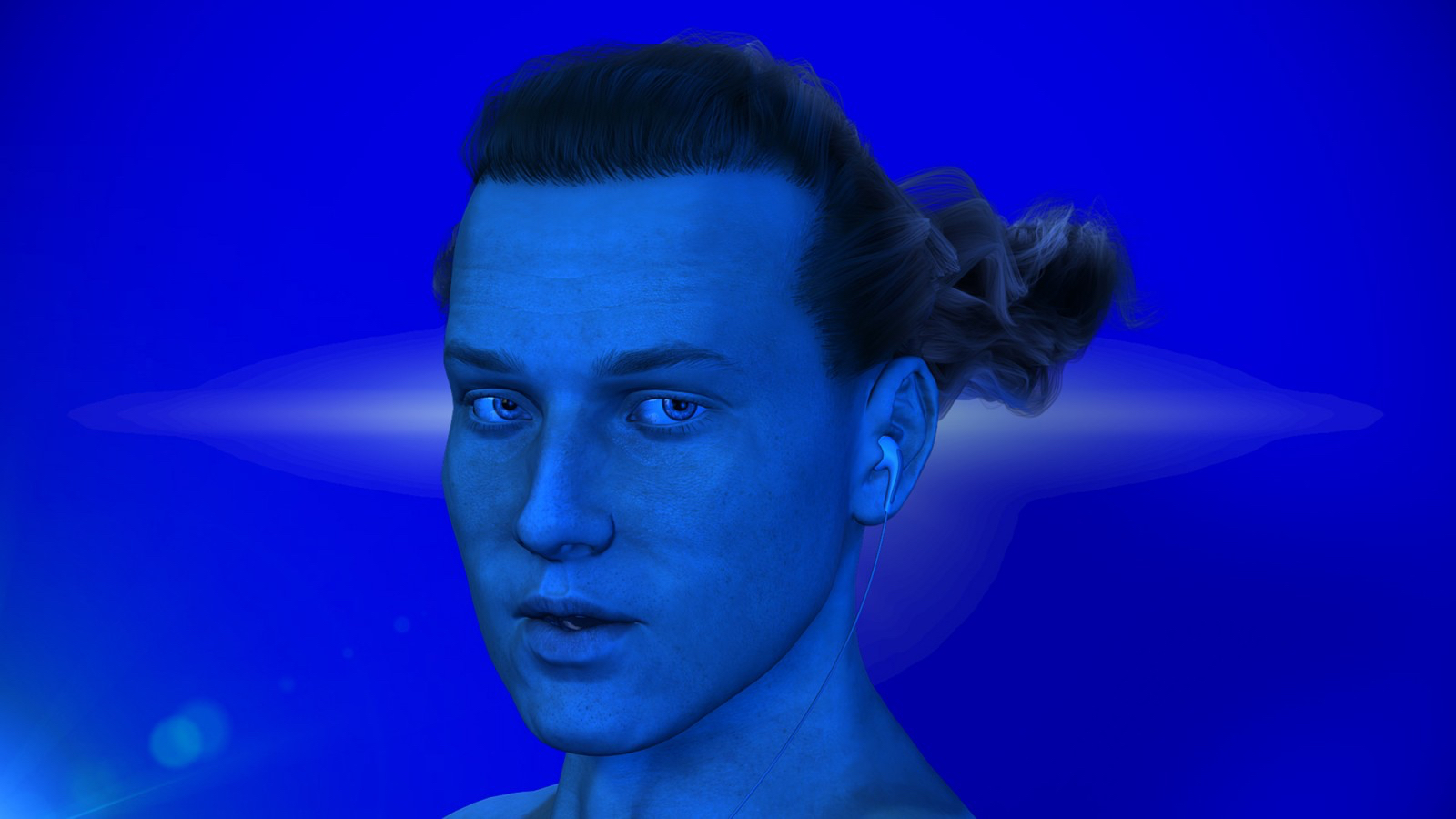 Compared with even just a few years ago, computer-generated images and animations are so commonplace today as to be almost unnoticeable. Digital people are everywhere: In cinema alone, motion capture technology is ubiquitous, using human movement but subtracting the human, preserving only human motion as a digital entity.

Surrounded by such artificial representations of humans as we are, the artists chosen for the Hirshhorn Museum and Sculpture Garden’s newest exhibit, “Suspended Animation,” collectively explore the limits of this artificial depiction, as well as questions that contemplate the role of the digital human in real life.

Traveling through the exhibit is an unsettling experience, by design. Each of the six artists in the show were chosen for their contributions to representations of the human body in the field of digital animation, says curator Gianni Jetzer.

“It is interesting how virtual reality is getting more and more important, while [for example] the authenticity of documentaries is often questioned, as many scenes are in a way staged,” Jetzer says. “Artists who work with new media are now fully part of the art scene. It no longer makes sense to keep them in separate shows.” 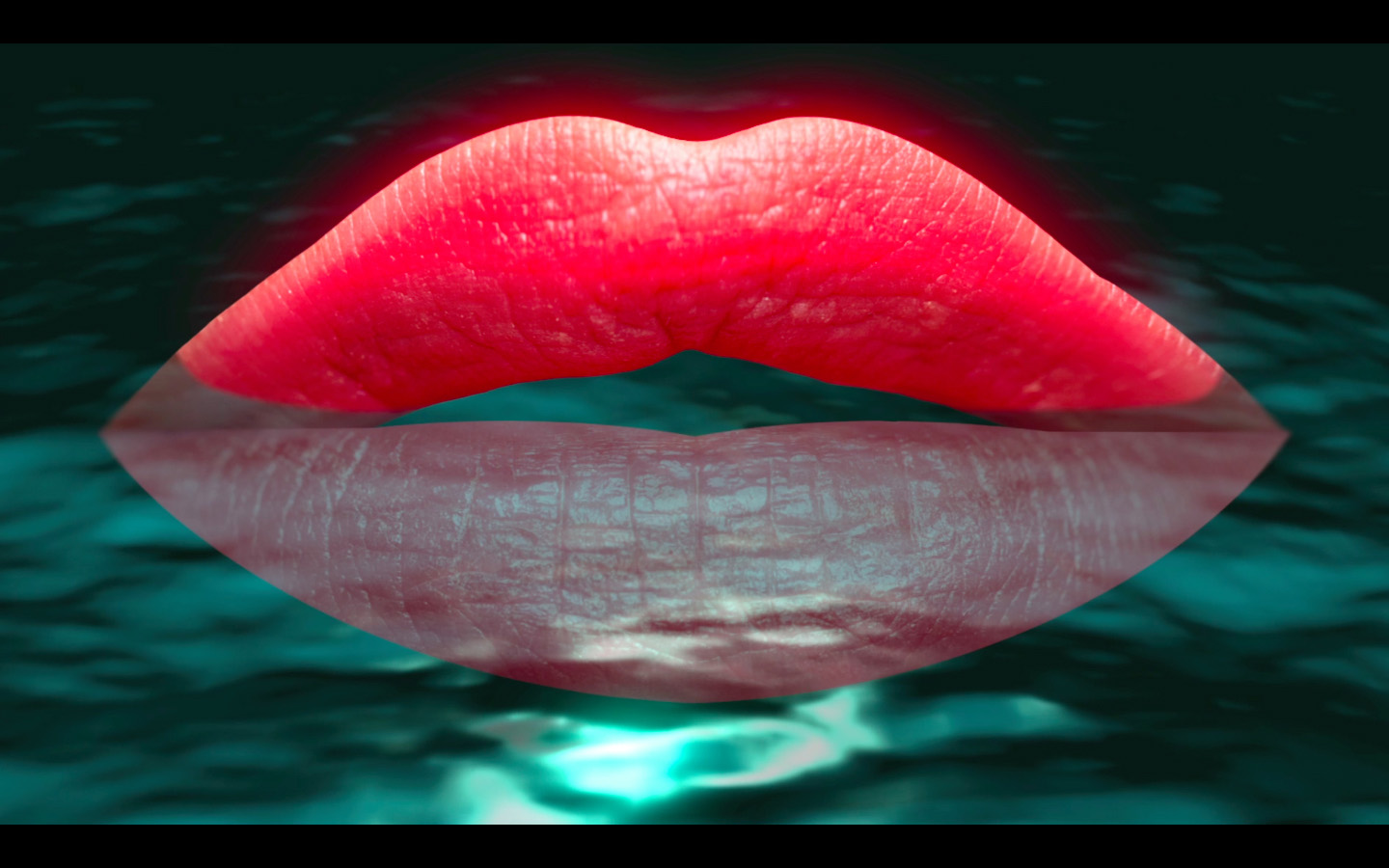 Agnieszka Polska
Still from “I Am the Mouth,” 2014
Courtesy of ŻAK | BRANICKA Gallery, Berlin

Unlike the conventional use of animation, which often approximates and mimics in a friendly, approachable way, the exhibit’s digital creations are uncomfortable. Each portion of “Suspended Animation”—the slowing of life processes via artificial means—uses digital creations to explore the digital disembodiment we experience on a daily basis, for example the disconnect of talking to friends in person versus text, e-mail and social media.

The journey begins with Polish artist ’s outsized, bodyless rouge-red lips, which drone out a monologue on the physical properties of sound. Next door, Helen Martin’s “Orchids, or a Hemispherical Bottom” reels through shapeshifting tableaus of objects that constantly refer to frogs and, perhaps, the metamorphosis of how thoughts become ideas.

Ed Atkins’ close-but-not-quite-believable male avatar in “Warm, Warm, Warm Spring Mouths” seems trapped inside his digital world, as well as inside a living person. As one watches the character agitate on the screen, sounds of breathing as if from inside a body emanate throughout the physical space. 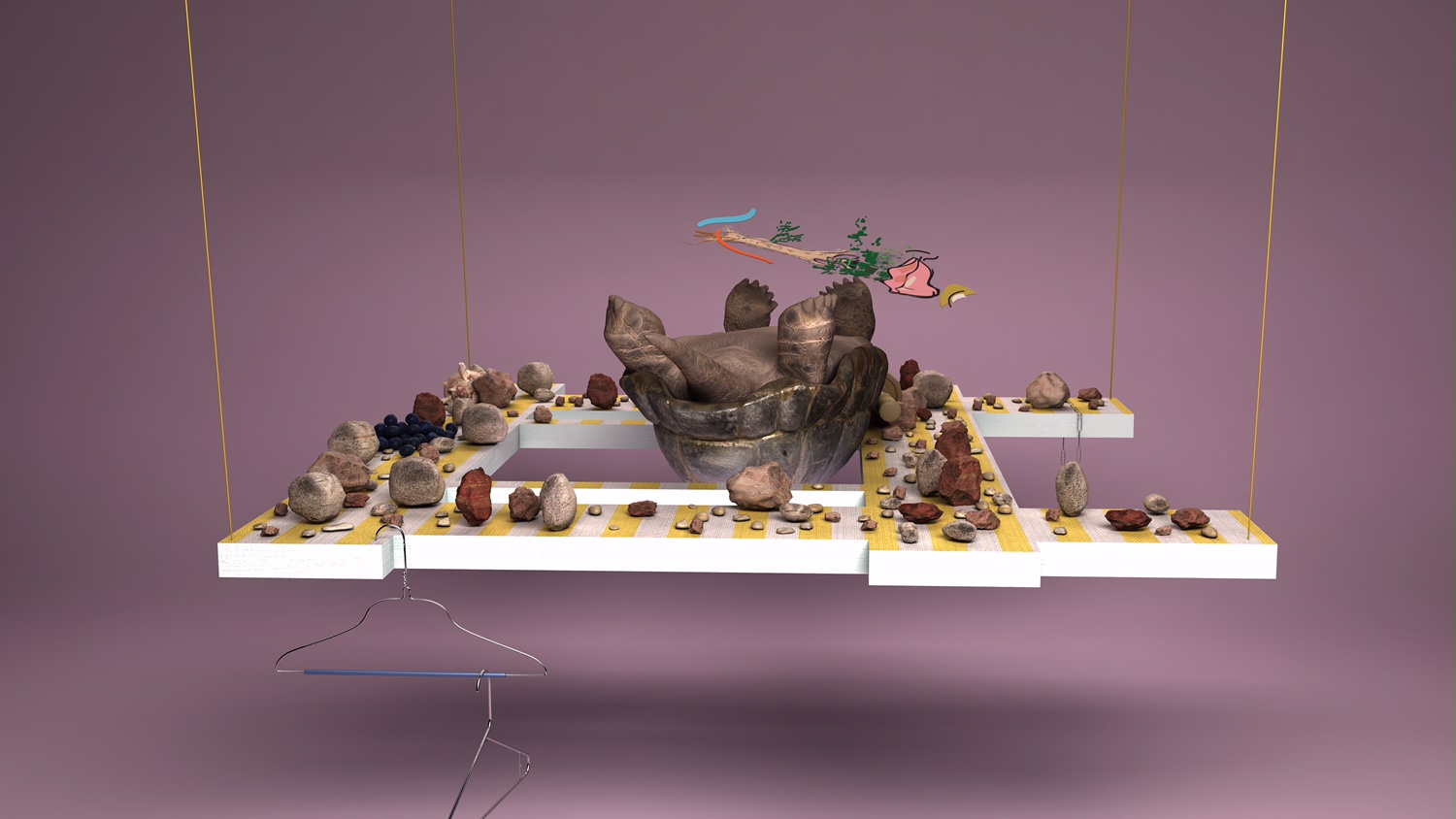 Next, Antoine Catala presents sadness as an emotion to be reacquainted with. She uses a subway-style advertising campaign from an imagined future where negative emotions have been abandoned. Teardrop shapes appear on a flexing, “breathing” video poster of perfect, weeping models—no ugly crying here—and an antiseptic hospital odor completes the notion that marketing can turn sadness into something desirable.

“With street advertising, you’re bombarded with images, and they have a big impact on society,” Catala says. “Digitization is transforming our language, the way we feel and talk. The way we comprehend the world around us is fundamentally changing.”

Though Catala was the only artist in the show to use video of real people versus computer simulations, his nod to the show’s theme is a subtly moving video screen membrane. “These images are breathing, with some kind of life support in them,” he says. 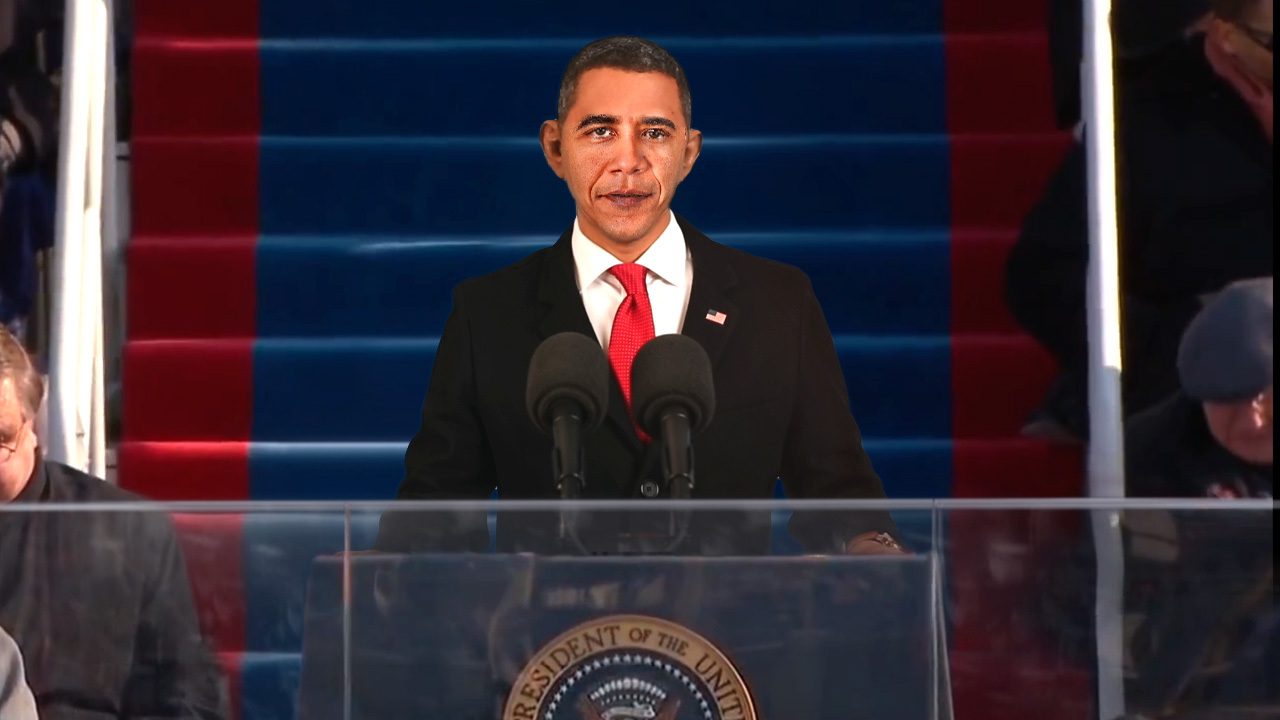 Josh Kline pastes President Barack Obama’s face on the body of an impersonator giving a reworked version of his 2008 inaugural speech. Obama’s features are distorted by the software used to accomplish the effect, and every so often the real actor’s eyes peek out, allowing the viewer to get a glimpse of the true face behind the impersonation.

Finally, Ian Cheng’s “Emissary in the Squat of Gods,” a virtual ecosystem seen from a distance above, shows primitive human-like figures scurrying, climbing and toiling against a volcanic backdrop. The action unfolds in real time, independently evolving to stresses that develop in the “game,” and explores the idea of humans’ ability to adapt to change.

Ian Cheng
Still from “Emissary in the Squat of Gods,” 2015
Courtesy of the artist and Pilar Corrias, London

“I would like to give the public the chance to see, think and feel around the complex questions that we face in regards of the digital representation of the human body,” Jetzer says. By questioning how humans relate to and possibly empathize with electronic beings, the show seeks to explore the limits of digital identity. “The tissue of reality is about to change. [The exhibition] is a challenging experience for sure,” he adds.

Digital representations of humans are only a natural evolution of the use of tools available to artists, Jetzer concludes. “We are living in the digital age. I am relieved that artists in 2016 not only paint but also use computers to make art. The larger portion of my day is spent in front of the computer screen—it reflects what I experience in my daily life.”

This post by Michelle Z.. Donohue was originally published by Smithsonian Insider.

Art in the Digital Age