For a millennial. 40 years must seem like an eon, while for someone nearing retirement, it seems like the blink of an eye. Staff from the Air and Space Museum reflect on the past four decades: what’s changed, what hasn’t and what’s on the horizon. 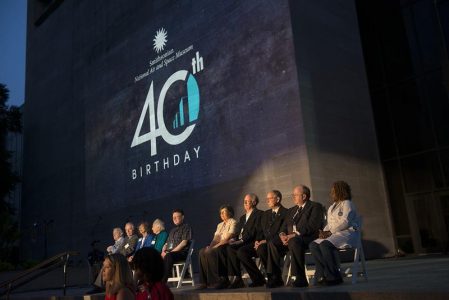 Staff and volunteers who have been at the National Air and Space Museum since it’s flagship building opened in 1976 are guests of honor at the 40th birthday celebration July 1, 2016.

What were you doing 40 years ago? For some of us, 1976 invokes the heyday of bellbottoms and granny glasses; for others, it seems as distant as the age of dinosaurs. For the National Air and Space Museum, July 1, 1976 marks the day the museum’s flagship building opened to the public, amid great fanfare and the excitement of NASA’s Viking Lander nearing Mars.

While they may no longer be wearing bellbottoms or granny glasses, nine members of the NASM staff who were there for opening day in 1976 are celebrating the museum’s 40th anniversary in 2016. We asked a few of them to share their memories of the past and their anticipation of the future as the Smithsonian’s most visited museum begins a new era. 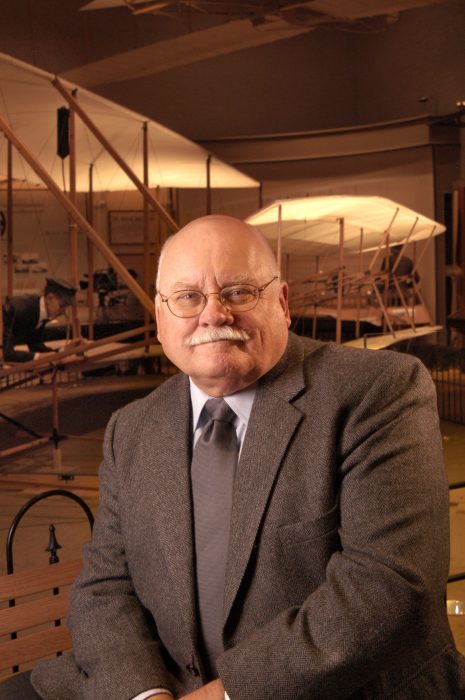 Tom Crouch is Senior Curator of the Division of Aeronautics at the NASM. Since 1974, he has served both NASM and the National Museum of American History in a variety of curatorial and administrative posts. Throughout his career, has also played a major role in planning exhibitions and managing museum collections. He was appointed chairman of the First Flight Centennial Federal Advisory Board, an organization created to advise the Centennial of Flight Commission on activities planned to commemorate the 100th anniversary of powered flight. He is now completing his latest book, Lighter than Air: A Concise History of Balloons and Airships. 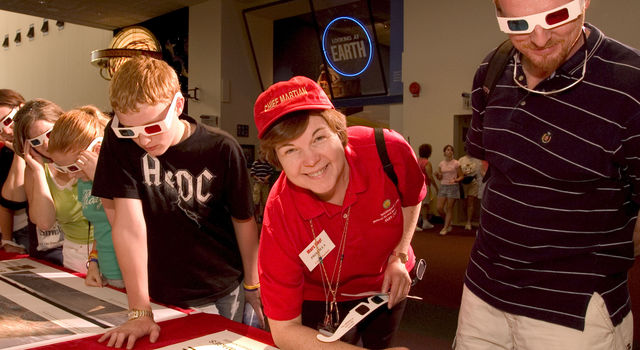 Pris Strain with visitors to the Looking at Earth exhibition at the National Air and Space Museum.

Pris Strain first joined the Air and Space Museum in 1974 to work under a NASA grant to study the photography of the Moon collected by the Apollo missions. At the completion of these studies, she undertook the development of the Looking at Earth exhibition, a major gallery devoted to the history and science of aerial and orbital imagery of the Earth. During her career at NASM, she has conducted research in the fields of lunar and terrestrial remote sensing. She is currently the curator of the museum’s lunar rock collection and manages the exhibits and public programs of the Center for Earth & Planetary Studies. 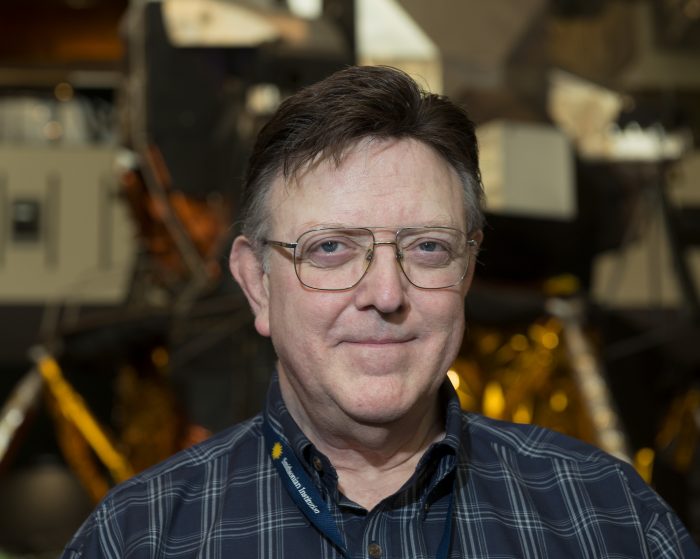 Phil Edwards at the 40th anniversary “All Night at the Museum” celebration July 1, 2016. (Photo by Mark Avino)

Phil Edwards began his career in 1973 with Smithsonian Libraries as the first Technical Information Specialist specializing in the field of aeronautical and aerospace history and technology. His daily priorities include assisting NASM curatorial and exhibits staff in their research on particular historical and technological matters, (including the very first exhibit designs for the flagship building from 1973 to 1976); documenting events and technological developments in the field of aeronautics and aerospace history; and researching specific engineering details involved in the restoration or preservation of aircraft, engines, spacecraft and flight equipment.

What is the biggest change to the National Air and Space Museum over the last 40 years?

Phil Edwards: The addition of the Air and Space Museum extension at the Steven F. Udvar-Hazy Center in Chantilly, VA. It has enabled NASM to greatly expand the display of the Museum’s vast collections, as well as provide optimal environmental conditions for their preservation. This outstanding extension of NASM provides the public yet another dynamic experience to further explore the historical and technical developments which have so notably advanced aviation and spaceflight.

Tom Crouch: Probably the biggest single change has been the improvement in the area of collections control and management. We do a much better job in that regard than was the case in 1976. 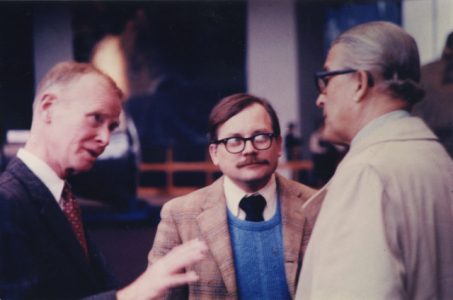 From left, Fred Durant, ASssociate Director for Aeronautics at the National Air and Space Museum, curator Tom Crouch and Werner von Braun, circa 1975.

Pris Strain: Today, we have so much great digital outreach, which is a wonderful way to reach a larger audience.

What do you think the museum will be like in 40 years?

TC: That depends on the result of our current effort to transform the Air and Space Museum by preparing completely new exhibitions. (Ed. note: The museum’s anniversary coincided with the opening of the newly refurbished Boeing Milestones of Flight Hall, featuring exciting new exhibits and an interactive media wall that allows visitors to curate their own experience.)

PE: The National Mall Building will be improved during its upcoming revitalization and from the plans I have seen, the exhibits will be better than ever. I would expect the Steven F. Udvar-Hazy Center to expand its magnificent facilities over the years to come as there is still so much more for NASM to do to present the development and history of aeronautical and aerospace science and technology. 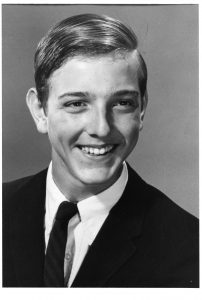 What is something in the museum now you would not have expected 40 years ago?

PE: The diverse array of first-generation Unmanned Aerial Vehicles (UVAs) that were added to the NASM collection in the 21st Century. The great potential and rapid expansion of this dynamic new field of aviation suggests to me that our visitors in future decades will likely see numerous other select historic examples of this technology exhibited by the Smithsonian at both facilities of the National Air and Space Museum.

TC: I am a bit surprised to find that I am still here!

PS: I think actually what is unexpected to me is what we don’t have in the Museum.  Nearly 50 years after the Apollo missions, I’m surprised and disappointed that we have never gone back to the Moon. I would have hoped we would have objects in our collection now representing further human explorations of the Moon or Mars.

Do you have a favorite memory from the the last 40 years at NASM?

PE: My years of friendship with and work alongside Paul Edward Garber, the man most responsible for establishing the Smithsonian’s National Aeronautical Collection and what became the foundation of the National Air and Space Museum will always be my fondest memory of my time at NASM. 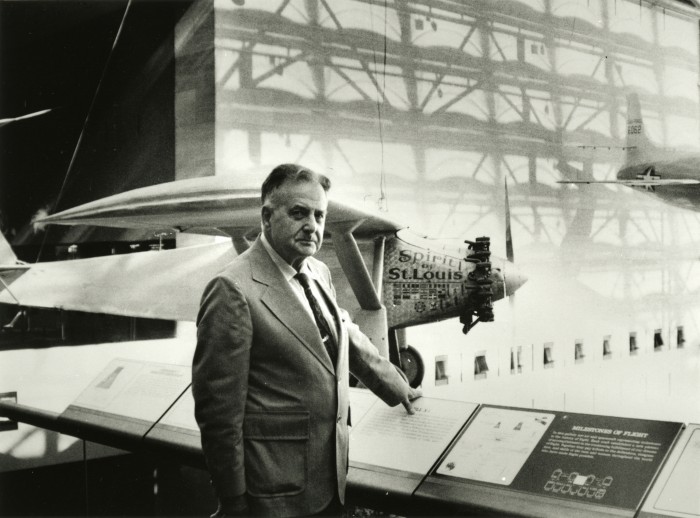 TC: The friends and colleagues I have made over the years.

PS: There have been many memorable moments, especially working with such great people, but I think my favorite may be the day my name was put on the Moon (sort of.)  Farouk El-Baz, the founding director of the Museum’s Center for Earth and Planetary Studies, was on the Working Group for Planetary System Nomenclature of the International Astronomical Union.  The great photography from the Apollo 15, 16, and 17 mapping and panoramic cameras was being used to make detailed topographic photomaps of areas of the Moon. The features on these maps needed to be given names approved by the IAU, so that scientists and others all over the world would have a consistent nomenclature system–there wouldn’t be any confusion if different scientists were studying the same feature. In most cases, lunar features were to be named after deceased scientists, but on the special large-scale maps which zoomed in on small features, first names from different countries were used.  One day, I, along with two other young CEPS research assistants, Delia Warner and  Susan McLafferty, were watching as Farouk placed names on a map of a portion of Davy Catena, a long crater chain on the Moon. The next thing we knew, Susan, Delia, and Priscilla were on the Moon, and the names were later approved by the IAU!  So even though officially Priscilla crater is named after a generic Priscilla, it’s fun to know that it’s a little bit me!  Here’s the map:  http://www.lpi.usra.edu/resources/mapcatalog/topophoto/77D1S1/ 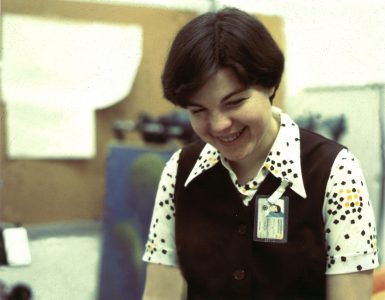 What would you give as a birthday gift to this museum?

PE: I have long been determined to establish within the museum’s research complex the Aerospace Legacy Materials special collections that Smithsonian Libraries has been building up over the past 40 years. This would provide the National Air and Space Museum an additional world-class library resource of unique historical professional literature that would be commensurate with the museum’s leadership role in promoting and supporting the study of aerospace history and technology.

TC: I would simply hope that the next 40 years will be as successful as the last 40.

What artifact do you think will be the most iconic 40 years from now?

All: The Wright Flyer! 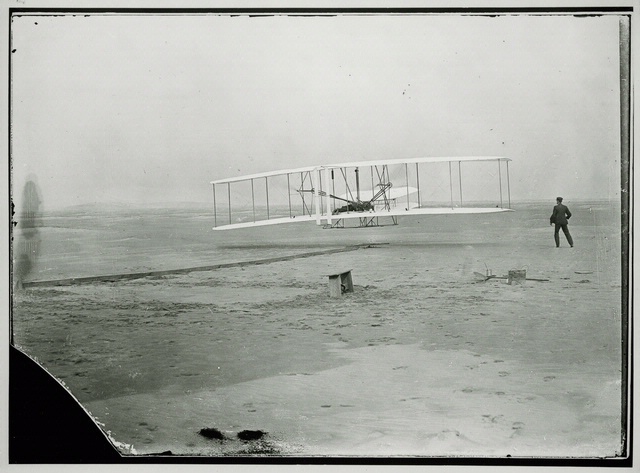 With Orville Wright at the controls and Wilbur Wright mid-stride, right, the 1903 Wright Flyer makes its first flight at Kitty Hawk, N.C., Dec. 17, 1903.

Will there ever be a National Air and Space Museum on the moon? On Mars?

PS: Actually, we are already an interplanetary museum. Back in the 1980s, NASA transferred ownership of the Viking 1 Lander on Mars to the Smithsonian.

The ultimate Smithsonian Traveling Exhibition? Viking 1 Lander image of Chryse Planitia on Mars. Chryse Planitia is a wide, low plain covered with large rocks and loose sand and dust. The image was taken on 30 August 1976, a little over a month after landing. (NASA photo)

Check out how the Torch covered the Museum’s original opening in 1976: Step into our Wayback Machine.

After 40 years in flight, the Air and Space Museum is soaring into the future

About the Author: Max Kibblewhite

Max Kibblewhite is a recent graduate of George Mason University and serial Smithsonian intern. When not writing for the Torch or volunteering at the National Air and Space Museum, Max enjoys weird art, indie music and very short walks on the beach.