Bob Hoover, a World War II fighter pilot who escaped a POW camp and flew to freedom by stealing a German airplane and who spent decades testing aircraft, thrilling spectators at air shows and training military aviators, died Oct. 25 at a hospital in Torrance, Calif. He was 94.

In 1947, Mr. Hoover was a test pilot flying alongside Chuck Yeager when Yeager broke the sound barrier. Mr. Hoover taught dive-bombing maneuvers to Air Force pilots during the Korean War.

He flew more than 300 varieties of airplanes and knew virtually every significant figure in the history of aviation, from Orville Wright to Charles Lindbergh to Neil Armstrong, the first astronaut to walk on the moon. During his decades as a stunt pilot, Mr. Hoover handled his plane so smoothly that he could pour a cup of tea while executing a ­360-degree roll. One of the airplanes he used for aerobatics, a North American Rockwell Shrike Commander 500S, is housed in the National Air and Space Museum’s Steven F. ­Udvar-Hazy Center in Chantilly, Va. (Read Mr. Hoover’s complete obituary.) 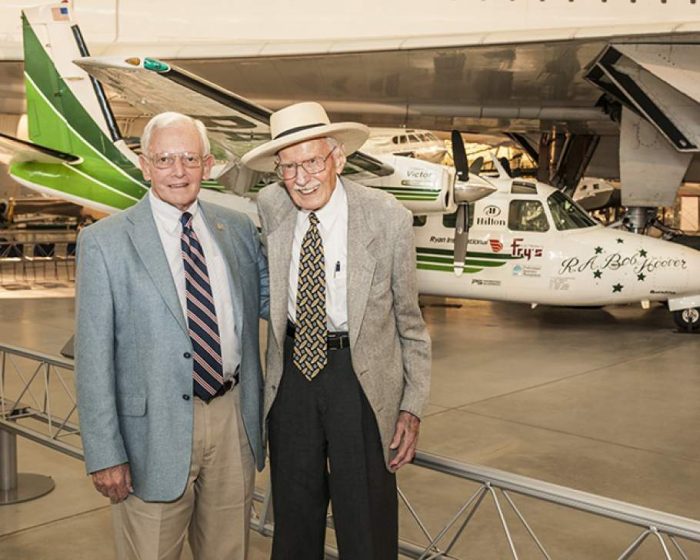 Bob Hoover passed away yesterday, after a lifetime of adventures rivaling any work of fact or fiction. Bob was an aviation legend, a role-model to generations of pilots, a friend to this Museum, and a gentleman to all who knew him. With the rest of the aviation community, we mourn the passing of the man Jimmy Doolittle called “the greatest stick and rudder man who ever lived.”

In the coming days, people all over the world will celebrate his life by trading their favorite Bob Hoover stories. There was the time he escaped from a prisoner-of-war camp by stealing a Nazi fighter plane. Or the one about flying an out-of-control F-86 for a full 40 minutes before returning it safely to the Earth. Or the impromptu air show over Moscow in 1966 that landed him in the custody of the KGB, only to be saved by the intervention of fellow pilot and first man in space Yuri Gagarin.

My favorite Bob Hoover story goes like this: Bob’s famous Shrike Commander, which thrilled crowds at airshows for more than 20 years, has a place of honor at our Steven F. Udvar-Hazy Center, alongside the SR-71 Blackbird and Space Shuttle Discovery. The day it arrived, Bob performed a fly-by of our Donald D. Engen Observation Tower, then landed and taxied over to where we were waiting. But he kept taxing straight past us and into the hangar. We tried our best to stop him, throwing chocks and everything else we could think of, but he was giving us his airplane and by God, we got it. Bob remains the only pilot to ever taxi his aircraft directly into the Boeing Aviation Hangar, and we intend for that record to stand forever.

Bob’s talent, discovered early and perfected over a lifetime, changed the face of aviation. He was a fighter pilot, test pilot, aerobat, air racer, and barnstormer. Although he is well known for his daring aerial maneuvers, Bob’s work in the field of air safety cannot be understated. He advanced new safety technologies and techniques, and mentored generations of pilots on what to do when seconds count and lives are at stake. In more than six decades in the air, there isn’t a facet of aeronautics he didn’t touch, and every modern pilot and passenger is indebted to his hard work.

One of Bob’s favorite pieces of advice for new pilots was this: When faced with a forced landing, fly the airplane as far through the crash as possible. That’s good advice. The loss of our friend is hard, but he would have advised us to fly through the hardship. We can do that by honoring a life well-lived. The first century of aviation changed the world in great and profound ways. Bob lived as much of that history as any one person is allowed, and had a wonderful time along the way. The legacy of Bob Hoover, the pilot’s pilot, will live on forever in this Museum.

Character, courage and “The Spirit of Columbus”

A few of my favorite things: Robert McKinney

“Become a Pilot” without all that tedious flight school