What do a feathered dinosaur, a 500,000-gallon aquarium full of hammerhead sharks and the supersonic Northrup F-5B Freedom Fighter have in common? They’re all part of the experience at a spectacular new museum in Miami. 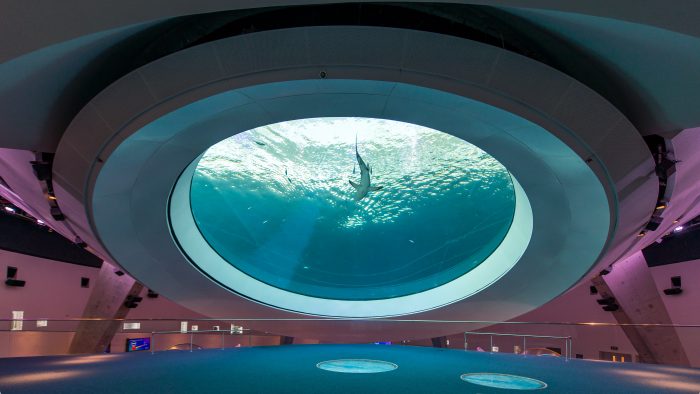 The Gulf Stream Aquarium Occulus at the Patricia and Philip Frost Museum of Science in Miami, Fla. (Photo by Ra Haus)

The Phillip and Patricia Frost Museum of Science, which officially opened at its new home in Downtown Miami’s Museum Park in May, is truly a marvel of both architectural and engineering feats. An affiliate of the Smithsonian Institution since 1998, the museum features a three-level 500,000-gallon cone-shaped Gulf Stream Aquarium teeming with hammerhead sharks and dolphins, anchored by a 31-foot oculus lens that peers into the waters above. The Frost Planetarium, one of the most advanced facilities of its kind anywhere in the world, uses a 16-million-color, 3-D 8K visual system to send visitors hurtling through space and into the depths of the ocean. And with a fascinating roster of interactive exhibitions, it’s easy to spend an entire day exploring and being immersed in the power of science. 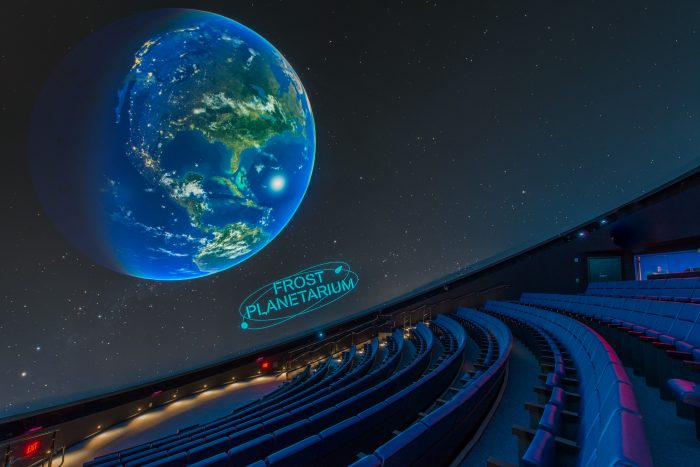 The interior of the state-of-the-art Frost Planetarium, (Photo by Ra Haus)

One of the new exhibitions, Feathers to the Stars, will carry you through the amazing story how ancient evolution gave birth to animal flight, and how humans used imagination and engineering to get airborne and explore the infinite possibilities of space. The exhibition also features a rocket engine, a rocket tail piece with jet deflector vanes, and a model of a V-2 missile (the world’s first guided missile), on loan from the Smithsonian Institution’s National Air and Space Museum, as well as the supersonic Northrup F-5B light fighter, on loan from the National Museum of the United States Aur Force . 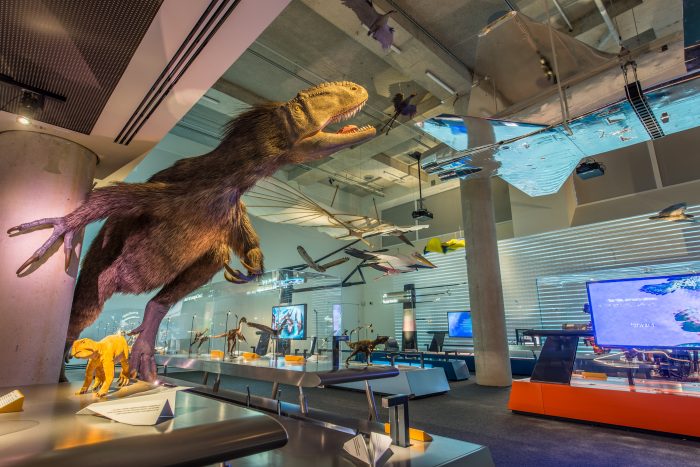 The “Feathers to the Stars” exhibition gallery at the Frost Museum of Science in Miami. (Photo by Ra Haus)

The F-5B may be faster than sound, but it’s no lightweight. What does it take to take suspend an 8,000-lb. aircraft high above the heads of gallery visitors? “Teamwork. Lots of it,” says Dr. Jorge Perez-Gallego, Curator of Astronomy and Exhibition Developer at Frost Science. “We enlisted the help of an invaluable group of experts, including first-class airplane movers and riggers. The aircraft was brought into the building in three pieces (the fuselage, the wings and the tail) through a tight opening between the Frost Planetarium and the level three terraces. The intricate task took our crew 10 hours from beginning to end.” 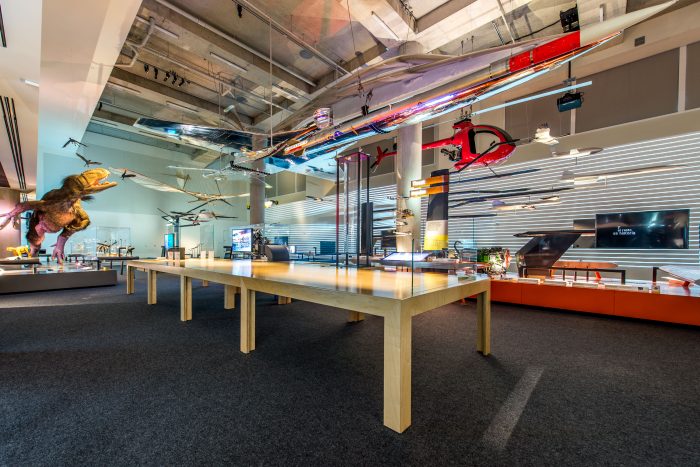 The Northrup F-5B Freedom Fighter, on display at the Phillip and Patricia Frost Museum of Science in Miami. (Photo by Ra Haus)

The Frost Museum of Science is just one of the amazing organizations in the Smithsonian’s network of 216 Affiliates in 46 states, Puerto Rico and Panama.

Smithsonian scholars receive a warm welcome at the Frost Museum

About the Author: Elizabeth Bugbee