Home Science Air and Space Museum ICYMI: Highlights from the week that was July 16 – July 22, 2017

This week, we pondered the cost of art: Who pays? How much is too much? Who owns a culture’s heritage? How much should a bag of dust cost?

Who Gets to Own Iraq’s Religious Heritage?

An archeologist on cultural preservation in the shadow of ISIS 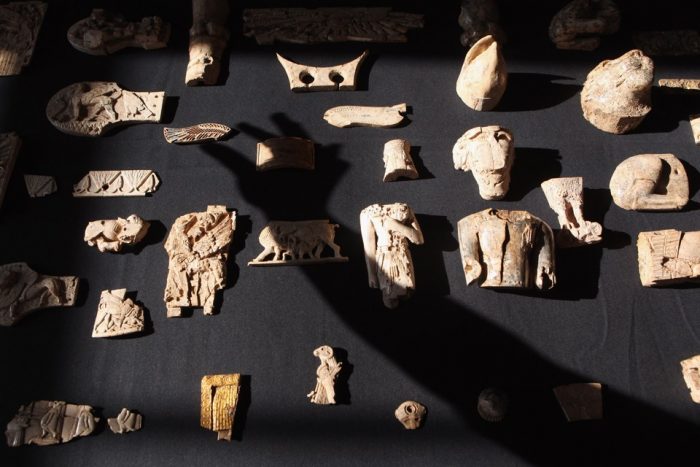 A technician at the British Museum casts a shadow over carved ivory artifacts from Nimrud, Iraq. (Oli Scarff / Getty)

The revelation that Hobby Lobby bought thousands of ancient artifacts smuggled out of Iraq provoked astonishment and anger. The craft-supply chain has agreed to pay a $3 million settlement and forfeit the cuneiform tablets and clay bullae to the U.S. government. But the story doesn’t end there. “The government will post a notice online giving the artifacts’ owners 60 days to submit claims,” The New York Times reported. “After that, the Iraqi government can submit its own claim. The Justice Department will ultimately decide where the items go.”

Beneath this sensational story lies a deeper question about ownership. Although Hobby Lobby’s purchase of the artifacts predates the rise of the Islamic State, a fascination with Iraqi antiquities has been thrown into sharp relief by the battle against ISIS, which profits off the black market in pillaged goods. And now that the Iraqi prime minister has declared Mosul recaptured, the question arises: How will the ancient heritage sites in and around the city get rebuilt—and who gets to make those decisions? Read more from Sigal Samuel for The Atlantic. 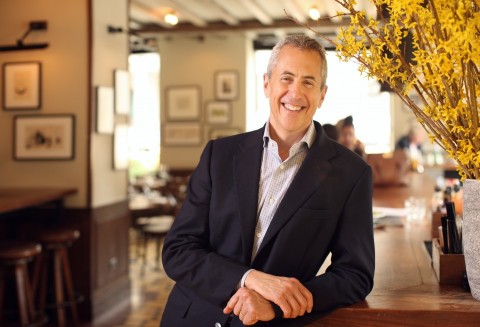 Julia Child taught restaurateur Danny Meyer one of the most important lessons he’s ever learned about hospitality. It was many years ago at the Union Square Cafe — he can’t recall exactly when — and he had received notice that she would be coming in for a celebration.

“Of course I spent the entire day, and day before, transfixed on what this experience would be like,” Meyer said. He put some of the late chef’s favorite dishes on the menus, and made sure they were freshly printed. When she came in with a group of 12 or so people, “Of course, the entire time she was there, I was obsessing over her table the entire meal.” Read more from Maura Judkis for The Washington Post.

At the Art Museum Ticket Office, How Much Is Too Much?

Or, the admission fee is too damn high 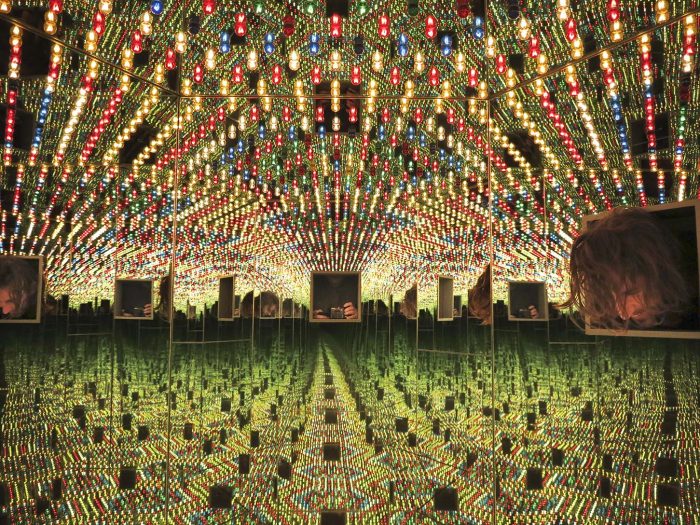 Eric Long’s camera is reflected as he take a picture inside one of Kusama’s Infinity Mirror rooms at the Hirshhorn. An unidentified man is reflected at right. (Photo by Eric Long)

Yesterday the Los Angeles Times delivered the news that the Broad museum in Los Angeles will release almost all of the tickets for its upcoming “Yayoi Kusama: Infinity Mirrors” exhibition—around 50,000 of them—at the same moment, on September 1 at 12:00 p.m. PT. That is a notable break from how many art museums have dealt with blockbuster shows: by having people line up and wait or by partitioning their tickets out daily in various ways. “It will be a matter of hours,” the Broad’s director, Joanne Heyler, told the Times. “There will be high demand.” Read more from Andrew Russeth for ARTNews.

Bad News for Life: TRAPPIST-1 Planets’ Atmospheres May Have Been Destroyed 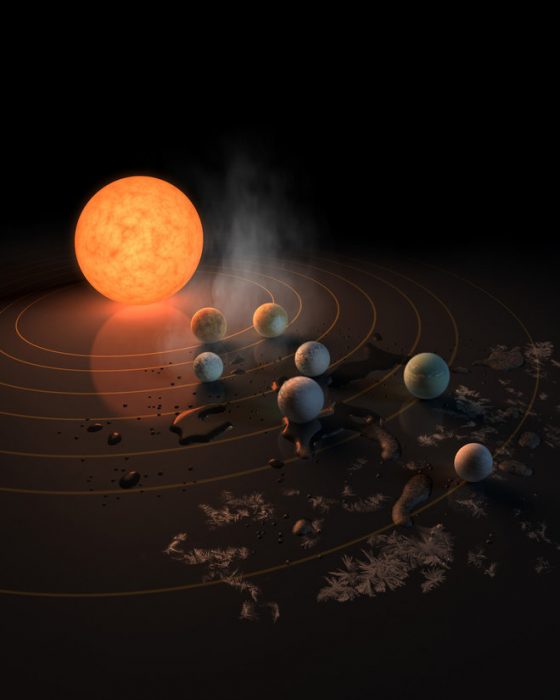 Two separate teams of scientists from the CfA have identified major challenges for the development of life in TRAPPIST-1. The TRAPPIST-1 system, depicted here in an artist’s conception, contains seven roughly Earth-sized planets orbiting a red dwarf, which is a faint, low-mass star. This star spins rapidly and generates energetic flares of ultraviolet radiation and a strong wind of particles. The research teams say the behavior of this red dwarf makes it much less likely than generally thought that the three planets orbiting well within the habitable zone could support life. (NASA/JPL-Caltech/R. Hurt)

The potentially Earth-like planets in the TRAPPIST-1 system may not be so conducive to life after all, two new studies report.

Intense radiation and particles streaming from their host star have likely taken a huge toll on all seven of these worlds, even the three that apparently lie within the “habitable zone,” where liquid water could theoretically exist on a planet’s surface, according to the new research. Read more from Mike Wall for Space.com. 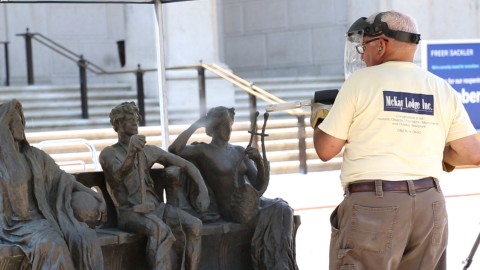 Science, Labor and Art had been living outdoors for more than a decade. They endured autumn rains and winter winds. In the springtime, pollen clung to their bodies and clothes. In the summer, beads of condensation streamed down the layer of wax that covers their motionless forms. Regardless of the season, uncouth humans touched them without permission. Occasionally, a bird pooped on one of their heads.

Such indignities are an occupational hazard of being a sculpture on display in a museum garden. The allegorical trio once graced the outdoor courtyard of the Smithsonian’s Freer Gallery of Art; a companion trio shows the embodiments of Love and Justice supporting a figure that represents Law. They were carved by Augustus Saint-Gaudens, the celebrated American artist, and the figures all wear slightly disdainful expressions, as though they know they were made by a master sculptor and are too good for these reduced circumstances. Read more from Sarah Kaplan for The Washington Post.

The Committee’s Interior and Environment Appropriations bill now goes before the Senate, where a final federal budget for 2018 will be hammered out in the coming months. 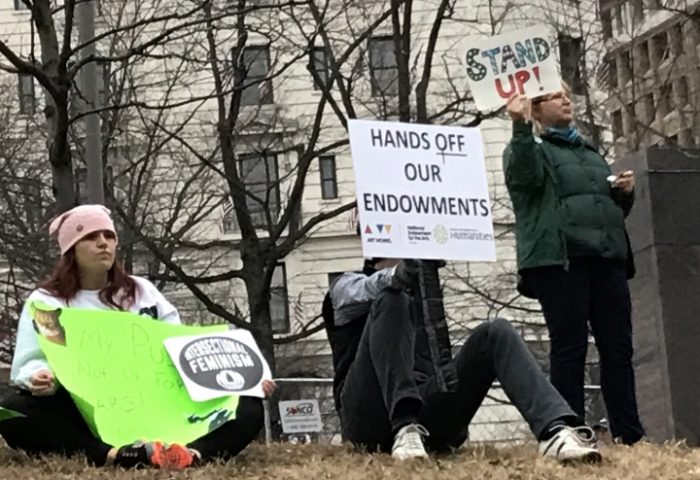 Last night, the Appropriations Committee of the US House of Representatives approved the Interior and Environment Appropriations bill for fiscal year 2018, earmarking $145 million each for the National Endowment for the Arts (NEA) and the National Endowment for the Humanities (NEH). While this represents potential cuts of nearly $5 million compared to the $149,849,000 both agencies received for FY2017, it’s also a far cry from the complete de-funding called for by President Trump in his proposed federal budget for next year. Read more from Benjamin Sutton for Hyperallergic. 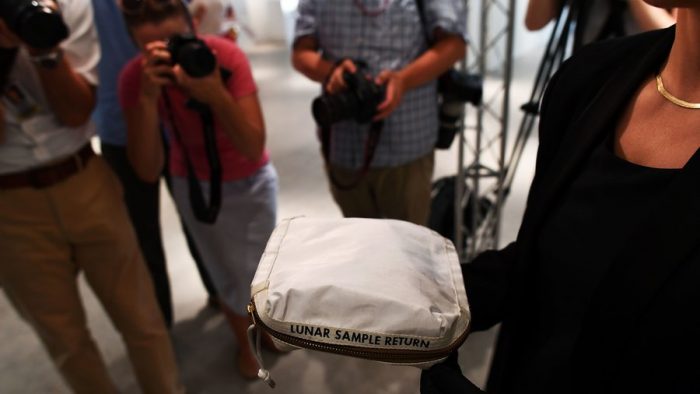 During a media preview on July 13, Cassandra Hatton of Sotheby’s displays the Apollo 11 contingency lunar sample return bag. It was used by Neil Armstrong on Apollo 11 to bring back the first pieces of the moon ever collected. (Jewel Samad/AFP/Getty Images )

A small, humble-looking bag received its moment in the spotlight today. It traveled to the moon and back, then sat forgotten in a museum basement. It was seized by officials who didn’t know its value, sold unceremoniously to a keen-eyed space enthusiast, then battled over in court.

Then the lunar collection bag from the Apollo 11 mission — and the tiny bits of moon dust embedded within it — hit the Sotheby’s auction block.

Nancy Carlson purchased the bag for less than $1,000. On Thursday, it sold for $1.5 million, or $1.8 million including the premium paid to Sotheby’s (lower than the $2 million plus that Sotheby’s had predicted). Read more from Camila Dononoske for NPR’s “The Two-Way.”