Dr. Uta C. Merzbach, the Smithsonian’s first curator of mathematical instruments, died suddenly on June 27, at her home in Georgetown, Texas.  She was born in Berlin, Germany, on February 9, 1933, the daughter of Margarete K. and Ludwig H. Merzbach. The family arrived in the United States as refugees in May 1946 having spent time in the Theresienstadt concentration camp until it was liberated on May 9, 1945, and in a displaced persons camp in Deggendorf in Bavaria. Shortly after their arrival in the US, they settled in Georgetown.  Merzbach’s parents both had doctorates from the university in Berlin and both had academic careers, her father mainly at Southwestern University in Georgetown.

Having attended high school for two years in Brownwood, Texas, Merzbach also studied for two years at Daniel Baker College of Southwestern University. She then attended the University of Texas in Austin, where she earned a bachelor’s degree in 1952 and a master’s degree in pure mathematics in January 1954, shortly before she turned 21. She taught for a short time at Radford School for Girls in El Paso, Texas, before entering Radcliffe College of Harvard University. She received her doctorate in mathematics and the history of science from Harvard in 1965. 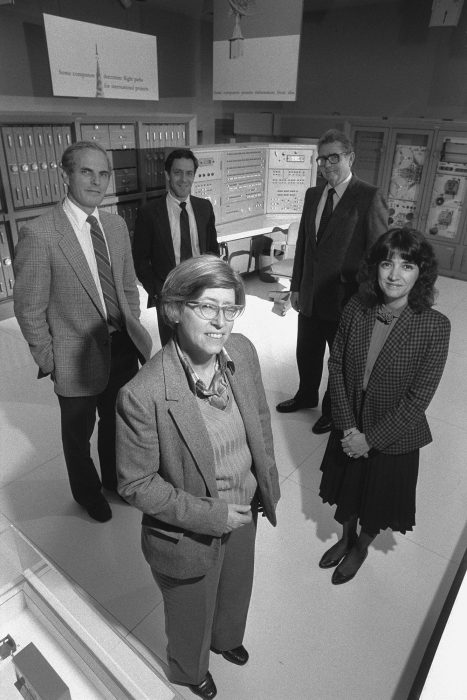 Merzbach contributed to many exhibitions, including “Information Revolution” at the National Museum of American History in 1985. Seen here (clockwise from left) are Barney Finn, Art Molella, Jon Ecklund, Marie Makurath, Uta Merzbach. (Photo by Arthur P. Molella, as featured in The Torch, December 1984)

From 1964 until 1988 she was Associate Curator and then Curator in the Division of Physical Sciences and Mathematics at what became the Smithsonian Institution’s National Museum of American History.

Merzbach was the Smithsonian’s first curator of mathematical instruments, hired at a time when the nation placed great emphasis on improving math and science education. The collections she acquired are international in scope, with a primary emphasis on objects made and used in the United States. They range in date from an 11th-century astrolabe made in Muslim Spain to early microcomputers. Some, such as the tabulating machine made by Hermann Hollerith for the U.S. Census of 1890, were made in the Washington, D.C. area. Others came from much farther away. A 17-century Portuguese mariner’s astrolabe, for example, was found in a shipwreck in Manila Bay in the Philippines. Manufacturers, universities, government agencies and numerous private individuals donated objects to the collection. Merzbach also curated exhibits on topics ranging from ancient mathematics to electronic computing to mathematical paintings.

In addition to her path-breaking work collecting and displaying mathematical objects, Merzbach made pioneering contributions to the compilation of oral histories for the history of computing, the use of computer interactives on the museum floor, and the effort to track museum objects with computerized databases.

Merzbach had the highest scholarly standards and was the author of a number of publications on the history of mathematics and of science, including Carl Friedrich Gauss: A Bibliography, Georg Scheutz and the First Printing Calculator, and major revisions of the popular A History of Mathematics by Carl B Boyer.  Her role as a mentor to others in the history of mathematics was significant, and led to talks, journal articles, and at least one monograph.  Although Washington, D.C., was her primary home, she also lived for some time in Essex, Mass., and Georgetown, where she was an active member of the local Democratic Party and a long-time member of the American Civil Liberties Union.  At the time of her death, Merzbach was completing an intellectual biography of the nineteenth-century German mathematician Peter Gustav Lejeune Dirichlet.

There are no immediate survivors.  Memorial contributions may be made to Southwestern University, 1001 E University Ave, Georgetown, TX 78626.