Home Feature Stories Travel through time with a whale detective

Science takes time, according to paleontologist detective Nick Pyenson, and we need science to understand the impact of its passage. 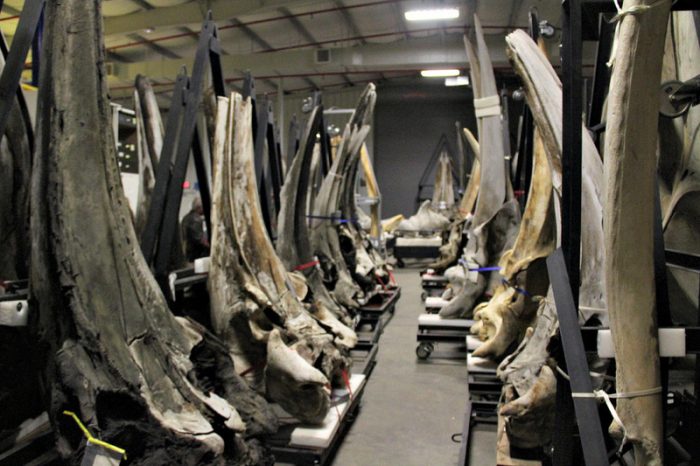 The largest collection of whale bones in the world is housed at the Smithsonian’s Museum Support Center in Suitland, Md.

In Suitland, Maryland a giant warehouse holds the largest collection of whale bones in the world.

Stacked from floor to ceiling are bones of sperm whales, gray whales, and the largest whales on Earth—blue whales, which can reach 380,000 pounds. Ancient whale fossils, tens of millions of years old, are also packed into the collection.

It’s the job of Nick Pyenson to try to figure out how these whales developed to what they are now. He sees himself as kind of a paleontologist detective. His more formal title is Curator of Fossil Marine Mammals for the Smithsonian National Museum of Natural History.

Madeline Sofia of National Public Radio sat down with him to find out what it’s like to be a scientist at the top of their field. Like all scientists, Pyenson is a focused on making sense of the world around him.

Here are some snippets from their conversation:

For me, I got interested in whales because I thought they were fantastic vehicles to understand evolution. I think that’s the job of any paleontologist, is trying to understand what happened in the history of life that we didn’t see. It’s a big detective story. With whales, we know how amazing they are in the modern world. How did that ever come to be? If you want to be able to answer that question, that is when you turn to the fossil record. So that’s what got me broadly interested in where whales came from.

What’s the most frustrating part of your job?

The most frustrating thing about my job is that there are not enough hours in the day. I have way too many questions and not enough time for me to do what I want to do. Science takes time. So I have to be choosey. And also being a steward of the legacies. That’s something that really weighs heavily on me. I want to make sure the collection is as good, if not better, than when I received it, as it would be for somebody maybe 200 years from now. I want to make sure someone I will never meet will look at the fossils that I brought in to the museum and say, “Yeah, Nick didn’t screw it up too badly, he did an okay job.”

What motivates you? When you wake up in the morning are you thinking whales?

First I need a coffee before I do anything else. I get up in the morning because I love what I do. It’s tremendously exhilarating and exciting to me, to be able to walk through museum collections. It’s basically like walking through time. You get to encounter the remains of past worlds that would seem so strange that you would think you’re on a different planet – but you’re not. You’re on planet earth, but at a different time in the geologic past. With different organisms—some of which are extinct, some of which are around today. And you’re charged with that detective story, trying to figure things out.

How would you describe yourself?

You can think of me as a marine mammal detective through geologic time. I look to the past to track down whale bones to understand how whales came to be and where they’re going.

Learn more and take a tour of the Whale Bone Warehouse.

The Mysterious Case of Cetacean Expiration