No matter where you are, you can experience the rare total eclipse of our local star in August with the help of a free app from the Smithsonian Astrophysical Observatory.

The Smithsonian Eclipse app (iTunes | Google Play) is your interactive guide to the 2017 Total Solar Eclipse on Monday, Aug. 21, when Americans will have a front row seat to a rare celestial event. 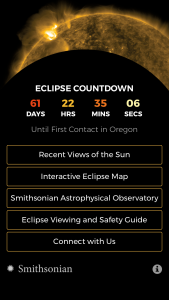 The free app, created with content from the Smithsonian Astrophysical Observatory, has a number of solar and eclipse-related features, including: 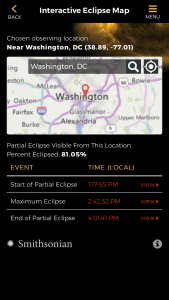 Since 1890, SAO has conducted solar research, including the study of solar radiation and the solar constant.

Today our telescopes and instruments send back high resolution images of the Sun and other data to study phenomena including how the solar atmosphere is energized, the topology of solar features, and space weather, to name just a few. During the 2017 solar eclipse, SAO’s AIR-Spec instrument will ride along a unique aircraft built for scientific research in order to measure plasma emission from the sun.

Our solar research is more than a century in the making, and we can’t wait to share it with you.

How do the first Americans view the Great American eclipse?