Home Science Air and Space Museum ICYMI: Highlights from the week that was August 27 – September 2, 2017

Killer ants, deadly weather and dollhouse death scenes–this week spoke to the screaming hairy armadillo in all of us.

Dollhouse death scenes are being refurbished for Smithsonian exhibit 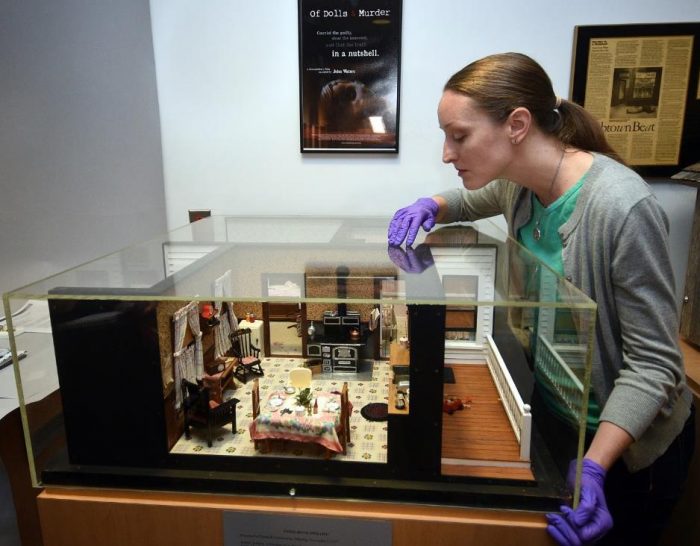 Using a tiny paintbrush, Ariel O’Connor carefully applied a compound to preserve the charred wall of a dollhouse featuring a grisly scene: The skull of a body lying in a bed inside peers out, beseeching the viewer to determine whether this was murder.The dollhouse is one in a series of model whodunits used to train generations of police detectives in crime scene investigation. It is being cleaned, repaired and stabilized to be showcased at the Smithsonian American Art Museum’s Renwick Gallery beginning in October. It is the first time the collection, built about 70 years ago, will be on public display. Read more from Yvonne Wenger for The Washington Post. 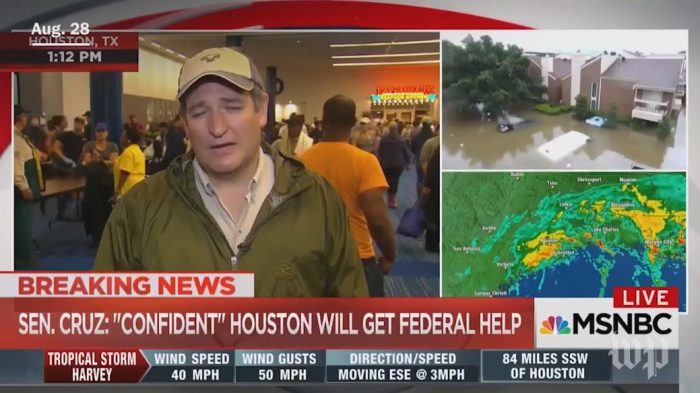 “The problem with that particular bill is it became a $50 billion bill that was filled with unrelated pork. Two-thirds of that bill had nothing to do with Sandy.”
— Sen. Ted Cruz (R-Tex.), interview with NBC’s Katy Tur, Aug. 28, 2017

Hypocrisy watch! Now that Houston and much of southeastern Texas is swamped by Hurricane Harvey, critics (including Northeastern lawmakers) have complained that Texas senators and members of Congress are seeking emergency federal aid but refused to back relief for the victims of Hurricane Sandy in 2012. Read more from Glenn Kessler for the Washington Post’s Fact Checker.

The Smithsonian Would Love to Get Its Hands on the Lindberghs’ Old Plane. But Its Owner Won’t Stop Flying It 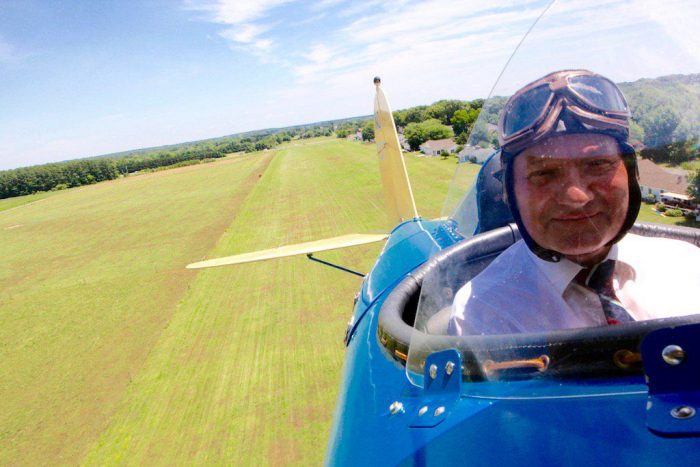 Mike Pangia with his Brunner-Winkle Bird. Photo by Evy Mages.

The airplane the Smithsonian can’t have taxis down a grass strip in Stevensville, Maryland, picking up enough speed to ease itself into the sky above Kent Island. It’s an uncommon plane: The Brunner-Winkle Aircraft Corporation built just 220 “Birds” in Brooklyn between 1928 and 1931, and perhaps 60 are still around. But that’s not why the “Nation’s Attic” would like to own this particular biplane. The real attraction is its first owner, who according to Civil Aeronautics Administration records was a Mrs. Charles A. Lindbergh of Englewood, New Jersey.

Anne Morrow Lindbergh’s famous husband bought the Bird to help her learn to fly. She eventually flew over five continents and spent nearly six months surveying Atlantic flight routes using other planes. But she learned in the Bird, which Charles Lindbergh ordered with a special low passenger seat in the front because he was so tall. Read more from Andrew Beaujon for Washingtonian. 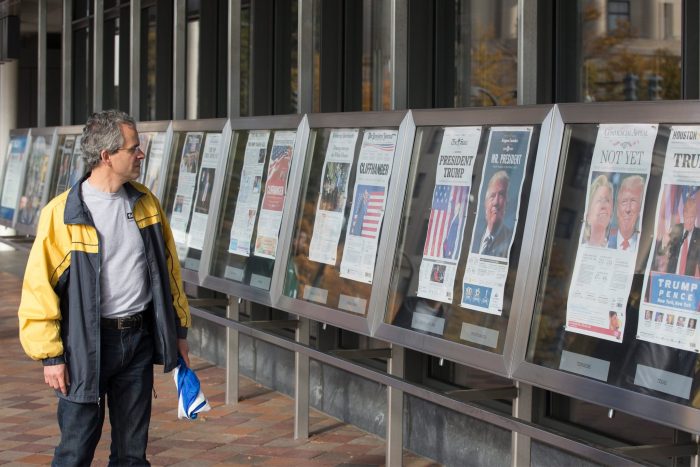 A display of newspaper front pages at the Newseum in November 2016. The museum has struggled financially. Credit Michael Reynolds/European Pressphoto Agency

Jeffrey Herbst, the president and chief executive of the Newseum in Washington, resigned on Monday, as the museum’s board announced a full review of its finances.

The Newseum, which seeks to educate visitors about the press, the First Amendment and the history of communication, has long struggled to find its footing financially. The museum has had four rounds of staff reductions since 2009, according to The Washington Post, most recently in January. In large part, the Newseum gets support from the Freedom Forum, a nonprofit that focuses on First Amendment advocacy and education. Read more from Sophie Haigney for The New York Times. 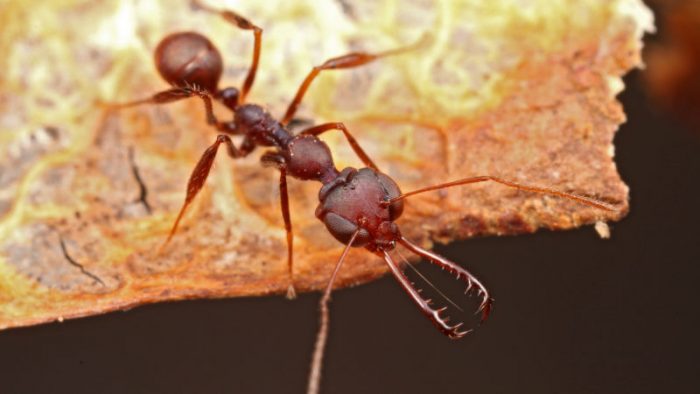 Below the tangle of vines and branches of the East Malaysian rainforest, a small contingent of ants scuttles frenetically along the shaded leaf litter. But these are no mere picnic pests—these are Myrmoteras trap-jaw ants, fearsome predators armed with long, spiky, widely-agape mandibles—and they are on the hunt. Suddenly, an insect-like springtail comes into the view of a trap-jaw’s compound eye. With a quick rush from the ant, it’s all over, and the springtail is pitifully pinned in the ant’s prickly jaws.

You’d be forgiven for missing the action, considering that Myrmoteras ants snap their jaws shut ridiculously quickly, too fast for your eyes and brain to register the movement. Now, new research published in the Journal of Experimental Biology has determined how the trap-jaw ants pull off this athletic feat, revealing that the fastest mouth in the jungle is nothing short of a marvel of evolutionary technology. Read more from Jake Buehler for Gizmodo. 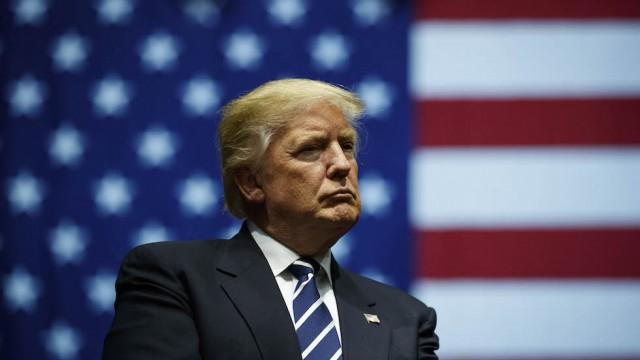 “The President intends to appoint Frederic Malek of Virginia to be a Member of the Board of Trustees of the Woodrow Wilson International Center for Scholars in the Smithsonian Institution and to designate him as Chair,” the White House said in a statement Wednesday announcing the decision. Read more from Mallory Shelbourne for The Hill.

Things to Think About When Taking Down Statues 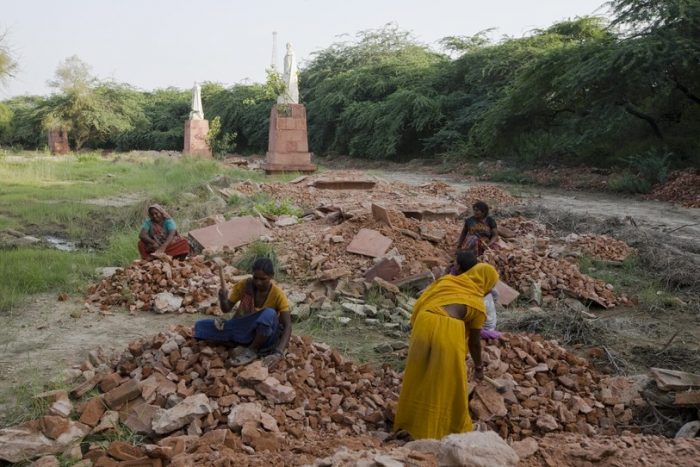 In New Delhi’s Coronation Park, painful symbols of British imperial rule have been collected and contextualized in a way that has allowed their potency to dissolve.
Photograph by Stuart Freedman / In Pictures Ltd. / Corbis via Getty

oronation Park lies to the north of old Delhi, in a jumbled neighborhood of residences, highway overpasses, and small businesses. Power lines and cell-phone towers rise on the horizon. Between 1877 and 1911, however, imperial Britain staged several Durbars, or royal celebrations, on the park’s flat expanse. British and European diplomats gathered in tented encampments; Indian rajahs and subjects came to bend their knees to Westminster.

The most significant Durbar took place in 1911, when King George V arrived to introduce himself as the Emperor of India and to lay the foundation stone for a new capital, New Delhi, which would succeed Calcutta as the Empire’s seat of government on the subcontinent. Edwin Lutyens, the British architect, embarked on the design of the city, conceiving the grand mall that runs from India Gate past the red sandstone secretariats known as North and South Block to Viceroy House, now renamed Rashtrapati Bhavan—President’s House. Read more from Steve Coll for The New Yorker.

The National Zoo Is Now Home to Two Screaming Hairy Armadillos, Possibly the Best-Named Species Ever 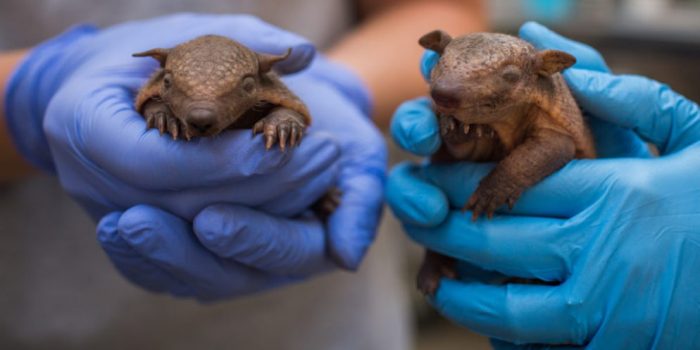 Need a break? Yeah you do. So meet the Smithsonian National Zoo’s first-ever screaming hairy armadillos, a pair of pups who instantly vaulted to the top of the list of zoo animals with the best common name when they were born August 11. (Go ahead: try to beat it.)

The two armadillos—who are not yet hairy or screaming—are the offspring of adult armadillos named Amber and Dylan Walter. The parents were recommended to breed according to the Association of Zoos and Aquariums’ Screaming Hairy Armadillo Species Survival Plan. The species, which is native to Argentina, Bolivia, and Paraguay, is listed as one of “least concern” by International Union for Conservation of Nature. Read more from Benjamin Freed for Washingtonian.

By studying the impact on microscopic, shallow water organisms, researchers got a glimpse of the impact of warming seas. 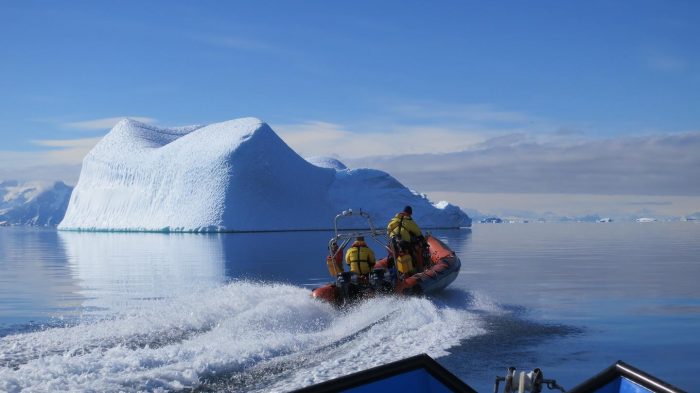 When it comes to climate change, we’re often debating the impact of just one or two degrees of warming. But when it comes to ocean temperatures, we don’t have a ton of in situ research that shows the consequences of an ever-so-slightly more tepid sea. Now, thanks to a new study published Thursday in Current Biology, we know that when Antarctic Ocean waters warm just one or two degrees Celsius, it completely changes the ecosystem in a way even the study’s authors did not anticipate.

“We knew there would be changes, but it was the extent of the change that surprised us,” said Gail Ashton, the lead author of the study and a researcher with the British Antarctic Survey and the Smithsonian Environmental Research Center, in a phone interview. “We expected maybe a 10 percent growth rate [of certain organisms]. We saw a 100 percent growth rate.” Read more from Kaleigh Rogers for Motherboard. 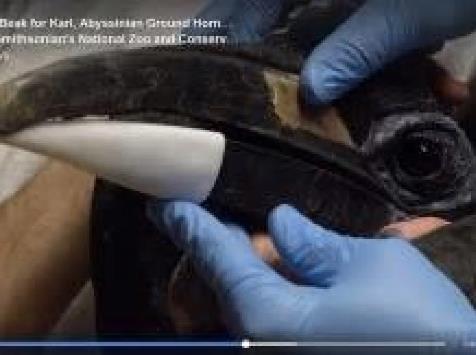 Specialists from the Smithsonian’s National Zoo and its National Museum of Natural History worked out a way to use a 3D printer to make a new bill for an exotic bird that needed one.

Specialists from the Smithsonian Institution have used a 3-D printer to help an unusual bird at the National Zoo keep its species going on into the future.

The printer does not actually create new members of the Abyssinian ground hornbill family.

But the zoo said Thursday that it has collaborated with the Museum of Natural History to build a new beak for a ground hornbill that badly needed one. Read more from Martin Weill for The Washington Post.

All babies are beautiful—even the hairy, screaming ones