Home Art American Art Museum Murder is Her Hobby: Crime in a nutshell

For the first time all 19 surviving Nutshell Studies of Unexplained Death created by Frances Glessner Lee, the “mother of forensic science,” are going on public view, with an exhibition opening October 20 at the Smithsonian’s Renwick Gallery. 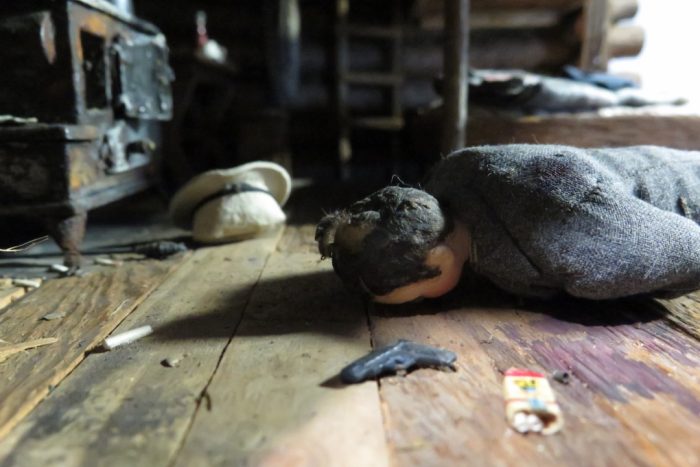 Frances Glessner Lee, detail of one of the “Nutshell Studies of Unexplained Death” (Collection of the Harvard Medical School, Harvard University, courtesy Office of the Chief Medical Examiner, Baltimore)

When reached by phone, Ariel O’Connor, objects conservator at the Smithsonian American Art Museum, was in Baltimore’s Office of the Chief Medical Examiner studying 18 intricate crime scenes. Each was made in the 1940s and ’50s by Frances Glessner Lee for Harvard’s Department of Legal Medicine to show a death in miniature, with details carefully crafted down to the working door locks and painted blood spatters. One has a body sprawled on the street outside an illuminated storefront stocked with magazines, comic books, wrapped lollipops, potato chips, bottles, and other wares, all handmade to scale. “I’m looking at the sidewalk and there are tiny cigarettes, three millimeters long, that she rolled by hand,” O’Connor told Hyperallergic. “Her level of detail just astounds me daily.” 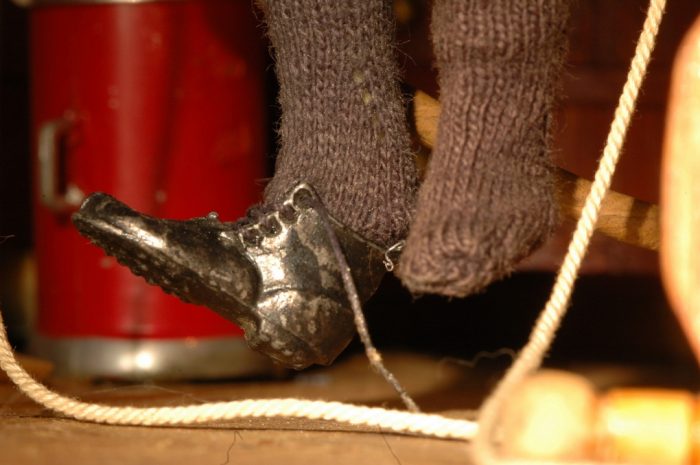 For the first time, all 19 of Lee’s surviving dioramas will be on public view in Murder Is Her Hobby: Frances Glessner Lee and the Nutshell Studies of Unexplained Death. The 18 Nutshell Studies still in use for criminologist training at Baltimore’s Medical Examiner’s Office are joined by a 19th “lost” study found in the attic of her New Hampshire estate in the 1990s. O’Connor is working on stabilizing, cleaning, and conserving the delicate models before the exhibition, organized by curator Nora Atkinson, opens on October 20 at the Renwick Gallery of the Smithsonian American Art Museum in Washington, DC.

Lee was not allowed by her wealthy Chicago family to go to university, and it was only later in life that she was free to pursue her interest in forensics. Now recognized as the “mother of forensic science,” Lee used her inheritance to endow the first program for studying forensics at Harvard University, and in 1943, she was named State Police Captain of New Hampshire for her service. A rare woman in a male-dominated field, she also used what were perceived as traditionally feminine crafts — stitching, knitting, and doll houses — to improve the field of homicide investigation. 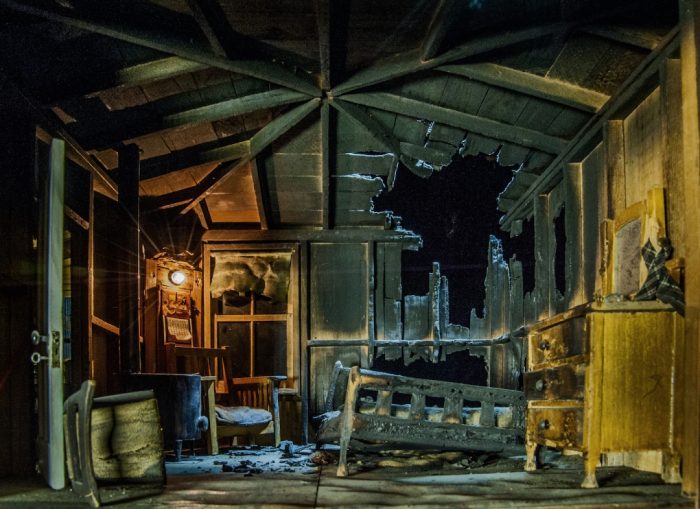 “A lot of these materials that she used, they’re approaching 70 and 80 years old now,” O’Connor explained. The most fragile is “Burned Cabin,” which Lee set on fire, and features a skeleton just visible in the charred bed. While the wooden structures, constructed by carpenter Ralph Mosher who collaborated with Lee, are in sturdy shape, the plastics on the windows are brittle and warped, the electric lighting needs to be updated. The Smithsonian’s team is creating custom LED lightbulbs that minimize heat and achieve the night or daylight tones Lee intended. “We discovered in her handwritten notes [on the models] that some of the lights needed to be blue and green, and these had had white lightbulbs in them,” O’Connor said. “This will be the first time that you’ll actually see them again as night scenes.”

The Nutshell Studies were, as Lee put it, aimed at training homicide investigators to “convict the guilty, clear the innocent, and find the truth in a nutshell.” And the rich detail encouraged intense examination of every corner, whether locating a minuscule bullet stuck in the rafters of a cottage, or considering the rigor mortis in the legs of a woman found drowned in the bathtub. Each Nutshell Study is a composite of true crime scenes, and Lee’s imagination. 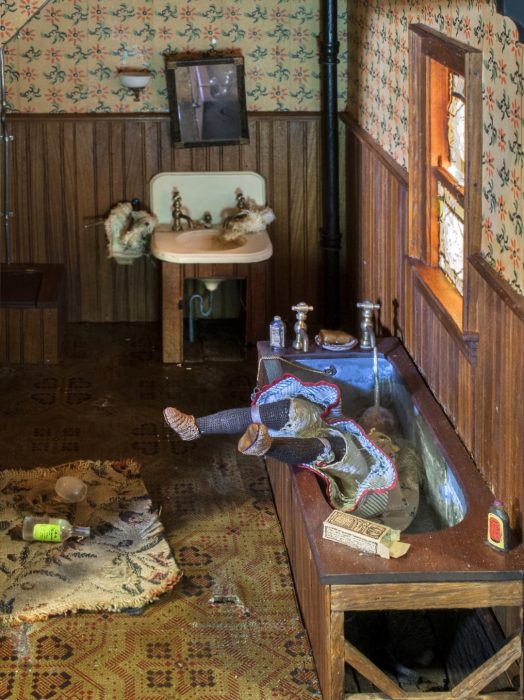 “It’s as if she’s created a world of virtual reality that could be complete from any angle,” O’Connor said. That includes elements that the viewer cannot see in totality, like a poster in a saloon partially visible through a door, completely illustrated to advertise a boxing match. A bathroom has a view to a metal fireplace and bricks, an entire two-story room Lee added solely for that glimpse.

“She built these miniature worlds based on actual crimes and unexplained deaths that had occurred, and she set them in these scenes of her imagination,” O’Connor said. “So every tiny detail needed to be perfect and believable for detectives to be invested in the exercise of looking for clues.” A detective approaching the Nutshell Studies wouldn’t know which objects were clues, and which weren’t, but the attention to all these pieces would keep them engaged. A seemingly unnecessary level of pattern on a floor might hide something not immediately visible, for instance, and a pie freshly baked in an oven hints at an accidental death from asphyxiation, yet the heavy iron near the housewife’s corpse in the same model could be a murder weapon. 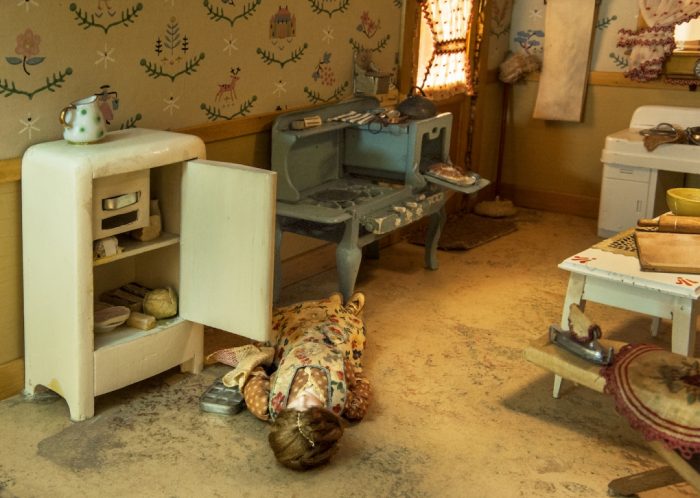 Some of those details have aged so that the original clue is no longer evident. Red blood painted on a porcelain doll’s face has faded to purple blotches that a criminologist might interpret as decomposition. O’Connor is aiming to have the Nutshell Studies as close as possible to how Lee designed them, without altering the material. Much like a crime scene investigator, she is determining what materials Lee utilized, how these are deteriorating, and how to safely transport them. Using photographs from the 1950s and ’60s, conservators can analyze how lighting fixtures have changed, or swapped around, and impressions on a tablecloth can suggest items that are missing, such as a long displaced knife that O’Connor discovered lodged beneath a small sofa.

Murder Is Her Hobby will highlight the art and the science of Lee’s work, as well as how she portrayed violence against women and other marginalized people. “She was really concerned for victims on the fringes of society,” O’Connor stated. “They’re almost always poor or female or both; they’re prostitutes, drunkards, and people who are not mainstream, whose cases might not be taken seriously. She advocated that everyone, regardless of gender, regardless of income, was worth investigating.”

As O’Connor delicately works with the Nutshell Studies, addressing cracks in three blood pools in what couple be a triple homicide or murder-suicide, and tracking down wayward murder weapons, she hopes that “your eye will be drawn not to the material aging, but the investigation and the clues.” Visitors to Murder Is Her Hobby will be invited to draw their own conclusions about these mysterious deaths, whether murder, suicide, or fatal accident. “There are solutions, but they’re not solutions that you need to know,” O’Connor said. “You don’t need to arrive at the same solution that she had, you can make your own solution. It’s about the journey of investigation.” 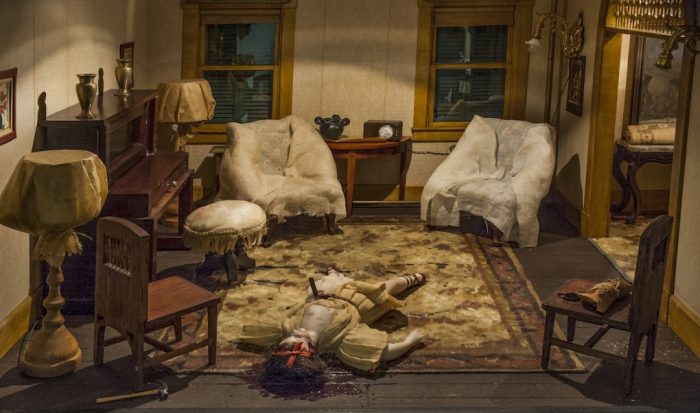 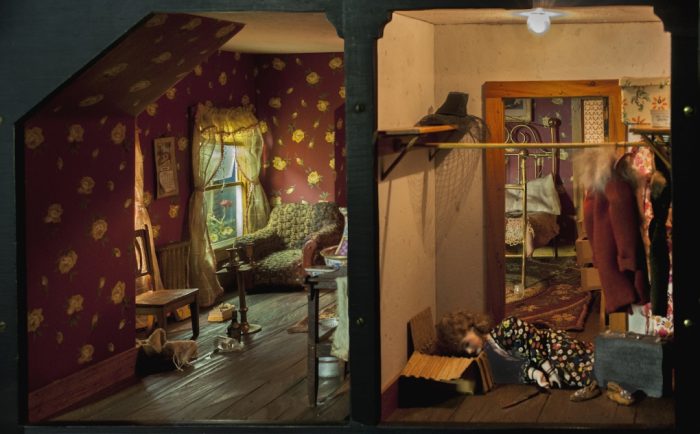 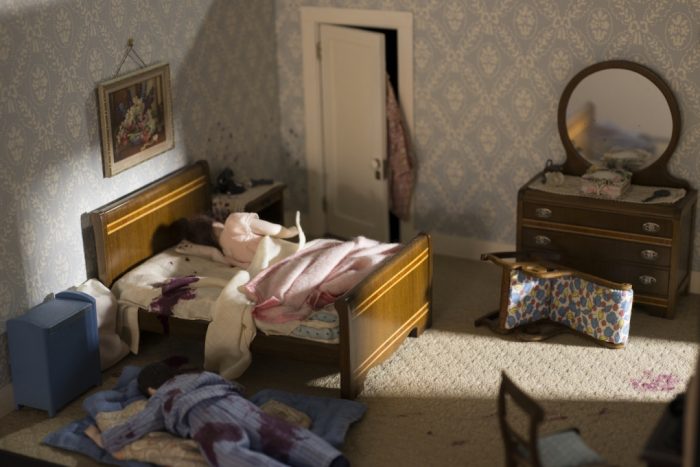 This article by Allison Meier was originally published by Hyperallergic.

Sidedoor: Murder is her hobby