The grand reopening of the Freer and Sackler galleries this weekend features new exhibitions, an outdoor festival and a more cohesive visitor experience. Don’t miss the spectacular video projection created especially for the reopening! 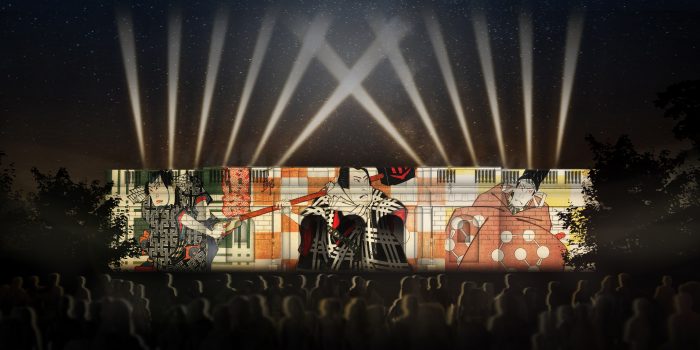 All eyes turn this weekend toward the Freer Gallery of Art and the Arthur M. Sackler Gallery, which reopen Oct. 14 following substantial renovations.

Marked by the free, two-day IlluminAsia Festival beginning Saturday, Oct. 14 at 5 p.m., the Freer|Sackler is promoting a tagline – “Where Asia Meets America” – it hopes will draw legions of new and repeat visitors and further clarify its mission. (The festival continues on Sunday, Oct. 15, from 11 a.m.- 5 p.m.) 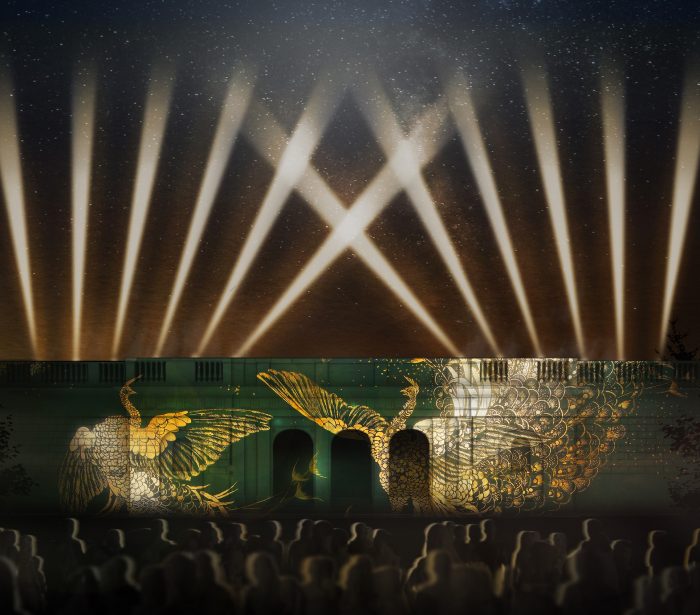 Wide says he’s particularly excited about the video projection, which will be shown four times only between 8 p.m. and midnight on Oct. 14. “We’re going to take the visitor on a psychedelic journey inspired by the collection, turning the Freer into a grand canvas,” he says. “It’s a melding of art, musical performance and cinema.”

The 12-minute work will tell the story of the Freer’s founding and project images of Asian architecture and artworks right on the Mall-facing side of the building. UK-based 59 Productions – which has created works for the 2012 London Olympics, Sydney Opera House, the Edinburgh Festival and others– was commissioned to create the piece. 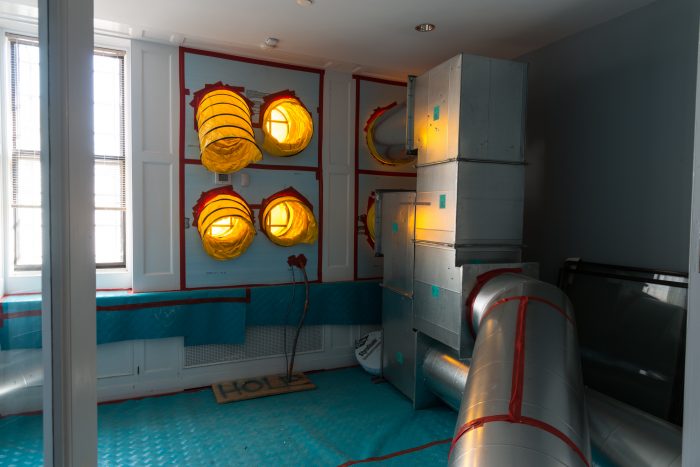 HVAC and humidification systems were replaced over the course of the 18-month renovation of the Freer Gallery. (Photo courtesy Freer and Sackler Galleries)

The closure of the two galleries – the Freer for nearly two years, the Sackler since July – was not only about making a slew of infrastructure upgrades, says Karen Sasaki, head of design and publications. It was about taking a fresh look at Charles Lang Freer’s intentions for those collections that bear his name and building greater cohesion in visitors’ minds between the two galleries, positioning them as a single destination.

In the Freer, “we replaced the reheat and humidification systems in collections, conservation and galleries and updated the mass notification system,” she says. “All of that had to be integrated into the old building to bring it up to code.” The Meyer Auditorium was renovated with a new digital lighting and sound system and the building’s 28-year-old elevators replaced. 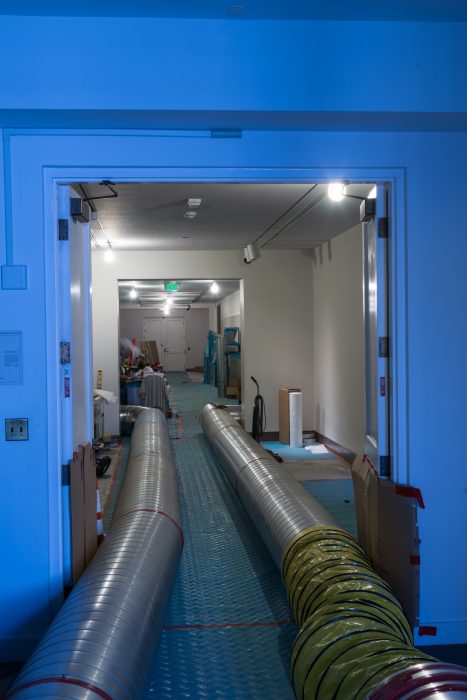 HVAC and humidification systems were replaced over the course of the 18-month renovation of the Freer Gallery. (Photo courtesy Freer and Sackler Galleries)

Freer|Sackler staff learned from a yearlong survey that many visitors not only didn’t know the galleries housed Asian art, they were often unaware that the galleries existed until they stumbled into them. In a bid to increase awareness of the pair of museums and to improve the flow between them once visitors are inside, “we have greatly improved wayfinding and signage.” Numbering galleries sequentially as visitors leave the Freer and enter the Sackler is designed to provide what Sasaki calls “a more continuous experience,” even given the differing aesthetics of each museum.

Opened in 1923, the Freer that guests see on Oct. 14 will hew more closely to its founder’s vision, an original sketch of which can be found on hotel stationery in the Freer|Sackler archives. Carpeting has been removed, original terrazzo floors exposed and refurbished and marble baseboards installed. 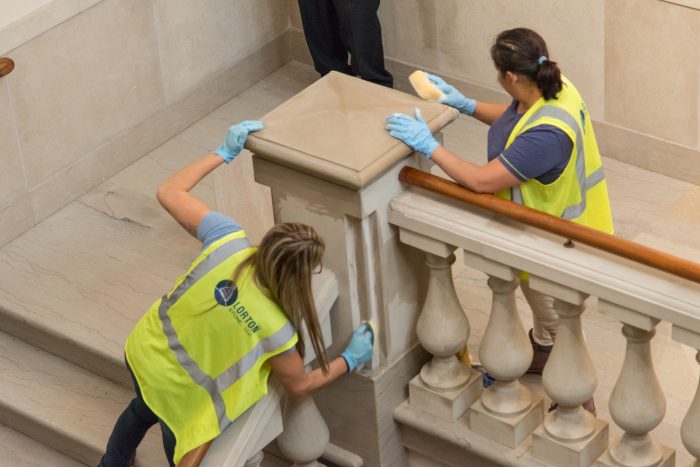 At the Sackler, four new temporary exhibits are set to open. They include Divine Felines: Cats of Ancient Egypt; Encountering the Buddha: Art and Practice Across Asia; Resound: Bells of Ancient China; and Subodh Gupta: Terminal.

On the day of the re-opening and beyond, “I would hope that visitors would walk through slowly, and that they would leave feeling invigorated and refreshed, rather then visually depleted,” says Lee Glazer, curator of the American art collection. 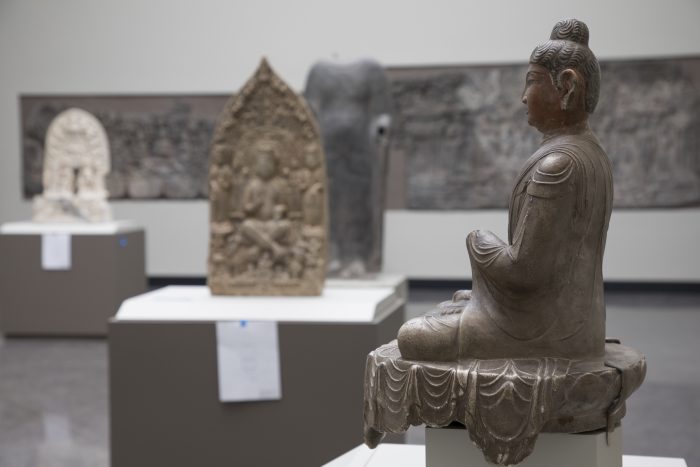 Among the new temporary exhibitions on view at the Sackler Gallery is “Encountering the Buddha: Art and Practice Across Asia.” (Photo courtesy Freer and Sackler Galleries)

Before turning his focus to Asia, Freer collected work by James McNeill Whistler and his American followers, the so-called ‘tonalists.’ Many of Freer’s earliest Asian acquisitions – decorated tea wares, ukiyo-e prints and paintings – were chosen because they resonated with the compositions and subtle tonalities of those first acquisitions by Whistler and other contemporary Americans. The threads connecting these seemingly disparate artworks – what Freer called “points of contact” – will be more tightly drawn in the renovated museum’s app, labels and gallery talks, Glazer adds. 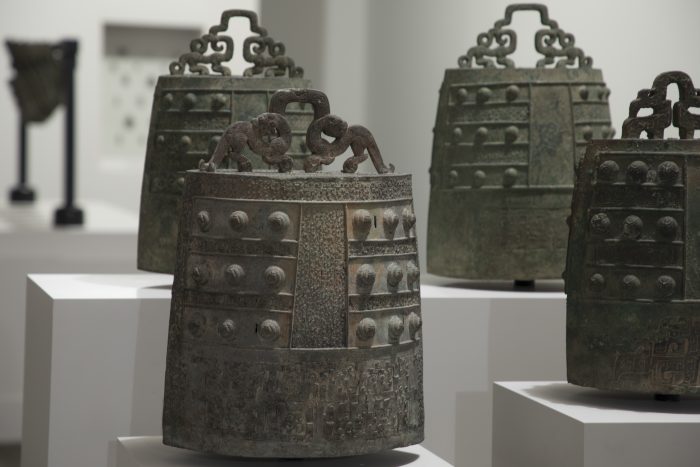 Among the new temporary exhibitions on view at the Sackler Gallery is “Bells of Ancient China.” (Photo courtesy Freer and Sackler Galleries)

Wide observes that Oct. 14 marks the start of a year of special programming to celebrate the new Freer|Sackler. “This is not the crowning,” he says. “This is only the beginning.”

Julian Raby, the Dame Jillian Sackler Director of the Arthur M. Sackler Gallery and the Freer Gallery of Art, and Thomas Wilde, assistant director for special projects at the Freer and Sackler Galleries, recently participated in a roundtable discussion about the reopening with Program Officer Olga Bashbush at the U.S. State Dept.