Julian Raby, director of the Freer Gallery of Art and Arthur M. Sackler Gallery since 2002, has retired. His last day at the Smithsonian was  December 15. 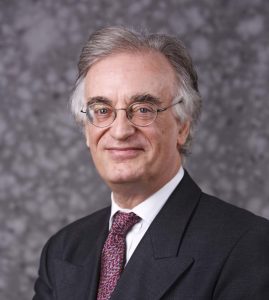 As director of the Freer|Sackler, Raby most recently oversaw the museums’ reopening in October after an extensive 18-month renovation. During his tenure he has championed such popular exhibitions as “Return of the Buddha: The Qingzhou Discoveries” (2004), “Style and Status: Imperial Costumes from Ottoman Turkey” (2005), “Hokusai” (2006), “Encompassing the Globe: Portugal and the World in the 16th and 17th Centuries” (2007), “Garden and Cosmos: The Royal Paintings of Jodhpur” (2008), “Tsars and the East: Gifts from Turkey and Iran in The Moscow Kremlin” (2009), “Yoga: The Art of Transformation“ (2013), “Turquoise Mountain: Artists Transforming Afghanistan” (2016) and “The Art of the Qur’an: Treasures from the Museum of Turkish and Islamic Art” (2016).

In addition, Raby has served as curator, concept designer and consultant for numerous museum exhibitions in the United States and abroad, including the landmark “Iznik: The Pottery of Ottoman Turkey” at the Turkish & Islamic Arts Museum in Istanbul (1989), “Empire of the Sultans: Ottoman Art from the Khalili Collection” (1995), “Royal Persian Painting: The Qajar Epoch” at the Brunei Gallery School of Oriental and African Studies at the University of London (1999) and “Portraits of the Sultan: Picturing the House of Osman” at the Topkapi Palace Museum in Istanbul (2000).

Richard Kurin, Smithsonian Distinguished Scholar and Ambassador at Large, will serve as acting director of the museums, while a search is conducted for Raby’s successor.

In his current position, Richard focuses on strategic direction, institutional partnerships, public representation, philanthropic support, and special initiatives. He will continue his efforts in these areas while serving as the acting director of the Freer and Sackler Galleries.

“The Art of the Qur’an”: Opening the door to understanding

Chase Robinson to assume leadership of Freer and Sackler Galleries

Chase Robinson to assume leadership of the Freer and Sackler Galleries