The news was tumultuous this week as we looked back on the 1968 riots, the Standing Rock protests and the Poor People’s campaign. We also previewed some politically charged art exhibitions and wondered if we’d be able to afford to see them.

When Stephanie Stebich walks around the Smithsonian American Art Museum and the Renwick Gallery—the two downtown institutions she oversees—she seems to spend as much time looking at the ground as at art on the walls. Over the course of an hourlong tour, Stebich swoops down repeatedly to grab trash from the floor—a receipt, a toothpick, and other inconsiderately discarded bits. At the end of each day, her pockets are full. “Nobody wants to go to a dirty museum,” she says.

Cleanliness is nice, but it probably isn’t why so many people have been showing up at these two museums’ exhibits. From the Renwick’s blockbuster immersive experience “Wonder” to its current oddball hit show, “Murder Is Her Hobby: Frances Glessner Lee and the Nutshell Studies of Unexplained Death,” featuring crime-scene dioramas,the Renwick and SAAM are offering some of Washington’s most exciting and unexpected fare. Read more of Andrew Beaujon’s interview with Staphanie Stebich for the Washingtonian: Visual Stimluation – The Washingtonian 01-02-17

Radical women and climate change: what to expect from the US art world in 2018

A look ahead at the next 12 months suggests a varied landscape encompassing diverse work based on imprisonment, civil rights and the Vietnam war 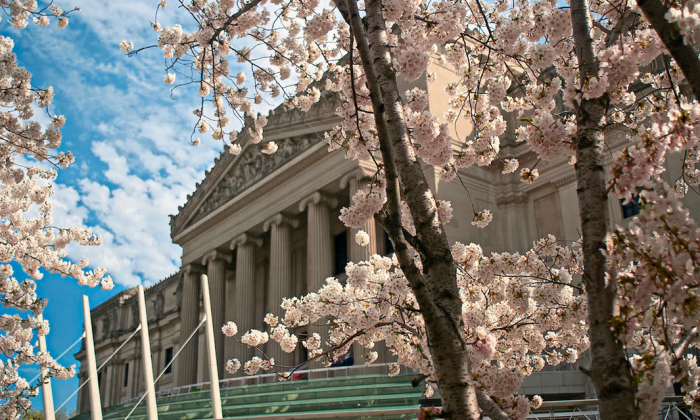 The Brooklyn Museum, which will be home to an exhibition of feminist art called Radical Women: Latin American Art, 1960-1985 on 13 April. Photograph: Jon Grizzle

Sexual misconduct reports, vital signs of climate change, altering net neutrality: 2017 was a tumultuous year for America. A number of upcoming art exhibitions continue the protest, debate and argument around free speech, the environmental crisis, civil rights and feminism – and look back on a year that changed the game.

The Brooklyn Museum opens an exhibition devoted to pioneers of feminist art in Radical Women: Latin American Art, 1960–1985 on 13 April, which explores the groundbreaking work of 120 artists from 15 countries. The politically charged artwork is used as a form of social critique, especially in the works of Brazilian performance artist Lygia Pape, Cuban film-maker Sara Gómez and Afro-Latina activist and artist Marta Moreno Vega, the founder of the Caribbean Cultural Center African Diaspora Institute. Read more from Nadja Sayej for the Guardian.

1968’s chaos: The assassinations, riots and protests that defined our world 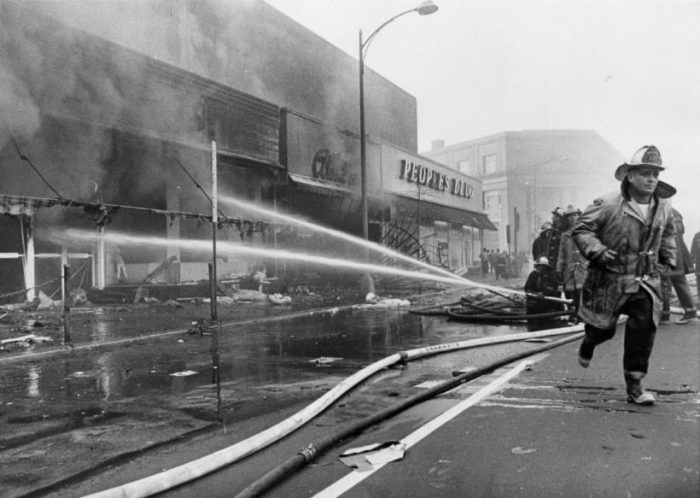 Firefighters fight a blaze in Washington on April 5, `1968, when the city exploded in riots after the assassination of the Rev. Martin Luther King Jr. (The Washington Post)

When Alan Shane Dillingham, a historian at Spring Hill College in Alabama, lectures on the 1960s he starts by displaying a timeline of the decade’s most iconic, tumultuous year — 1968.

The assassinations of the Rev. Martin Luther King Jr. and Robert F. Kennedy. The riots that shook Washington, Chicago, Baltimore and other U.S. cities. Campus protests. Civil rights protests. Vietnam War protests. The Tet Offensive. The My Lai massacre. The rise of Richard Nixon and the retreat of Lyndon Johnson. And so much else: Black Power, “The White Album,” Andy Warhol, “Hair,” Apollo 8, the first black character in Peanuts.

“Was there something in the water?” Dillingham asks his students. “What is it about this year?”

With 2018 marking the 50th anniversary of that extraordinary year, Dillingham and more than 1,500 other historians descend on Washington this week for the American Historical Association’s annual meeting, where they will grapple with that question and others about 1968 in a series of special panels. Read more from Michael Rosenwald for The Washington Post. 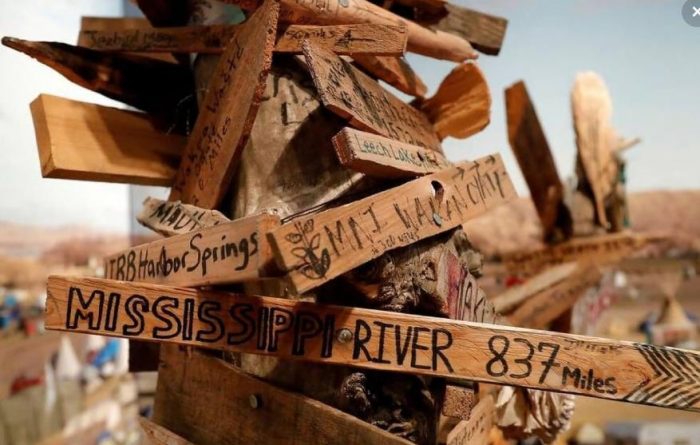 That’s the message of an 11-foot mile-marker post from the Standing Rock Sioux Reservation in North Dakota, a recent addition to the National Museum of the American Indian’s groundbreaking exhibition “Nation to Nation: Treaties Between the United States and American Indian Nations.”

The mile marker was made by activists gathered at the Oceti Sakowin (Great Sioux Nation) camp to protest the Dakota Access Pipeline. The mile marker features hundreds of handmade signs pointing to the reservations, cities, states and countries represented by some of the 12,000 protesters who tried to block the pipeline’s construction under the Missouri River just north of the reservation. Read more from Peggy McGlone for The Washington Post.

For the first time in half a century, visitors to the world’s largest cultural institution, the Metropolitan Museum of Art, will have to pay a mandatory admission fee of $25 if they do not live in New York State under a new policy that begins March 1, the museum announced on Tuesday. Read more from Robin Pogrebin for The New York Times: Met Changes 50-Year Admissions Policy_ Non-New Yorkers Must Pay – The New York Times 01-04-18

Exhibit, panel and Q&A to take place on Jan. 9 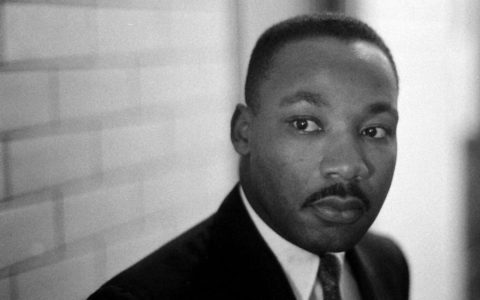 The exhibition media briefing will serve to commemorate the 50th anniversary of the Poor People’s Campaign on 1968. There will also be a brief panel presentation, Q&A session and guided tours of the exhibition. Read more from Shantell E. Jamison for Ebony. 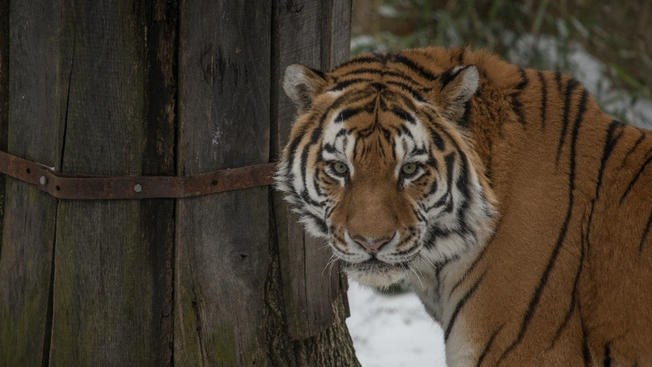 The Smithsonian National Zoo has debuted its first Amur tiger since 1948.

Pavel came from Chicago’s Lincoln Park Zoo and keepers describe him as “reserved but laid-back when interacting with animal care staff.” Read more from Jacinth Jones for NBC Washington. 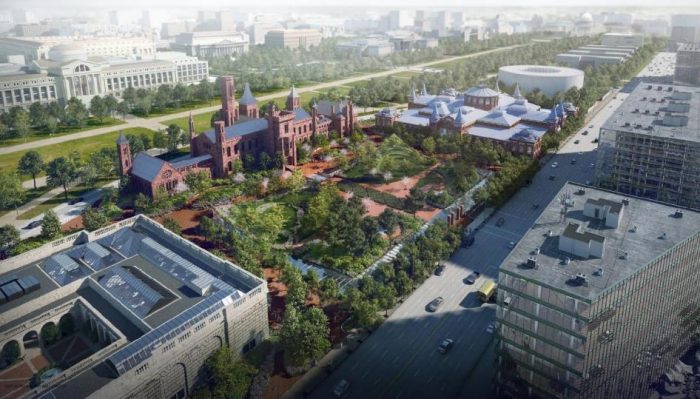 The Smithsonian Institution’s plan to redevelop the area around its iconic administration building, known as the Castle, by replacing its formal garden and relocating three entrance pavilions received mixed reaction from the federal agency that must eventually approve it.

The $2 billion plan is intended to increase the area’s visibility from the Mall, add such visitor amenities as restrooms and food service, and improve its accessibility and circulation.

In their first comments on the plan, members of the National Capital Planning Commission praised its attempt to better connect the buildings and gardens, but they questioned the demolishing of the Enid A. Haupt Garden and the uncertainty regarding the future use of the Arts and Industries Building. Several members suggested museum officials were too focused on the Mall and its tourists, to the detriment of city residents. Read more from Peggy McGlone for The Washington Post.