Home News & Announcements Administrative News The Strength of the Smithsonian: Results of the Volunteer Survey

In the fall of 2016, at the request of the Office of Visitor Services, the Office of Policy & Analysis (now known as SOAR, Smithsonian Organization and Audience Research) conducted a Smithsonian-wide survey of volunteers to measure their  satisfaction and determine ways to improve their experience. 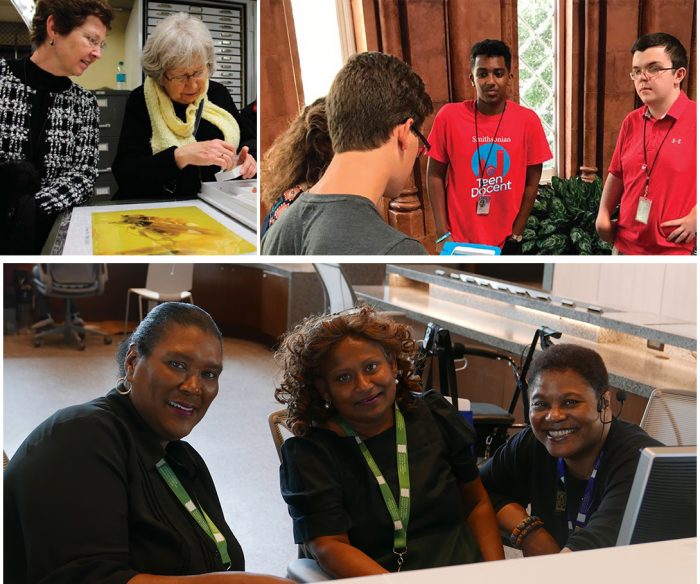 The online survey received a total of 2,557 eligible responses. The vast majority of respondents had one volunteer role (93%). The balance reported that they had multiple roles (7%). The findings reported here are based on the 2,736 volunteer roles reported by 2,557 respondents.

Over three-quarters of respondents were public-facing volunteers, whose roles included the three most often selected: docent/facilitators or education specialists (33%), information desk specialists (27%), and public programs/events volunteers (17%). The other quarter consisted of behind-the-scenes contributors (16%) and digital volunteers (7%).

Smithsonian volunteers were quite satisfied with their volunteer experiences—four in five respondents gave a superior or excellent rating (80% superior and excellent combined). One in five selected the lower three categories (20% good, fair, and poor combined). How satisfied the volunteers were varied based on their roles. Behind-the-scenes contributors were the most satisfied, closely followed by docent/facilitators or education specialists, and information desk specialists. Conversely, public programs/events volunteers and digital volunteers rated their satisfaction lower. Almost nine in 10 respondents felt valued by the Smithsonian: 89% strongly agreed or agreed with the statement “as a volunteer, I feel valued by the Smithsonian.” Volunteers who selected neither agree nor disagree, disagree, or strongly disagree, were more likely to give a lower overall satisfaction rating of good, fair, or poor.

Overall, volunteers wanted to feel meaningfully involved in the Smithsonian. Factors that impacted volunteer satisfaction positively and negatively, as explained by volunteers in open-ended responses, fell into four main categories: (1) roles and relationships (social and professional), (2) training and enrichment, (3) administration and management, and (4) Smithsonian resources, perks, and environment. High-quality experiences with these factors improved the volunteer experience, while dissatisfied volunteers experienced poor quality versions of the same (little to no training, poor
workplace relationships, and so on).

A third of the respondents had suggestions for changes to enhance their volunteer experience. Those who gave lower satisfaction ratings were more likely to have suggestions. From their open-ended comments, it is clear that volunteers care about strengthening relationships, improving timely communication in the workplace, enhancing enrichment opportunities, and refining systems for administration and management such as standardized scheduling.

The average age was 58, with a median of 64. Over half of the volunteers were in their 60s or 70s. Volunteers in their 70s contributed nineteen hours per month, the most hours. Those in their 60s and 70s contributed 60 percent of the total of Smithsonian volunteer hours. Three in five volunteers said that they had been with the Smithsonian for less than five years (59%). The average years of service was six years and the median was three.

Just over half of the respondents were retirees, and two in five were employed. Volunteers’ demographic distribution varied by role: men’s proportion was higher compared to other roles among docent/facilitators or educators and behindthe-
scenes contributors; public programs/events volunteers and digital volunteers were slightly younger and more likely to be employed than others; and Blacks or African Americans made up higher proportions of information desk specialists (21%)
and public programs/events volunteers (24%) and lower proportions of behind-the-scenes contributors (7%) and docent/facilitators or education specialists (9%) than in other roles.

The volunteers wanted to be recognized for their service. Most preferred that the appreciation involve enrichment program opportunities and informal thanks by staff. Many also mentioned formal acknowledgement, such as appreciation events or years-of-service pins.

The volunteers said they were especially well supported in four areas: scheduling, training, work instructions, and timely information. By comparison, the results show support was less adequate in two areas: technical support and feedback about their performance. Notably, one-third of respondents didn’t agree or were ambivalent that they received adequate feedback.

Volunteers’ top motivations were quite altruistic and learning-oriented. The three reasons for volunteering selected as very important most often were: support a mission I believe in, help the public, and exposure to different experiences. The second tier of motivations included learn about the Smithsonian, followed by interact with Smithsonian staff. Reasons that may be construed as for volunteers’ own personal benefit were less important. Motivation showed interesting patterns by role, age, and sex. Support a mission I believe in was consistent across all roles. Help the public was more important for the public-facing information desk specialists and docent/facilitators or education
specialists and less important for behind-the-scenes contributors. Exposure to different experiences was more important for public programs/events volunteers. Information desk specialists and public programs/events volunteers saw learn about the Smithsonian as very important, while the non-public-facing volunteers more often identified this motivation as not important. The opportunity to interact with Smithsonian staff was more important for behind-the-scenes contributors and less important for digital volunteers.

Two reasons stood out as more important for women: exposure to different experiences and access to “perks.” The top three reasons, support a mission I believe in, help the public, and exposure to different experiences, topped the list for each age cohort except teens, who found supporting a mission less important than other age groups. Aside from the dip among teens, supporting a mission was consistent across ages, as was help the public. Exposure to different experiences was more important for younger volunteers and declined in importance for older cohorts. Learn about the Smithsonian was less important to teen volunteers and those over 70 than to volunteers between those age groups. Interact with Smithsonian staff was most important for teens and 20 year olds and then saw a fairly steep decline until it stabilized with those in
their 40s or older.

Overall, Smithsonian volunteers are satisfied with their volunteer experience and feel valued by the Smithsonian. The results suggest that volunteers are mission-driven and happiest when they feel purposeful, social, appreciated, well-supplied, well-prepared, and consulted. Enhanced opportunities for teambuilding, social events, enrichment, flexible scheduling, and professional development would improve the volunteer experience. Additionally, many volunteers have need of a central informational resource that provide timely updates, event calendars, feedback mechanisms, and information regarding roles, rights, and responsibilities.

Public programs/events volunteers were the least satisfied with their volunteer experience. Their lower satisfaction may be linked to several factors: fewer volunteer opportunities due to inflexible scheduling, unfulfilling assignments, and insufficient training. Also, their reasons to volunteer were slightly different than those of other public-facing volunteers. The Smithsonian can pay more attention to pairing volunteers with projects that best suit their skills and interests, and supervisors would benefit from support and training from OVS regarding how to best manage volunteers.

Smithsonian volunteers are not representative of the US population nor the DC metropolitan area. If OVS prioritizes volunteer diversity, it should lead the Smithsonian in considering whether or not the Institution is inadvertently excluding some people because of the way volunteer programs are marketed and structured. The findings should inform its recruitment strategies.

Volunteer with the Smithsonian