Home Feature Stories How do you tell a thirsty elephant not to take a drink?

When DC Water announced possible contamination of the city’s water supply last month, it was an irritating nuisance for residents who had to boil cooking and drinking water for 48 hours. At the National Zoo, where staff are responsible for rare and endangered animals who require thousands of gallons of water each day, the alert was a dangerous emergency. 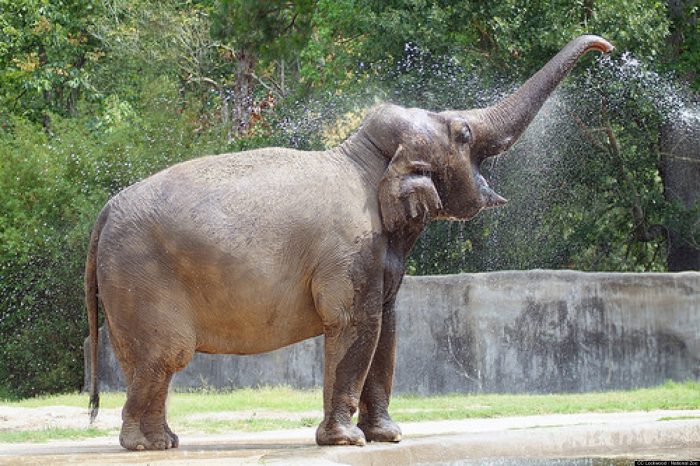 Bozie enjoys a spritz at the National Zoo. (Photo by C.C. Lockwood)

When news of a water-contamination threat in parts of the District’s Northwest and Northeast quadrants broke last month, NZP staff scrambled to build a makeshift system that could provide safe, clean water to all animal areas in the Park  for as many as three days.

Late in the evening of Thursday, July 12, the news broke that unusually low pressure in one of DC Water’s pumping stations may have allowed for harmful contaminants to enter the domestic water pipes serving portions of Washington.

By 6 a.m. the following morning, and almost simultaneously, emergency notification was emailed to NZP by Betsy Herrelko, Assistant Curator of Animal Welfare (who lives adjacent to the Zoo) and Eric Gentry, Director of the Smithsonian’s Office of Emergency Management. Numerous staff from several departments leapt into action.

D.C. residents were advised via phone calls or texts from DC Water to boil tap water until further notice. However, Zoo staff had to think on a much larger scale than the kitchen sink. They quickly crafted a plan to ensure safe drinking water for the animals and that Zoo kitchens feeding both animals and humans had access to clean water. 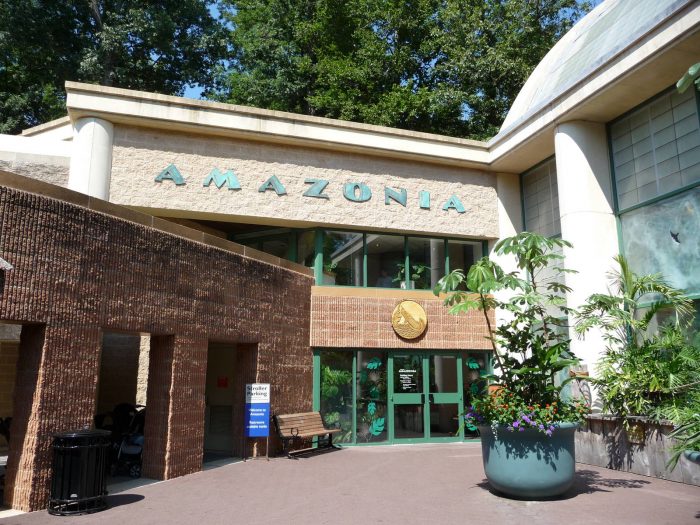 The Amazonia exhibition at the Zoo replicates a rainforest habitat and staff quickly realized that the exhibition’s 28,000-gallon reservoir was the key to getting the entire park through the event, which lasted about 48 hours, says Nick Little, Aquatic Life Support Systems (LSS) operator. He and dozens of other staff hustled behind the scenes while few, if any, Zoo visitors had any inkling of trouble afoot, the Zoo operated on a normal schedule through the duration of the incident.

“As Rick Quintero, curator of LSS, was talking with other curators Zoo-wide], we recognized that Amazonia’s huge reservoir was full of water drawn before the crisis and perfectly safe for animal consumption,” says Little. “Our only concern was how to get it out” to any part of the Zoo that needed it.

Routine filter “backwashing”—or the normal process of replenishing the reservoir—was disabled Friday morning so no potentially contaminated city water could enter the reservoir.

With that piece in place, the next question was purely logistical.

Across the park, staff gathered vessels that could transport water from the Amazonia reservoir, where assistant curator Frank Keska and others helped pump clean water into containers. Arborist Ed Boss mapped out how carts and trucks would transport the filled containers to all corners of the park. 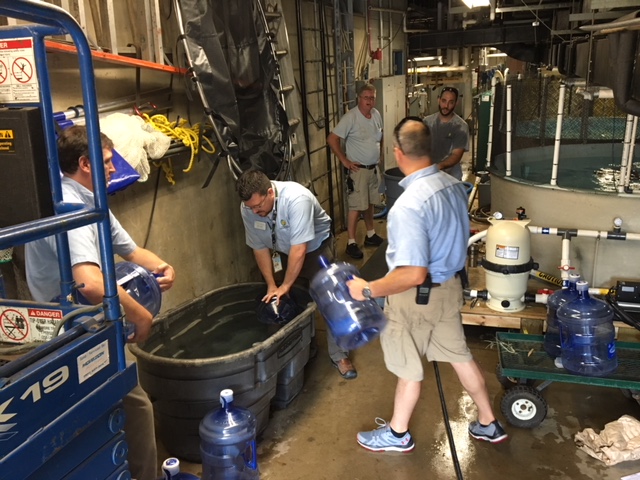 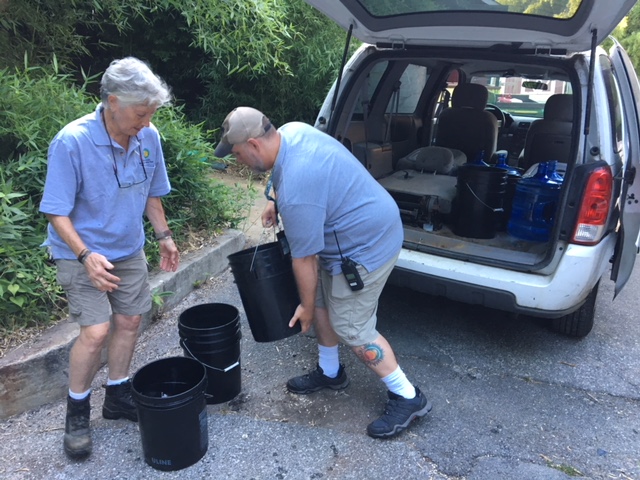 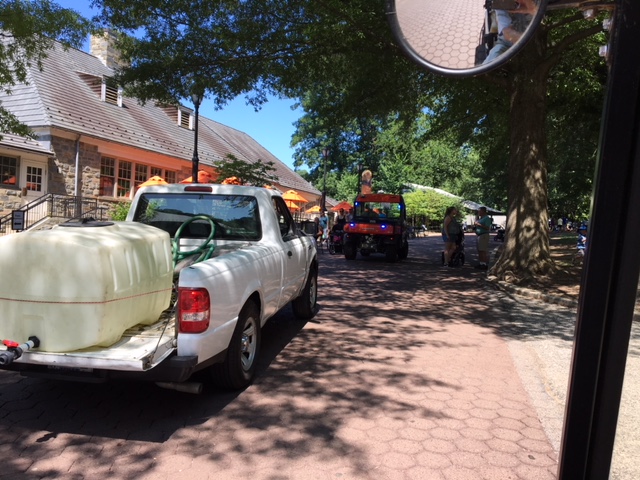 Then there was the bamboo situation. “It had been misted all night with [potentially harmful] city water,” Little says, noting that the well-known panda diet is also consumed by other animals and even used as an enrichment activity in the Great Ape house. Friday’s and Saturday’s bamboo (along with other food) was painstakingly rinsed by Commissary manager Bill Clements and his staff at the Amazonia loading dock.

By noon on Friday the 13th, everyone who’d asked for water had gotten it, Little says. And contingency plans were drawn up for the following day.

“We made sure on Friday that if the ban was continuing Saturday we’d be ready if called on,” says Boss. Supervisory horticulturist Craig Rudolph had the tanks ready to go, so Saturday went pretty smoothly. 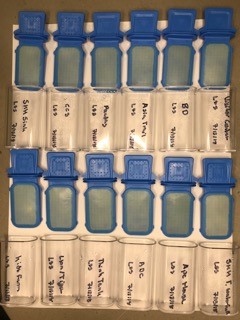 Life Support Systems operator Vivian Nyitrai tested dozens of water samples from around the Zoo for coliform bacteria. None were found to be contaminated. (Photo courtesy Ed Bronikowski)

Members of NZP’s veterinary team collected dozens of water samples. On Friday and Saturday, LSS operator Vivian Nyitrai tested the samples in LSS’ Water Quality lab for coliform contamination. “All tests came back negative,” says Little. “Even though this was an advisory [from D.C. Water], we weren’t going to risk the animals’ health.”

Ed Bronikowski, Senior Curator at NZP’s Department of Animal Care Sciences, described “a lot of heavy lifting by the keepers in getting safe drinking water to their animals.” He and others lauded Amazonia staff for being on call to serve all who came for water. Additionally, staff from the Office of Facilities Management and Reliability secured all drinking fountains and misters along Olmsted Walk and worked with LSS contractors to ensure safe water in the animal pools.

Bronikowski added that in any crisis—be it a blizzard, electrical outage or in this case, a threat to Zoo water—“all NZP departments respond immediately and appropriately. It’s something of which all of us can be very proud.”

UPDATE: DC Water released its comprehensive report on the Boil Water Advisory August 17. You can read the full report at https://www.dcwater.com/whats-going-on/news/dc-water-releases-comprehensive-report-pressure-drop-and-boil-water-advisory

Make no bones about it: We’re pretty excited to welcome one of the world’s most famous fossils 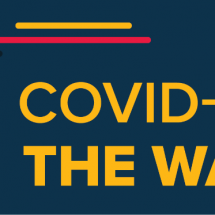