We’ll pretend that our motives are purely educational in publishing a ghoulish little history lesson on Halloween. 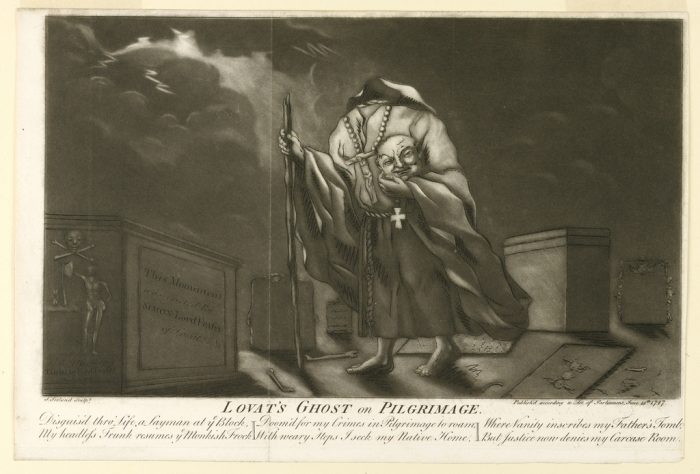 Beneath a foreboding sky streaked with lightning, a figure wanders through a cemetery.  Barefooted and dressed in a monk’s habit, he seems to be missing something. Quite literally, it may be his head, whose snarling visage is directed out at the viewer from the crook of this gruesome monastic’s left elbow. But who is this specter?  At left, along a sarcophagus, are the words, “The monument is erected by Simon Lord Fraser of Lovat,” and our headless figure seems to be making his way there. Beneath the print, a title and a witty handful of verses make the identification more concrete: Lovat’s Ghost on Pilgrimage.

On April 9, 1747, Simon Fraser, the 11th Lord Lovat, was the last prisoner to be executed on Tower Hill in London.  Condemned as a traitor for his role in organizing the 1745–46 Jacobite rebellion, the wily, Scottish octogenarian was beheaded before a large crowd. As the last victim of beheading by the British government, his ghost is sure to have secured its place on the pages of history books, but the greatest impact of Lord Lovat’s death is what it signals about the defeat of the Jacobite cause in Britain and the subsequent policies of repression of traditional Scottish highland culture. The Jacobite cause was based on monarchical secession and support for the Stuart family over the ruling Hanovers, but it was deeply bound up in religious differences—the Catholic Stuarts and their close ties to the continent versus the emphatic Protestantism of the Hanovers.  Adding fuel to the flame was the mounting frustration of many Scots with the crown—Lovat and many of his Highland Chieftain peers among them.

This print offers biting contemporaneous commentary on a momentous political moment. It was originally designed and published in 1747 by famed satirist William Hogarth (English, 1697–1764), whose social and political commentary was wildly popular in his time and whose influence on the relationship between politics and prints continues to this day. Indeed, this particular mezzotint, in the Drawings, Prints & Graphic Design Department at Cooper Hewitt, was published by Samuel Ireland  (English, 1744–1800), who republished much of Hogarth’s work a generation later. 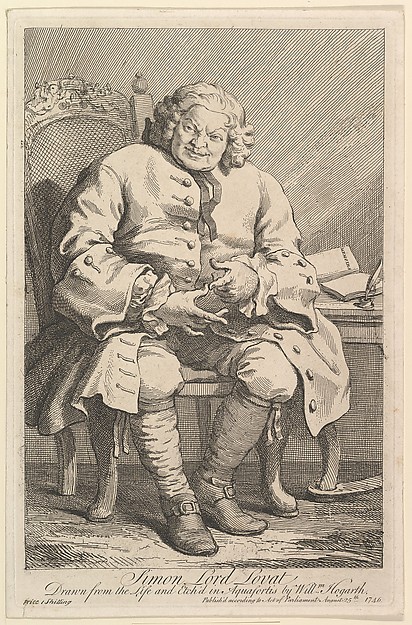 This post by Caroline O’Connell, the Collections Assistant in the Drawings, Prints & Graphic Design Department at Cooper Hewitt, Smithsonian Design Museum, was originally published Cooper Hewitt’s Object of the Day.