Home Feature Stories Everything you ever wanted to know about ticks, but were afraid to ask.

We’ve been waiting for warmer weather all winter, but as you frolic among the fields and flowers this spring, don’t forget to protect yourself from one of nature’s nastiest parasites. Torch writer John Barrat is not afraid to ask world expert Richard Robbins what he knows about these blood-sucking arachnids.

Who knows what lurks in this sunlit country meadow? Dr Richard Robbins does.

It was a short article about a tick with a long name, Haemaphysalis longicornis, that raised more than a few eyebrows last winter in the Journal of Medical Entomology.

Hundreds of these Asian parasites, which can reproduce asexually, had been found infesting a single Icelandic sheep living in a posh neighborhood in Hunterdon County, N.J. It was the first time this species of arachnid had been reported in the U.S. and no one is certain how it arrived.

One of the co-authors of the paper was Richard Robbins, a world expert on ticks who, as a research associate at the Smithsonian’s National Museum of Natural History, spends one day each week working in an office at the Museum Support Center in Suitland, Md. Robbins’ career includes seven years at the National Institutes of Health and 25 with the U.S. Army traveling the world studying ticks and the diseases they carry.

As the weather warms and the deer tick (Ixodes scapularis), the American dog tick (Dermacentor variabilis) and the lone star tick (Amblyomma americanum) begin emerging in the Eastern U.S., you can bet Robbins and his colleagues will also be on the lookout for H. longicornis. “Their potential to infest cattle and other livestock in the U.S. is of great concern,” he says. Not to mention they have no compunction about biting humans. 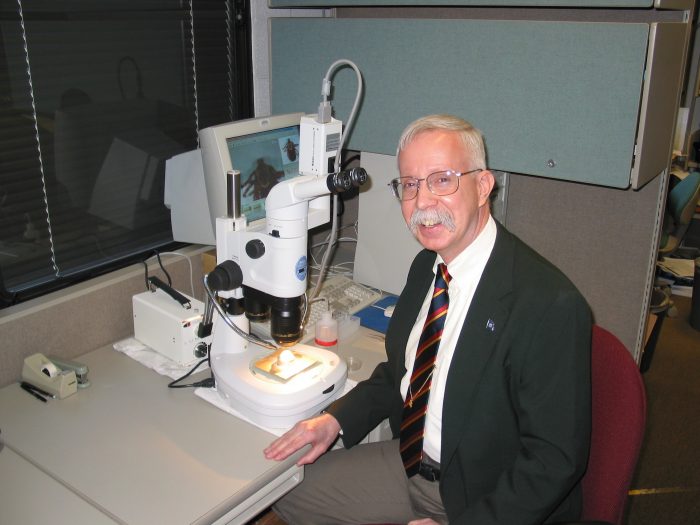 Dr. Richard Robbins studying ticks with a stereo microscope at the Uniformed Services University of the Health Sciences.

As an expert, what is your advice for someone who finds a tick attached to their skin?

Simple: just relax! Too often people panic and do stupid things when they find a tick on them. They yank it off and leave some portion of its mouthparts embedded in their skin. Then, there are many tales of how to properly remove a tick. You know, put gasoline on it, touch it with a lighted match, or cover it with Vaseline. None of this works.

A burning match, in fact, will heat the fluids inside a tick’s body and inject them into your skin. So that is the last thing you want to do.

Here is the easy technique I use. Use forceps rounded at the tips with serrated tines, not pointy jeweler’s forceps. Grab the tick right down at the skin/mouthparts interface, and pull slowly, steadily straight back out.

The pulling has got to be such that you don’t tear the tick in two, but you make it uncomfortable enough so it will release its mouthparts pretty much on its own. Do it right and none of its mouthparts will remain in your tissue.

Have you ever contracted a disease from a tick bite?

To the best of my knowledge, no. It’s amusing. After a day of collecting I’ll wake up and find, say, an American dog tick—a fairly large tick—attached on my stomach or somewhere else. It may have its mouthparts embedded in me, but I don’t panic because I know how to remove it properly so it has almost no chance of transmitting disease.

I find them just attractive creatures and enjoy working with them. I’ve come home from the field covered with ticks, wake up the next morning and they are all over the pillow and everywhere else. That would bother the daylights out of some people – it certainly bothers my wife! But it doesn’t bother me. (Ed. It bothers us.) 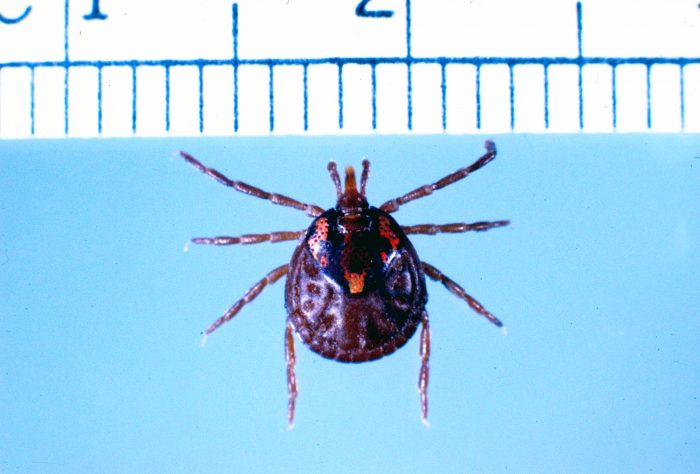 “Ticks have a peculiar beauty and have been called the butterflies of the acarine world,” Robbins says. Consider, for example, the lovely rose scutal ornamentation in the attached photo of a female of the Southeast Asian species Amblyomma supinoi. Despite their blood-feeding habits, it’s hard not to like such pretty creatures.”

Where do dog ticks mate? On their host?

Such ticks, which are so-called hard ticks, members of the family Ixodidae, usually do mate on their host and it is a remarkable process. The male positions himself under the female in such a way that their venters are adjacent, then various parts of the male capitulum [the “head” end of the tick, bearing the mouthparts] are introduced into the female genital aperture. A spermatophore [sperm packet] is then formed outside the male genital opening and transferred via the chelicerae [mouthparts] to the female genital aperture.

In what we call metastriate ticks [all hard ticks except those in the genus Ixodes], only the chelicerae enter, but in Ixodes the chelicerae and hypostome [another mouthparts structure] enter, and in a different family of ticks, known as soft ticks, the entire capitulum may enter the female genital aperture. This takes time and copious male saliva is generated in the process.

Often, when I collect ticks, I find them in copula [having sex] with the male, almost always smaller than the female, having his mouthparts inserted in the female genital aperture. A tick’s hypostome is packed with backwardly pointing teeth so a pair will stay attached even after I’ve collected them, killed them, and put them in a preservative.

After mating, the female dog tick lays an enormous batch of eggs, say 5,000, then shrivels up and almost immediately dies. From those 5,000 hatchlings probably only a handful mature into adults. 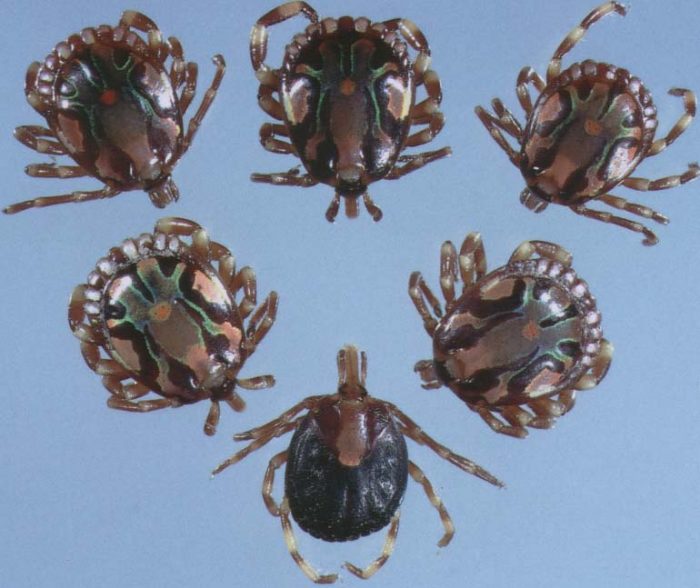 Why do so few reach adulthood?

After dropping off, a larval tick enters a stage almost analogous to what we see in a butterfly chrysalis: it needs to completely reconfigure itself into its nymphal form. The nymph then emerges from its larval shell and goes off to feed a second time. The same transformation occurs between nymph and adult.

Finding a host during each stage of their life is difficult and these ticks are prone to desiccation [drying out] before they do. Most larval ticks never find that nymphal host. Of the few that do, most of those guys are not going to find a host for their adult stage. 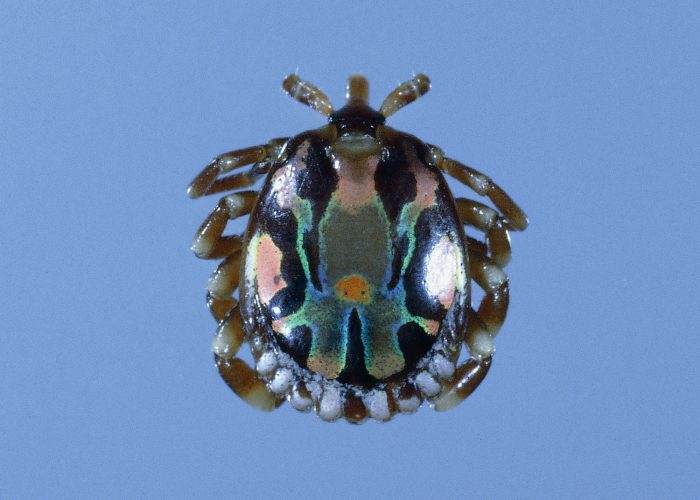 How do they locate a host?

Robbins: It’s called “questing,” they crawl out to the tips of vegetation and wait with front legs outstretched for a passing host to latch onto. Each of their two front legs holds a Haller’s organ that is sensitive to the chemistry of the air and can pick up host exhalations. Even ticks that lack eyes are able to sense changes in light and darkness. The shadow of a host going by is enough to get them excited and ready to latch on. Ticks are also sensitive to vibrations, if something is rustling the foliage, they will be persuaded to latch on.

To find ticks in abundance it is best to do so in early morning and late afternoon. That is when you can find them waiting at the tips of vegetation. Around noon, the heat of the day alone can dry them out, and most questing ticks retreat to the cooler ground-layer of vegetation.

Why are tick bodies so hard?

If you have to spend several days or weeks on a host getting a blood meal, you better be able to withstand that host actively grooming with claws, teeth and beaks or even rubbing against a fence post. You have to be tough. Ticks’ tough bodies also protect them against extreme temperature fluctuations.

But, as I said, not all ticks in the U.S. are hard ticks. We also have what we call soft ticks, members of the family Argasidae. Most people have never seen soft ticks, which look very different from hard ticks.

Soft ticks stay confined in animal burrows, nooks and crannies, tunnels, caves and do not take the long blood meals that hard ticks do. They feed for only a few minutes and then scurry back to their hiding place. 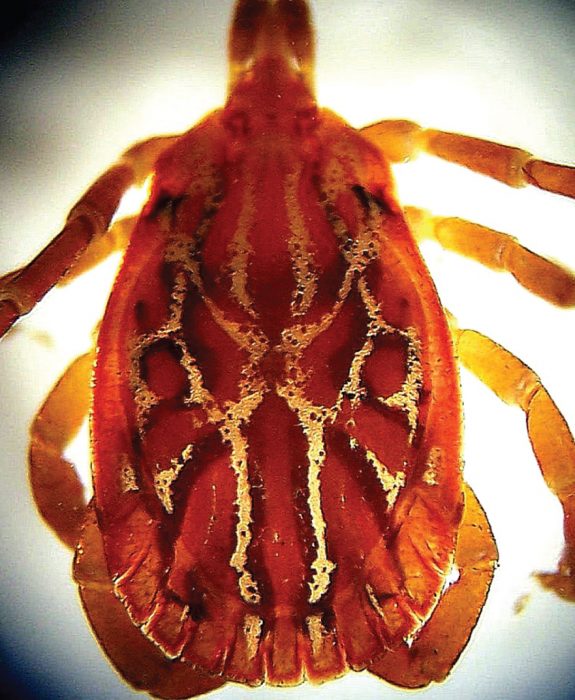 Do soft ticks feed on humans?

Yes. When you rent a cabin in the Rocky Mountains for a summer vacation, say, and are the first one there after several weeks or months, soft ticks will come out of the crevices between the logs and feed on you at night. But they only feed for a few minutes. They don’t attach, they take a quick blood meal – 15-minutes to half an hour – then scurry away. Theirs is a very different lifestyle than that of a hard tick.

A soft tick can have as many as 8 different nymphal stages, not just the one that you see in hard ticks. As you might imagine, this can make them quite difficult to identify as their morphology changes with each nymphal stage.

Yes. Soft ticks transmit some important diseases such as relapsing fever, in the same bacterial genus as Lyme disease spread by hard ticks, which can be quite a debilitating affliction.

As a soft tick feeds, it exudes a liquid, mostly water, through glands in the coxae, the basal leg segments, and those glands are often infected. The fluid excreted may contain something like, say, the bacteria of relapsing fever, something that is easily scratched into the feeding wound or into other skin abrasions. Soft ticks can be quite dangerous. There is a long list of diseases transmitted by both hard and soft ticks.

What are you working on currently?

I am a curatorial affiliate with the Peabody Museum at Yale and just finished identifying a series of tick collections from Mongolia sent to me by Yale personnel. I receive ticks to identify constantly from people all over the world. There are only about 800 tick species worldwide, and I can say I’ve seen most of them. I had seven years of experience with the National Tick Collection when it was here at the Smithsonian from 1983-1990.

Since I became a Smithsonian research associate in 2016, I have worked on at least 8 papers with Korean entomologists studying their tick fauna. There have recently been some new tick-borne diseases reported from Korea and we’ve been trying to get a handle on tick species in Korea, their seasonality, host relationships and their relationships to disease.

Two of the most recent papers identified 381 ticks belonging to three genera and eight species collected from migratory birds captured in mist nets for banding on Hong and Heuksan Islands in the Republic of Korea. A second identified ticks collected from nest litter and live and dead nestlings of migratory seabirds on six uninhabited Islands in the Republic of Korea during 2009 and 2014-2017.

The Koreans are very productive and keep me stepping, with one manuscript after another to work on. Overall, I’ve published about 20 papers with the Koreans in the last 10 years.

In 2018, I also published the book “Hard Ticks (Acari: Ixodida: Ixodidae) Parasitizing Humans: A Global Overview,” with co-author Alberto A. Guglielmone, a famous Argentine tick specialist. In August I plan to move to Laos for a while, as the Laotian Army wants me to teach them about ticks.

As if we didn’t have enough to worry about

The Amazing Trace: Blood molecules survive for millions of years

Which came first: The beak or the flower?