Home Art Eye to I: Self-Portraits from 1900 to today

Self-portraits can reveal narcissism, neediness, creativity and blunt self-awareness. Sometimes, an artist simply uses the nearest available model. Brendan Smith explores the truth we tell and the deception we practice when we curate ourselves.

Artists have created self-portraits for centuries, but today, everyone is an artist, posting millions of selfies and carefully curating our image on social media—demonstrating humanity’s unending narcissism or our unfettered creativity, depending on whom you ask.

National Portrait Gallery chief curator Brandon Brame Fortune pored over 500 self-portraits in the museum’s collection to select more than 75 self-portraits for Eye to I: Self-Portraits from 1900 to Today, which will be on view until Aug. 18.

The selfie phenomenon inspired Fortune to think about its connection to the long history of self-portraiture and how artists have used different media and methods to portray themselves in serious, sentimental, humorous, or melancholy ways. Their self-portraits offer a window into their thoughts about themselves and the development of their work, Fortune said.

“The idea behind this exhibition was to acknowledge the artists without whom the portraits that make up our collection wouldn’t exist,” she said. “What better way to do that than to look at their self-portraits? There’s such a variety of modes of presentation by the artists in exploring themselves.”

Artists have been creating self-portraits since the 16th century when mirrors became common, eventually moving beyond painting and sculpture into photography and video-based work as technology progressed. The exhibition, which is the last event in the museum’s 50th anniversary celebrations, includes a wide range of portraits from famous to less well-known artists, including Jean-Michel Basquiat, Diego Rivera, Chuck Close, Andy Warhol, Alice Neel, Elaine de Kooning, and Joan Jonas. 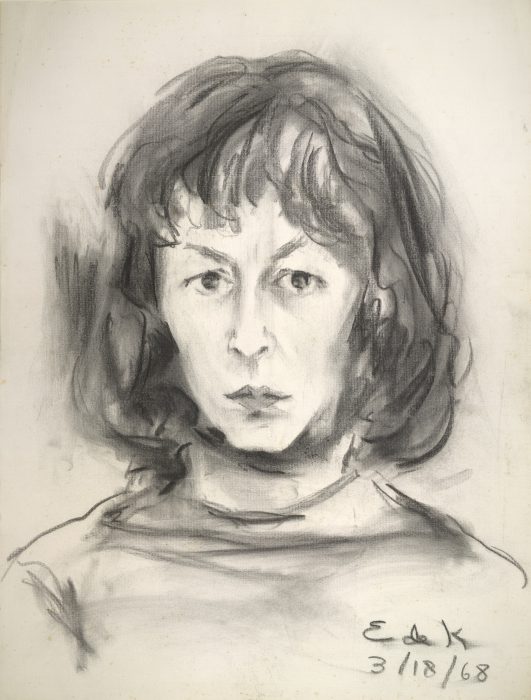 “It’s interesting to show work by artists who are well-known, but it’s really fun to discover artists you didn’t know,” said Fortune, who has worked at the National Portrait Gallery since 1987.

Fortune also organized a major exhibition of mid-20th-century portraits by Elaine de Kooning in 2015 and the first two Outwin Boochever Portrait Competitions in 2006 and 2009; she continues to serve as judge for the competition.

Some of the early 20th-century self-portraits in the exhibition are traditional renderings featuring a head-and-shoulders image of the artist, such as African American modernist painter Aaron Douglas’s finely detailed drawing from 1925. Other portraits run the gamut from grandiosity to stark realism. In Thomas Hart Benton’s Self-Portrait with Rita, the artist stands bare-chested in a heroic pose on a beach with his wife Rita sitting next to him in a fashionable one-piece bathing suit. Benton was enamored by the growing glitz and glamor of Hollywood, and he may have modeled his likeness after Douglas Fairbanks Sr.’s dashing character in The Thief of Bagdad. The swashbuckler silent film was released in 1924, the same year Benton painted his self-portrait. 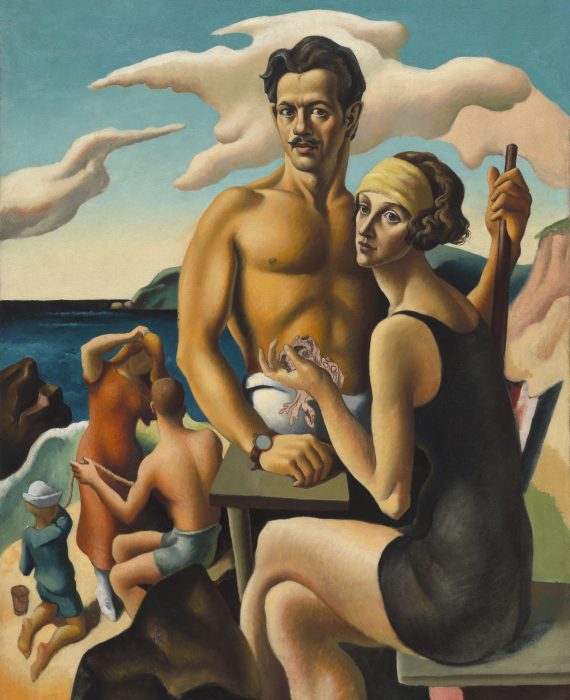 Alice Neel offers a stark counterpoint in her unforgiving nude self-portrait depicting her  sagging flesh and  mournful expression, perhaps contemplating the fleeting nature of life. Neel completed the painting in 1980, four years before her death at age 84. 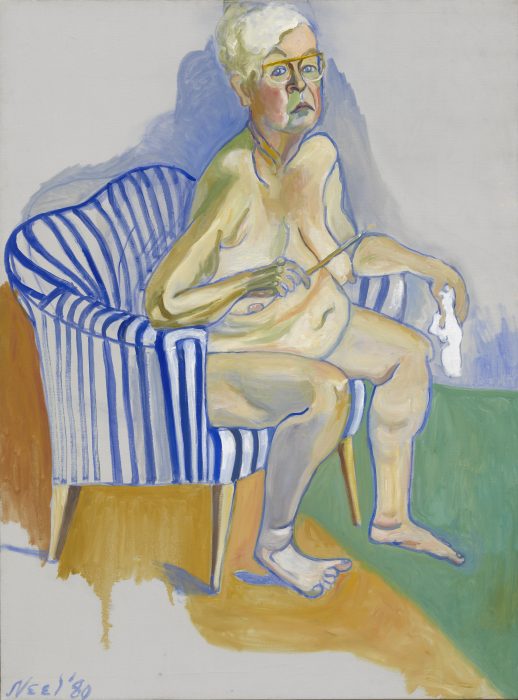 Photographer Philippe Halsman’s 1950 Self-Portrait on Tripod seems somehow ominous and humorous at the same time. His disembodied head has replaced his camera, balanced on top of a tripod that is held by one hand extending from inky blackness. Halsman was a famed photographer for Life magazine who produced more than 100 cover images for the magazine.

Jim Dine chose an empty floating bathrobe to represent himself in his first etching titled Bathrobe after being inspired by a New York Times ad in 1964. “There was nobody in the bathrobe, but when I saw it, it looked like me,” he said. The robe later was the subject of an exhibition of paintings at the Sidney Janis Gallery in New York. 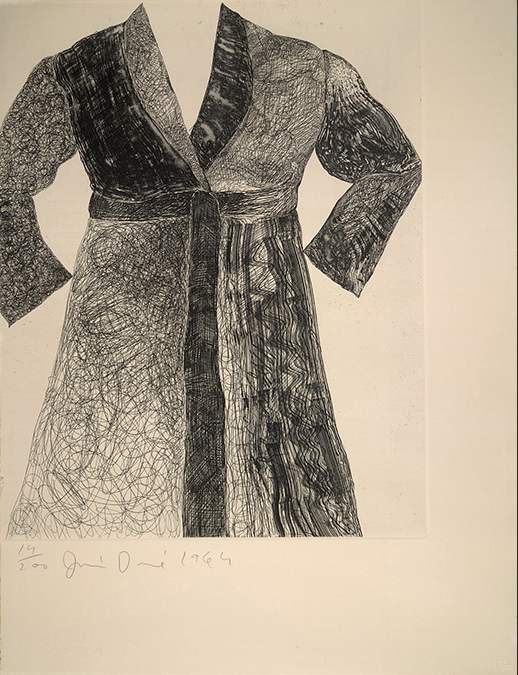 A giant printed reel of computer images represents Evan Roth in Internet Cache Self-Portrait. He collected images from his Internet browsing over several months and then used a software algorithm to print them onto vinyl sheets. The work creates a concrete record of fleeting digital interactions that might be lost or stored forever in some recesses of the Internet.

The self-portrait that most closely resembles the current selfie craze is Molly Soda’s 2017 video work Who’s Sorry Now. The voyeuristic video shows Soda sitting on a bed in a darkened hotel room. She is sniffling and crying while looking at her phone and taking candid unflattering selfies. In a National Portrait Gallery interview, she said she had a “need to show my ugliness or this side that I normally wouldn’t want people to see.”

“I think we all present a character online and we’re turning ourselves into these avatars and creating these two-D personas for people to see,” she said. “It really affects the way that people interact with each other because it’s almost like we’re not seeing everyone’s humanness.”

Eye to I: Self-Portraits from the National Portrait Gallery 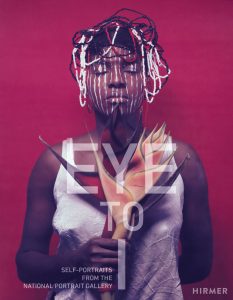 This richly illustrated book features an introduction by the National Portrait Gallery’s chief curator and nearly one hundred fifty insightful entries on key self-portraits in the museum’s collection. It enables the reader to come face to face with some of America’s most influential artists of the twentieth- and twenty-first centuries, like Edward Hopper, Beatrice Wood, Man Ray, Alexander Calder, Edward Steichen, Diego Rivera, George Gershwin, Elaine de Kooning, Louise Bourgeois, Andy Warhol, Robert Rauschenberg, Joan Jonas, Patti Smith, Jean-Michel Basquiat, Alice Neel, David Hockney, Chuck Close, and many more. Eye to I provides readers with an overview of self-portraiture while revealing the intersections that exist between art, life, and self-representation.

Brendan L. Smith is a freelance journalist and communications consultant with 25 years of experience with newspapers, magazines and websites. He previously contributed to Smithsonian Insider.

Putting a focus on Latino faces at the Portrait Gallery