Home Today in SI History Today in Smithsonian History: May 16, 1983 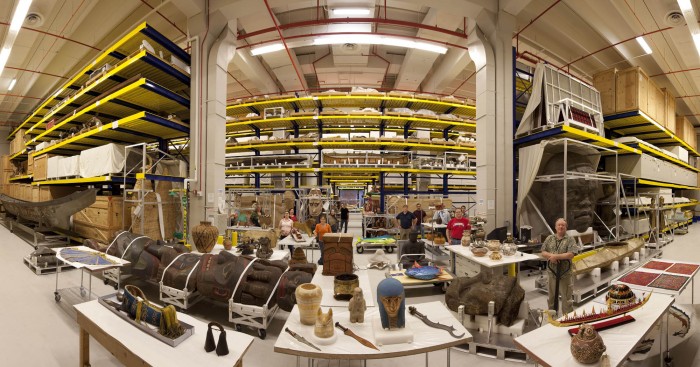 A panoramic view of Pod 4 at the Museum Support Center in 2009, with the Collections Support Staff and objects from the Anthropology Department of the National Museum of Natural History. In the foreground at right is one of the Smithsonian’s two Easter Island stone figures. (Photo by Chip Clark)

May 16, 1983 The Smithsonian’s Museum Support Center, a state-of-the-art Smithsonian collections management facility, opens in Suitland, Md., to house and protect millions of museum artifacts and specimens. The formal dedication is held on May 16, but Smithsonian staff were allowed to tour the facility from May 10-13.

The Museum Support Center is designed to provide optimal storage and conservation areas for the institution’s vast collections. There were originally four “pods,” laid out in a zig-zag pattern, so as to permit future growth. The astonishing variety of these specimens poses its own challenges. There are microscopic-sized organisms, tissue samples stored in liquid nitrogen at temperatures of up to -190 degrees Celsius, ancient marine mammal skeletons weighing thousands of pounds, sound recordings of endangered languages, and meteorites that need to be stored in special cases flooded with nitrogen gas to protect them from earthly contaminants.

The MSC remains a model for the high-quality housing of collections, and it continues to add cutting-edge facilities for the preservation and study of the objects, specimens, and data used by the Smithsonian in its core mission: the increase and diffusion of knowledge. 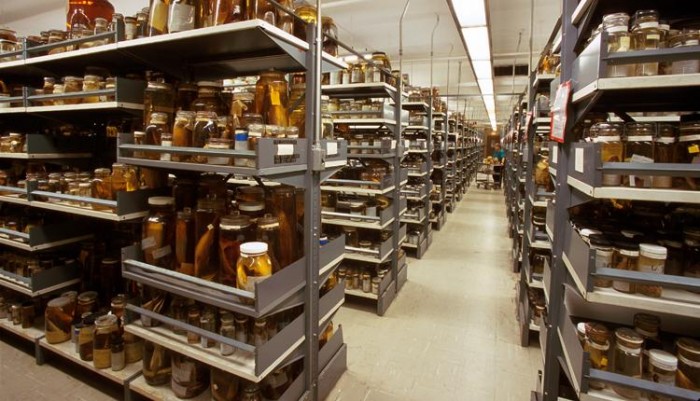 The National Fish Collection is also housed at the Museum Support Center. The collection was established in the mid 1800’s. The collections have great historical importance, containing, for example, marine fishes from the Wilkes Expedition and from the extensive U.S. Bureau of Fisheries trawling expeditions conducted by the Blake, Albatross, Fish Hawk and other ships in the late 1800’s and early 1900’s. The Smithsonian National Museum of Natural History Division of Fishes maintains one of the world’s largest collections of type specimens (important specimens on which taxonomic names are based), with over 19,000 lots housed in the collection. (Photo by Chip Clark)