As the saying goes, “If you remember Woodstock, you weren’t there.” John Troutman, Curator of American Music in the Division of Cultural and Community Life at the American History Museum, does remember. He shares some insights into the cultural significance of the iconic music festival.

The weekend of August 15 through 18, 1969, approximately 400,000 revelers traveled from near and far to inhabit the rolling fields of Max Yasgur’s dairy farm near Bethel, New York. There, some of the country’s biggest music acts, along with rising stars, performed at the Woodstock Music and Art Fair. 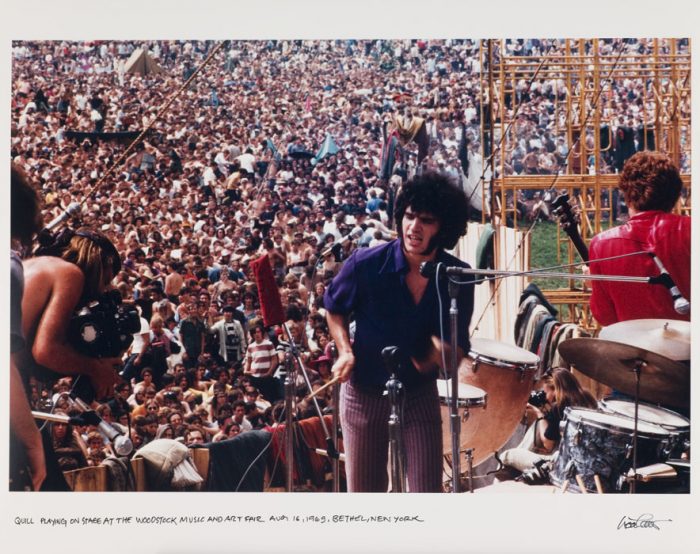 Woodstock was the largest of the 1960s countercultural music festivals in the United States. It left an indelible impression on not only the artists and attendees but also on the minds of millions of young Americans who experienced Woodstock secondhand—through news media accounts, a widely seen documentary film, and the consumer products that soon followed.

Some objects in our collection tell a Woodstock history—one that stretches far beyond that New York farm.

Woodstock was always intended to produce a profit. Organizers sold tickets in advance and began to punch them at the gates. However, ticket collection was quickly abandoned after throngs of attendees overwhelmed entrances and began entering through nearby gaps in fences. Organizers relented and ceased collecting tickets. 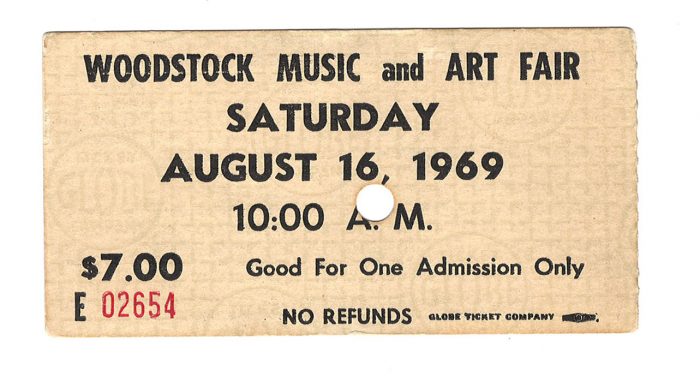 Ticketing abandoned, a huge crowd gathered. According to some accounts the festival was chaotic, and by others, ecstatic. 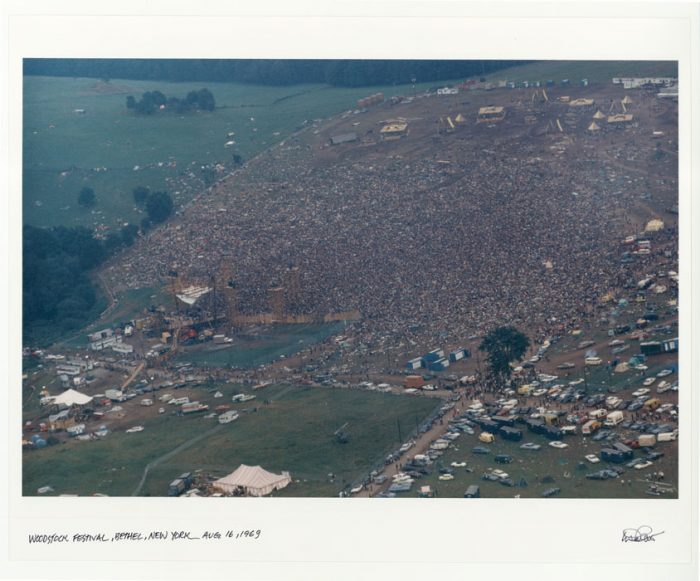 Photograph by Lisa Law. Woodstock Festival, Bethel, NY 1969.
Festivalgoers were awed by the crowd size, which revealed to them, often for the first time, that the number of like-minded souls in the country was far greater than they had previously imagined.

Photographer Lisa Law captured all this—from drenching rain and dwindling supplies, to awe-inspiring musical performances and expressions of community. Law even hitched rides in helicopters that were transporting food and medical supplies when the roads became impassable. From there, she captured the enormous scale of the festival. 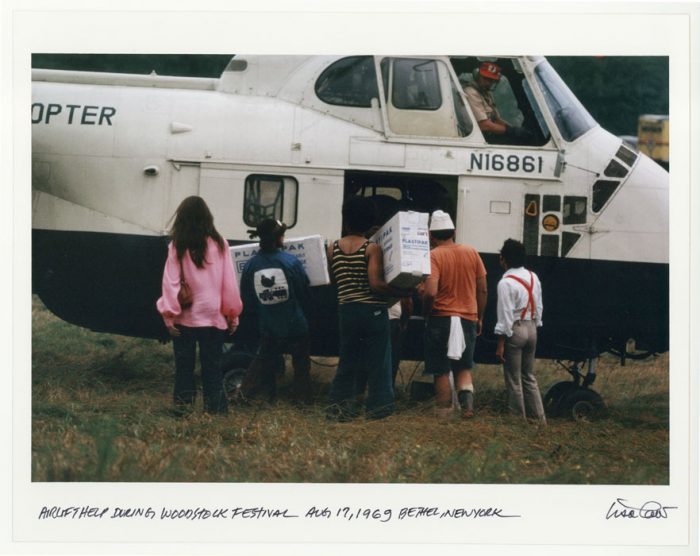 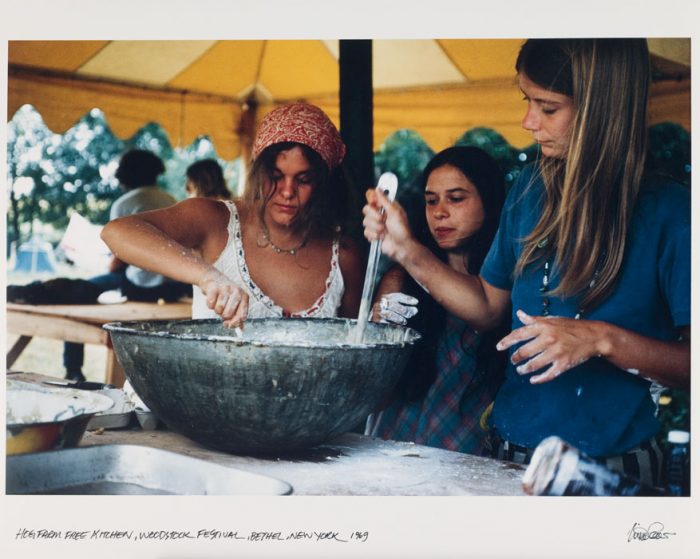 Photograph by Lisa Law. “Hog Farm free kitchen. Woodstock Festival. Bethel, NY 1969.”
Lisa Law captured the preparation of a meal at the festival’s free kitchen. The Hog Farm, a long-standing commune, volunteered to construct the kitchen for use by the festivalgoers.

Organizers of today’s music festivals generate much of their profit from selling a wide array of consumer goods onsite and online, including the ever-popular concert T-shirt. Organizers of the Woodstock festival provided T-shirts to staff and security; they did not sell them at the festival. Third-party vendors quickly filled the void, however, by selling clothing, posters, and other souvenirs. 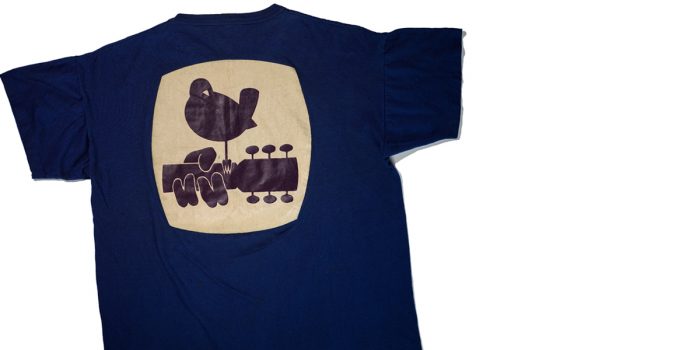 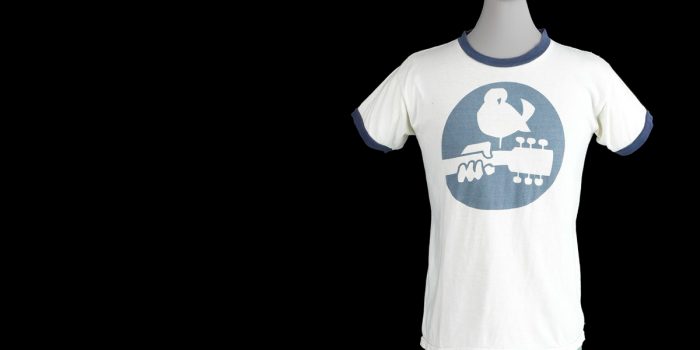 Three Days in Woodstock, Forever in Our Memories

Though several hundred thousand people experienced the Woodstock festival firsthand, the idea of Woodstock greatly impacted the lives of millions of others. Many Americans came to know the festival through news coverage, stories from friends who made the trek, and through Woodstock, the festival’s wildly successful, three-hour long documentary film, which premiered in theaters only seven months later. The festival’s cultural impact continued to grow. Many young Americans expressed their affinity for the values they associated with Woodstock by purchasing records and movie and concert tickets; wearing T-shirts; and hanging posters on their walls. 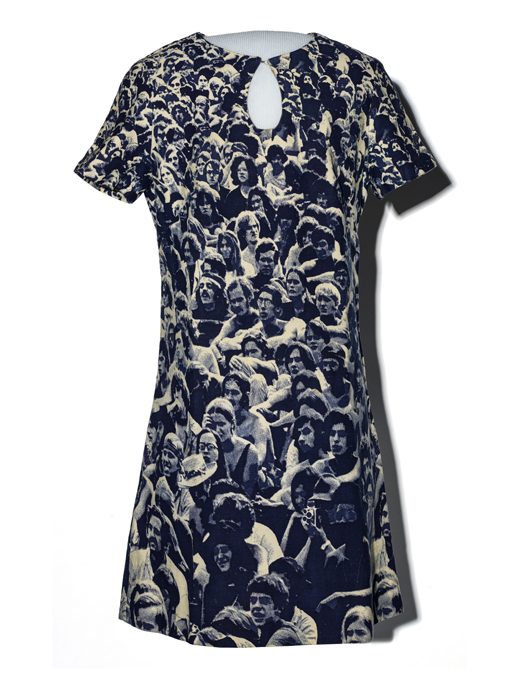 Irene Clurman was amazed to discover in 1970 that the local J.C. Penney in Gallup, New Mexico, was selling fabric featuring a photograph of hundreds of Woodstock attendees in the grass. Clurman grew up in Haight-Ashbury district of San Francisco, where she participated in political protests and gained an affinity for the neighborhood’s countercultural values. While she could not cross the country to attend Woodstock, she recognized the photograph, purchased the fabric, and made it into a minidress. She wore it “as a tongue-in-cheek celebration of love, peace, and rebellion,” she explained. “People only noticed the field of hippies when I pointed it out. If I didn’t call attention to the famous photograph, the message of the dress remained my secret.” 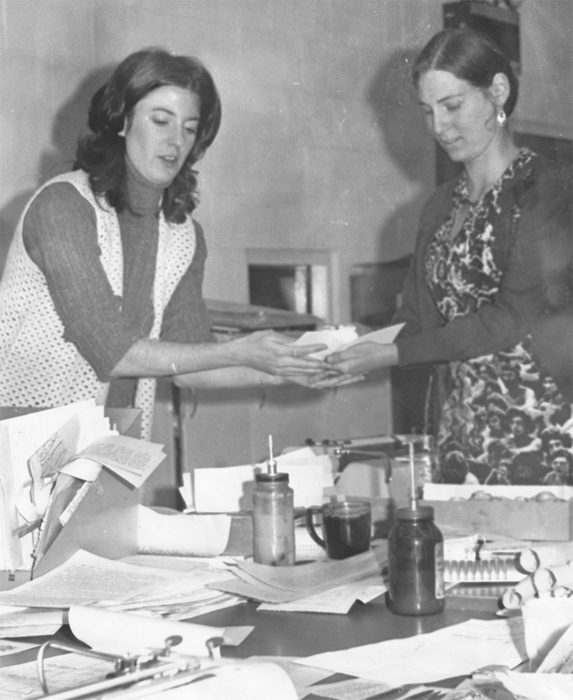 The fact that “Woodstock” fabric was on sale at a national department store chain less than a year after the festival demonstrates the extraordinary rate and degree to which Woodstock was commodified, rendered as a consumable for American shoppers. Yet Clurman’s use of the fabric—as a covert expression of her values—reveals that the meaning of Woodstock remained quite powerful, even when purchased, for those who saw its calls for peace and love as a sign of affinity and hope.

While some felt that Woodstock’s ever-expanding commodification and entrance into mainstream culture was at odds with the countercultural trappings of the festival, others considered this a victory—a demonstration that the simply expressed values of peace and love were beginning to deeply resonate in a country otherwise riveted by strife and unresolved social injustices. 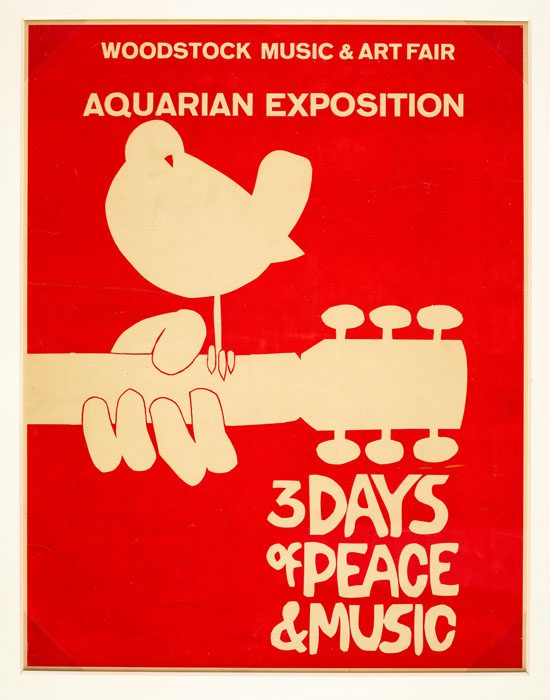 As time went on, the meaning of Woodstock continued to be highly contested. For those debating the impact of the 1960s counterculture movements, it served as a flashpoint. Some saw the festival as the embodiment of a utopian movement comprised of young people who believed that living by the simple mantra of “peace and love” could serve as an effective antidote to social ills. They recognized the power of music to bring people together, and discovered that their values, branded as countercultural, in fact had a tremendous and ongoing resonance in shaping our national conversations. For others, Woodstock represented a lost opportunity—a display by mostly white, middle-class attendees of hedonistic self-indulgence, rather than a nurturance of political galvanization and renewed social justice activism. For others still, Woodstock represented all that had gone “wrong” with the United States during the 1960s—the loosening of sexual mores, the woeful acceptance of widespread drug use, and the gleeful embrace of antiauthoritarianism.

50 years later, what does Woodstock mean to you?

This post by John Troutman was originally published by the American History Museum blog, “O Say Can You See?”