Dr. Maureen Wanjiku Kamau, Veterinary Research Fellow in One Health for the Smithsonian Conservation Biology Institute’s Global Health Program, has an update on how our scientists is Africa are studying black rhino reproduction. 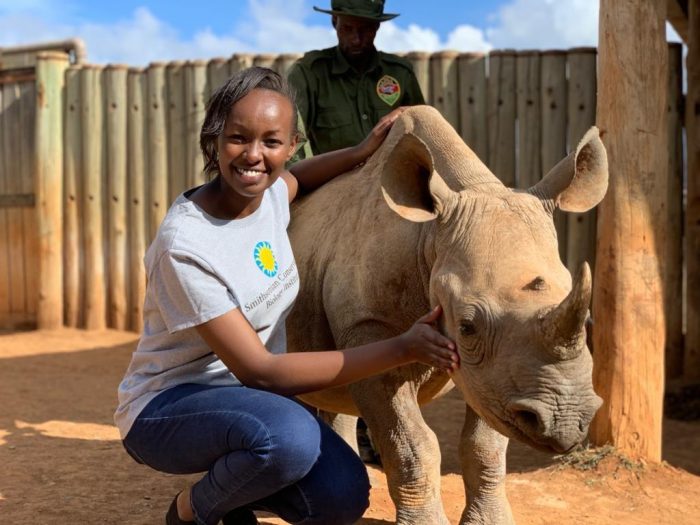 My name is Dr. Maureen Wanjiku Kamau, and I am a veterinary research fellow in One Health for the Global Health Program. I am based in my home country of Kenya, where I treat sick and injured wildlife, and conduct research and scientific training. 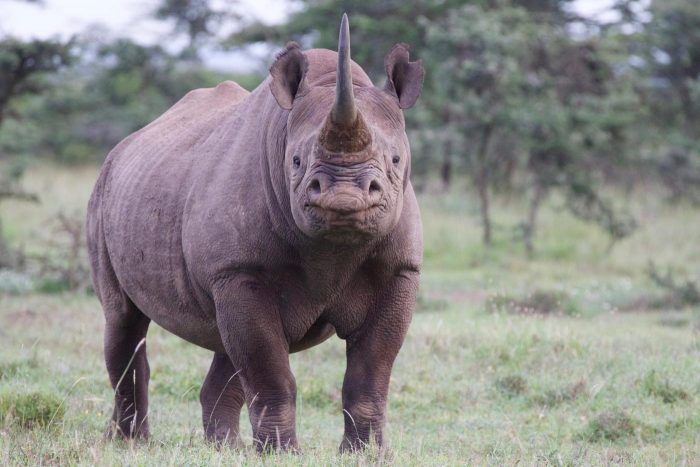 Great strides in conservation have resulted in the gradual recovery of Kenya’s black rhinos from less than 400 individuals in the late 1980s to 696 at the end of 2016. Intensive anti-poaching efforts have also reduced the number of poached black rhinos to less than 1% each year. But there’s still more to learn about saving this species.

Conservationists believe that reproductive drivers, such as hormones, are key to understanding black rhino population growth. In the region of Kenya where I work, they have observed that some female rhinos have many more babies than others do.

To understand this phenomenon, they are turning to hormones for clues. This is where our endocrinology study comes in; endocrinology is the branch of biology and medicine that deals with the endocrine system, which regulates hormones.

We want to know how variations in hormones relate to a rhino’s reproductive output — in other words, how changes in hormone levels, timing or cycling affect whether a rhino has babies at an expected rate.

To find out, we’re focusing on female black rhinos at Ol Jogi Wildlife Conservancy in Kenya. And we’re using a completely noninvasive way to monitor their hormones: poop! 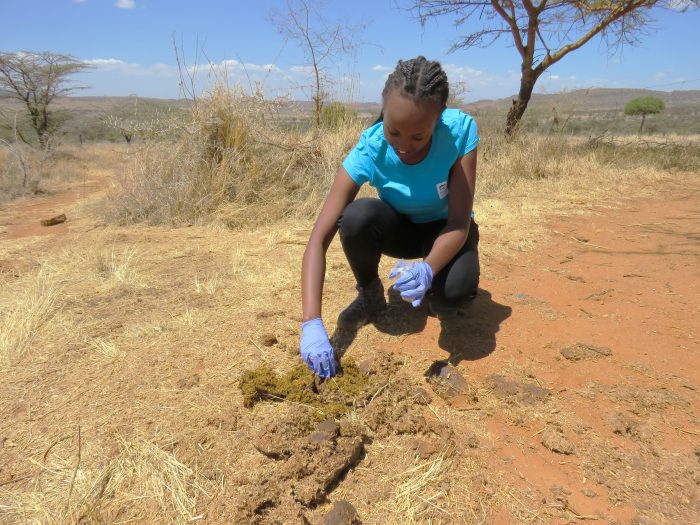 We can monitor reproductive hormones, called progestogens, without disturbing the rhinos by collecting and analyzing samples of their dung. Looking at these hormones over time gives us a picture of a normal reproductive cycle. We can also look for any abnormalities or variations, which could help us better manage and optimize rhino reproduction.

Our goal is to collect data on 17 breeding females using dung samples collected at least twice a week for a whole year. Rhinos at Ol Jogi have ear notches and some are fitted with transmitters, which helps us identify and monitor specific animals. 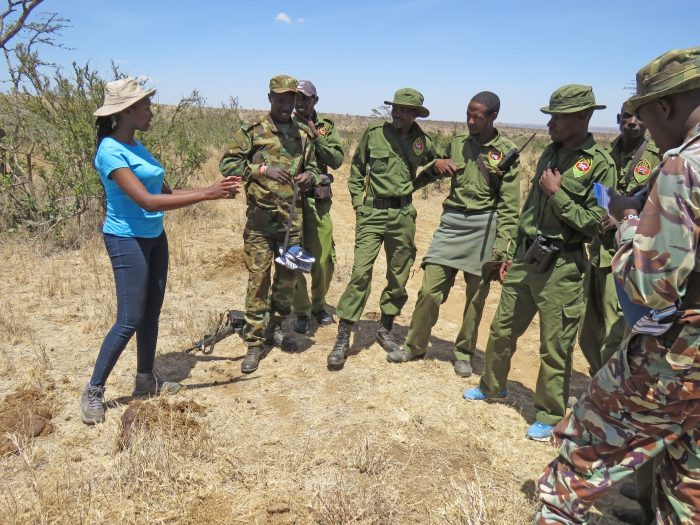 With the invaluable assistance of Jamie Gaymer, the conservation manager at Ol Jogi, we conducted a hands-on training session with rangers who will collect the rhino fecal samples each week. We used a “train the trainer” approach, training four rangers who then trained another seven.

The rangers have started collecting samples from just six rhinos, which will allow us to troubleshoot any challenges before including more rhinos in the study. We will also conduct refresher training sessions in the coming weeks. 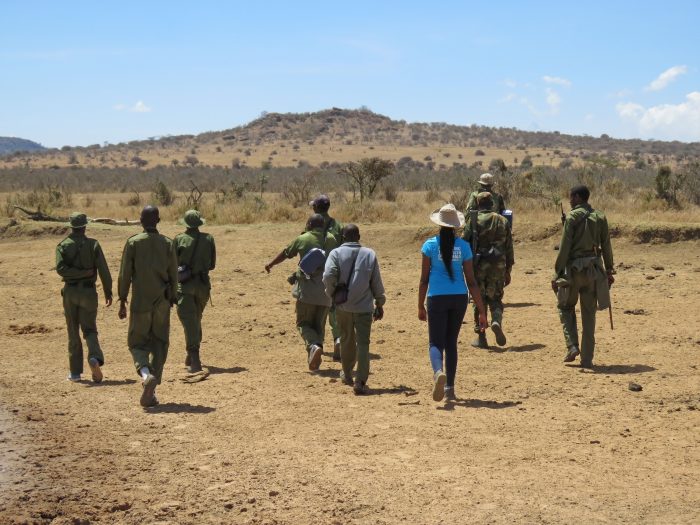 The rangers know firsthand that there’s nothing like the smell of fresh rhino poop in the morning. Their daily monitoring begins at dawn, which happens to coincide with the rhinos’ first bowel movements of the day. They collect the rhino dung samples in plastic bags, which are kept cool while they work.

We then store the samples in freezers to protect the sensitive hormones (progestogen metabolites) until we are ready to analyze them. Our approach not only contributes to the conservation management of the eastern black rhino, but also provides a more active research role for Ol Jogi management and rhino rangers who have been instrumental to the security and well-being of this critically endangered animal. 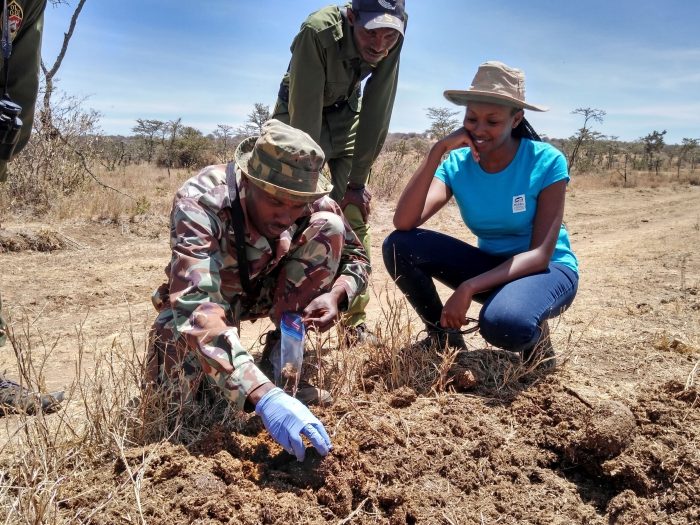 The study contributes to the capacity building of local collaborators, which is at the heart of the Global Health Program, and serves as a pilot that can be duplicated across other Kenyan reserves. The information we uncover will also be assessed in tandem with other studies geared toward securing suitable rhino habitat for population expansion, with the ultimate goal of strengthening wild rhino populations.

I look forward to sharing more of our rhino research in the months ahead. Stay tuned for updates.

This post was originally published by the Smithsonian’s National Zoo and Conservation Biology Institute.

A planet in peril