Home Feature Stories If it ain’t broke, don’t fix it

We really don’t know a lot about the relationship between insects and plants millions of years ago, but a new fossil discovery shows that some species discovered an effective method of ensuring their survival that persists to this day.

Some 165 million years ago in what is now northeastern China a small fruit from an extinct ginkgo tree (Yimaia capituliformis) fell to the ground, was covered in sediment, and ultimately left behind a clear fossil impression.

Recently that fossil was discovered and studied by a team of scientists, not so much for the fossilized fruit’s impression but for a series of scars that on the fruit’s surface: seven elliptical lesions spaced approximately 1 to 1.5 millimeters apart. These scars tell the story of how a certain insect species laid their eggs in the tissues of plant fruits tens of millions of years ago. 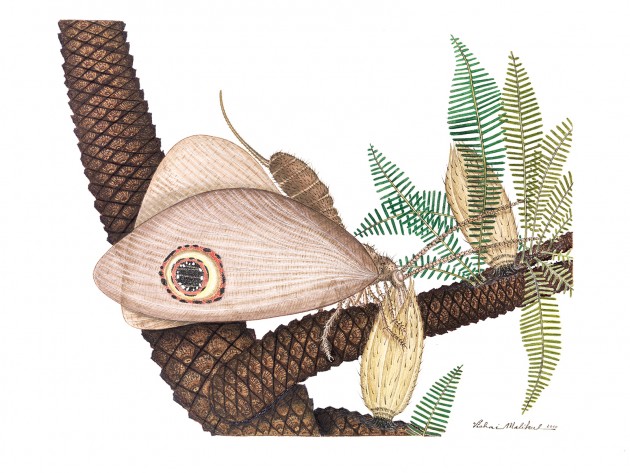 “This particular type of insect damage is very rare to see in a fossil, but it is a very distinctive damage type,” explains Natural History Museum paleoecologist Conrad Labandeira, one of the authors of a paper about the fossil in the journal Insect Science. The lesions were caused when the seven eggs were injected through the fleshy outer tissue, then the hard inner tissue, deep into the ginkgo fruit. Their fossil marks reveal the first time that this well-known, modern egg-laying method has been observed in fossils from the Middle Jurassic.

Labandeira estimates the insect that injected the eggs used a curved ovipositor (female organ for laying eggs) about two centimeters long strengthened along its length with reinforcing ridges and with a very sharp tip. Basically, it was a lance to slash deep into seed tissue.

The ultimate target of this impressive tool was the seed’s soft, innermost starchy and embryonic tissues, which were protected with a thick, fleshy outer seed coat and a harder, thinner, inner coat.

Egg-laying of the type illustrated by this fossil represents typical behavior among modern dragonflies and damselflies, Labandeira says. “The insect anchors itself on a leaf and its abdomen rotates on a pivot, inserting a set of eggs in a line or arc. They then move a little bit an do another arc. Depending on species there may be multiple arcs, each of several to as many as 15 or so eggs.”

However, an insect known as a kalligrammatid lacewing is the most likely species to have injected the eggs in the ginkgo fruit 165 million years ago, Labandeira says. Once hatched inside the fruit, the insect nymphs or larvae are surrounded by nutritious tissue—a strategy that almost assures their survival and rapid growth.

“The insect larvae feed off the innermost part of that ovule or seed, killing it,” Labandeira says. It’s a form of seed predation that may have been similar to the mutualism seen today between yucca plants and yucca moths, he observes.

“Yuccas have several seeds per pod, and if you go out and look you will see two or three infested with the larva from the same moth species that pollinate yucca flowers. The sacrifice of some of the pod’s seeds is what the yucca plant gives in return for being pollinated.” 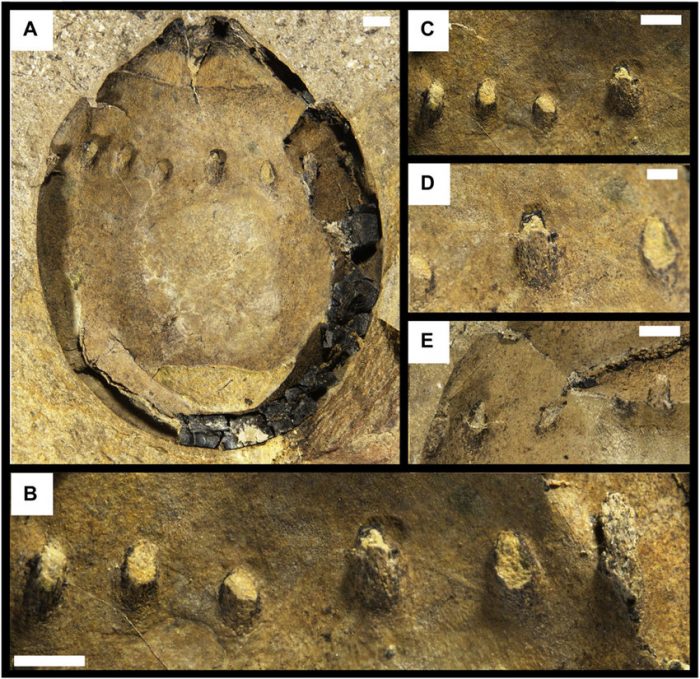 Injected deep inside the seed, the insect eggs and larvae also are protected from external insect predators that may eat them. Still, some plants present their own threats to insect parasites. Observed with a stereomicroscope, the scars on the fruit fossil each show thickened edges. This is evidence of a reaction by the ovule or seed known to create compressive pressure in the seeds of some plant species that can crush and kill an insect egg or larvae living inside it. Other times a plant may generate toxins that kill insect larvae.

According to Labandeira, the fossil shows no evidence that the seven insect eggs injected into the ginkgo fruit ever hatched. “All of the eggs were probably aborted when this seed died,” he says. “Some plants, when they have a heavy load of seed-infesting larvae that is clearly not in the interest of the plant, will actually drop the organ that has been attacked. This is what may have occurred here.”

Little evidence exists for the various defensive and counter-defensive behaviors that may have been deployed in the battle between insects and plants some 165 million years ago. Still, this recently discovered fossil is proof that a type of insect oviposition used today has existed for at least 165 million years. The geological longevity of this type of oviposition is proof of its effectiveness in the long-term survival of insect larvae.

Garden Stories: A celebration of gardening